When your eyes move so do your eardrums

When Your Eyes Move, So Do Your Eardrums
… and no one knows why.

Without moving your head, look to your left. Now look to your right. Keep flicking your eyes back and forth, left and right.

Even if you managed to keep the rest of your body completely still, your eyeballs were not the only parts of your head that just moved. Your ears did, too. Specifically, your eardrums—the thin membranes inside each of your ears—wobbled. As your eyes flitted right, both eardrums bulged to the left, one inward and one outward. They then bounced back and forth a few times, before coming to a halt. When you looked left, they bulged to the right, and oscillated again. 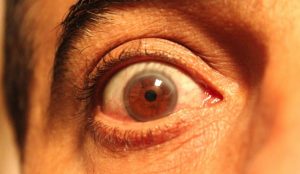 These wobbles happen every time you move your eyes, whether or not there’s external noise. The bigger the movement, the bigger the wobble. But no one knows why they happen. And until Jennifer Groh, from Duke University, discovered them, no one even knew that they happened at all.

Groh has long been interested in how the brain connects information from our eyes and ears. In a loud party, for example, we automatically read the lips of our conversational partners to interpret any unintelligible sounds. For that to work, the brain has to align visual and auditory information in space, so it knows that those sounds are coming from those lips. And that’s easier said than done, because our ears are obviously fixed on our heads but our eyes are constantly moving. They flit all over the space in front of us, roughly three times a second. Every such movement changes the spatial relationships between what we see and what we hear. So how does the brain unite those streams of information? And where? 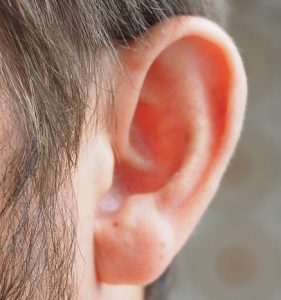 “Historically, people have thought that information enters the ear and the eye separately, and that eventually it’s combined,” says Nina Kraus from Northwestern University. But Groh’s experiment, she says, suggests that this act of combination happens much earlier. The eardrum, after all, is responsible for converting vibrations in the air around us into vibrations in the liquid within our heads. It’s where hearing effectively begins. And if it wobbles as our eyes shift, then this suggests that vision might affect hearing “at the earliest possible point,” says Kraus.

Kurtis Gruters and David Murphy, two members of Groh’s team, detected the wobbling eardrums in the simplest possible way. They stuck microphones in the ears of several volunteers, and asked them to look at different targets. As their eyes moved, so did their eardrums. Like actual tiny drums, these vibrating membranes created small sounds, which the microphones could detect. That’s how the team showed that the eardrum oscillations match the direction and strength of the eyes’ movements.

They also found that the eardrums start to wobble about 10 milliseconds before the eyes. This suggest that the ears aren’t reacting to what’s happening in the eyes. Instead, Groh says, “the brain is saying: I am about to move the eyes; ears, get ready.”

But why? Do these wobbles affect the ear’s ability to process incoming sound? “We don’t yet know,” says Groh. But she suspects that the wobbles are helpful to the brain in some way, perhaps in helping to match up the information from the eyes and ears. “I find it compelling that the movements are so time-locked and specific to whatever eye movements are occurring. It’s not just a little tic. It’s an informative signal.”

Barbara Shinn-Cunningham, from Boston University, also studies the neuroscience of hearing, and she is more circumspect. “It is a very interesting and previously unknown phenomenon, which may turn out to be incredibly important,” she says, “But so far, there is no evidence it is. We just don’t yet know why it happens or what it means.”

Groh adds that it’s not even clear if the wobbles themselves are important, or if they’re the result of some other change in the inner structures of the ears. Still, it’s clear that something is happening to the ears, and it’s intimately connected to what the eyes are doing. “This suggests that there are no safe spaces in the brain,” Groh says. “One sensory system is influenced by another right at the point where the physical energy is first detected.”

I can be found playing the violin since December 20th, 2011. Music is what feelings sound like... Victor Hugo
View all posts by coolpinkone →
This entry was posted in Blog. Bookmark the permalink.