Brain on Music
A Good Thing!

I don't think too many of us, who play an instrument, actually sit back & ponder over what marvelous things are taking place in our brains while we are playing... and what are the benefits?

Here's  a good video on the subject.

So, we're probably all in better shape than we thought we were (mentally)!

Fireworks in the brain is a good example. It’s just what it sometimes feels when you are trying to figure out some difficult point in your sheet music. 😄 Or when you succeed with it. 🎉

Actually I have read couple of articles, that playing an instrument will help kids to learn mathematics and other school subjects too, because their brains has more connections and are used to use more capasity.

There’s lots of research out there about how music affects the brain.  I didn’t take up the violin until my 40s, & sometimes I wish I had done it sooner.  Honestly though, I probably wouldn’t have spent the time on it if I had started earlier.  I probably would not appreciate it the way I do now.

Figuring out how to play something satisfies the aspect of what I did when I worked where I needed to problem solve, troubleshoot, etc.,  like what Ilona says above about trying to figure out some difficult point in the music.

But there is also a different thing with the playing—the immediacy of the moment that is not comparable to anything else.  Maybe it’s new neural pathways developing in the brain like the research indicates, the “fireworks”.  I don’t know.

Then I walk into a room with a purpose, and forget what it was I was going to do.  Guess that’s just my brain telling me it’s time to go practice.

Music has become singularly important for me because of the mental challenges it brings; these I am assured by the 'experts' will keep my mind fresher as it ages.

We all have our own reasons for playing violin, viola, cello or bass; but I think we all share the meditative state these wooden boxes put us in once we touch the strings with our bows.

Problem solving, troubleshooting and a meditative state... don't we also seem to get "immediate" gratification in those areas while playing our violin/fiddle?  (viola & cello, also)

Is it also possible that in the act of playing our instruments our brains essentially release more mood-enhancing endorphins?

There have been studies done that show positive interaction with a pet (petting your dog or CAT) can boost endorphins and maybe act like re-uptake inhibitors (SSRI's & SNRI's) for mood-elevating neurotransmitters.  This can relieve stress, maybe anxiety & depression or just give us a sense of purpose & well-being!

Maybe this is why we name our fiddles?

ELCB said
Is it also possible that in the act of playing our instruments our brains essentially release more mood-enhancing endorphins?

I’m sure about this. It doesn't matter how stressed I am, it magically disappears when I play my cello 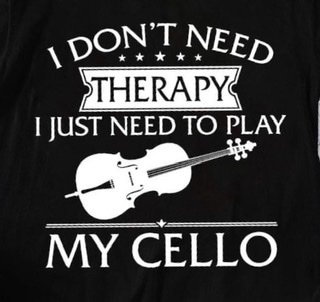