What's in a name?

What's in a name?
Choice of online name

I recently changed my online name for this forum from a pseudonym to my given name. When I arrived in the forum, I noticed that nearly everyone was using noms de plume, and I followed suit because it had the appearance of a tacit protocol and I was keen to fit in with the identity consensus. Yes, I've changed my mind (it happens).

For what it's worth, my pseudonym, "libraquarius" is a contraction of my astrological rising and sun signs; an artefact of more impressionable times in my youth. Again, minds do change as they mature.

Has anyone any strong feelings about this?

LOL - the original WordPress username you set up is still there - your new handle/nick is just an alias to it.

My WP login name is MadBill ( not mad as insane (I trust), it was mad as in angry about my initial introduction to the vagaries of the devil's instrument - so it was quite logical at the time )

I too had noticed the use of pseudonyms and well, arbitrary nick names, hence my original choice - but once I finally felt-in-control of the once-accursed-instrument and as it transitioned to become the love-of-my-life (thanks to FiddlerMan and the helpful folks on the forum) I thought a more appropriate nick would be less "threatening" ROFL.  So, it's my real name, Bill and the initial of my last name.

I'm well aware that I cannot change my WP username, but I just didn't want to be remembered by it; the 'known as' Peter is a lot more comfortable for me than an esoteric pseudonym. As I often tell my engineers, I'm a technician, not a magician.

Toni's smiley is pretty cool, and very pink. I haven't discovered the tool for doing those yet; oh, wait - I had Win10 installed on this PC yesterday: 🎻 I'll have a play, it's Friday

I use MoonShadows because I've just been using it for years on everything internet. It is the name of my property (named on a full moon night in August 1995) and the name of my business (MoonShadowsFarm). I like the name, but I also have my name, Jim, in my signature.

I use the logo from my Fiddling Blog as my avatar, but here's a real picture of me, ahem....not that recent, though. 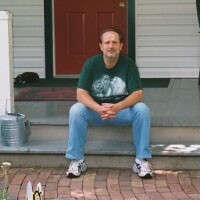 I checked out your blog, and I'll be following it. A name inspired by a hunter's moon is pretty cool.

Our property is a suburban house in southern England; it's called 'Wendy', and so not appropriate for me to use as a handle (coincidentally, I have a sister called Wendy). Yes, me and my eldest sister were named after the J.M. Barrie characters. Barrie was born in Kirriemuir, which is a great fun fiddle tune from Scotland (it has clean and smutty lyric versions). That's some chain of associations.

Some of those porch fiddling sessions on your web site look pretty crowded. Very impressive.

Thanks for the Follow, Peter. I just received the notification.

Yes, Wendy just would not fit you!

Hope you enjoy the blog. I like to write. It also helps me learn when I put what I have read, learned, or thought about (upon) into words. I haven't recorded anything in a while...lazy...and, probably because I work on the website very early in the morning when everyone else is sleeping. I get up at 3am. Perhaps during the Christmas holidays I will do some recordings of my progress.

Nice to meet you here Peter. I remember "libraquarius" and I remembered wondering about how that name came about. Interesting to read how others arrived at their names as well. Lots of references to the heavens!

A lot like Moonshadows I have had my name "starise" for a long time online and just havbitually began using it, though lately I have been using my real name online.

Though I have an interest in the stars and am constantly looking into the mars probes, Phobos, Titan and all of the other recent forays into space by NASA, I didn't pick the name based on concrete science nor did I pick it based on astrology. I am a pisces but I don't follow those horoscopes. You know they changed the calendar years ago. December was once the 10th month or deca...October was the 8th month octa for 8 etc. I digress though since it's a deeper subject than I can navigate here.

My name was chosen more on a symbolic basis. The stars were the smaller things primitive men seen from the earth with the moon and sun being larger. Kind of an odd eccentric way of looking at it, but I seen myself as a small star rising to eventually be with the "big star" lol. No scientific context whatsoever. Has a ring to it much like "Moonshadows". On my website I call myself "Celtic Starise" further confusing the heebeegeebees out of everyone. That word "Celtic" has almost no real concrete context in terms of the music in which it is used today. IOW If I looked for celtic music the web could point me to hundreds of different types of music that don't have much to do with one another. A romanticized concept that sometimes sounds a little like the music of the ancient peoples of Scotland, Ireland and others. If it were a recipe often maybe only 20% of it is actually traditional music mixed with other ideas. I claim some responsibility for that confusion

It's certainly a theme, the mystical and mythological origins of people's online pseudonyms.

The name 'libraquarius' was first used 35 years ago, when I had a casual interest in 'new age' ideas. As with any belief system, it looks a bit ridiculous when you realise you didn't in fact believe it after all.

Elsewhere, I'm known as 'hengist'; I use this name where I discuss programming or electronic hardware. Hengist was a Jute (ancient Dane), and was the first Jutish king of England. He had a brother called Horsa. When I was young, our local ferry port for crossings to the continental mainland (Newhaven) had a pair of car ferries called Hengist and Horsa, run by a subsidiary of British Rail, which carried passengers and vehicles across the English Channel. The name Hengist stuck with me.

I also use my amateur radio callsign (G1INF) when discussing radio and electronics online, as that identity is unique (issued on behalf of the International Telecommunications Union).

@Peter - Good to point out that you were libraquarius. I may not have noticed otherwise.

Yes, @Fiddlerman - one of the motivations for this thread was to candidly and explicitly declare the name-change to the entire membership, thus not leave people (including admins!) wondering where libraquarius went after two and a half months of dialogue and engagement.

Perhaps if my nom de plume were a little more representative of my character, I'd have retained it. It works for many; you are, for example, the Fiddlerman.

True. I remember how happy I was when I was able to buy the domain.