DIY Violin Case Gortex Fabric Humidifier (Will It Chooch?)
In the interest of adding mirth to the Forum, I report on my experiment with making a Gortex (tm) fabric case humidifier with "Crystal Accents" gell balls.

First off, let me say that I have been very happy with using small plastic food containers, modified with the addition of drilled holes in the top, with fragments of wet cellulose sponge.  But I was curious to see if I could do something more high tech (though on a budget).

Edit:  In my original post, I failed to mention that Gortex (tm) fabric has the interesting property of releasing water vapor but retaining liquid water.  By constructing a violin case humidifier utilizing both Gortex (tm) fabric and gell sphere hydration beads, you create two levels of protection to prevent liquid water from leaking out of the humidifier to do damage to the violin and case.  My previous experience with hydrating a guitar with a silicone tube enclosing a thin strip of cellulose sponge was that too small amount of water was available to the system, and needed almost daily replenishing to work.  The proposed system uses several ounces of water and should last for weeks to months without replenishment.

I first purchase a square yard of military type camo Gortex (tm) treated fabric for about $10 on eBay.  I then went to the hardware store and got a 1-1/2" diameter ($1.50) and 2" diameter ($1.70) PVC Schedule 40 pipe end cap, stainless steel pipe clamps to fit ($0.80 each), and o-rings ($0.60 each).  We were nearing the end on a plastic jar of peanut butter, and I noticed that the end cap might work, so I kept the top ($0.00).  I thought that I might be able to secure the humidifiers from the exterior of the case with magnets, so I gathered some disc magnets and double sided adhesive tape from shelf stock.

I had heard about gell beads that florists use in arrangements, so I went to the local florist and got a quart of the hydrated beads ($5 for quart).  The worker took pity on me and told me that the Florist obtained the beads from Amazon (product called Crystal Accents) for $4, which makes several gallons worth of beads.  They used distilled water in a covered bucket to hydrate them.

The fabric was difficult to cut with a pair of scissors so I used a box cutting blade, cutting around a ceramic soup plate.  I weighed the assembly of fabric, PVC end cap, clamp, and o-ring on a gram scale and recorded the weight with a Sharpie.  I added the gell beads and clamped the fabric on the end cap.

I was unable to attach the humidifier within a Fiddlerman violin case (likely plywood), and only got a slight attraction in a Cecilio CVN 600 case (likely cardboard).

If I travelled with the cases, I would obvious investigate other methods of securing the fabric to the PVC caps due to the possibility of instrument damage from the stainless steel clamp.  I ended up putting one of the humidifiers in the storage area of the Cecilio CVN 600 case, since there was no where else to put it.  There were many places to put a humidifier in the Fiddlerman case.  The only humidification method I could see for a standard Cecilio case would be an "f" hole insertion tube, since there is no area to put anything in those cases.

I purchased a digital R. H. meter from Harbor Freight to monitor the experiment and I will keep a record of case humidify and water weight reduction from the gell spheres.  I will attempt to reuse the gell, but I likely have several years supply from the quart of spheres I obtained from the florist.

I don't think that the humidifier I made from the peanut jar lid will be useful since it did not have enough volume.  I think that the 1-1//2" diameter pvc end cap will prove to be the ideal size.

If anyone wants some gortex (tm) fabric for their own humidifier, let me know since I certainly have a lot left over.  I took photos but since I have trouble advancing paragraphs here, I doubt that I will be able to attach them.  I will try. 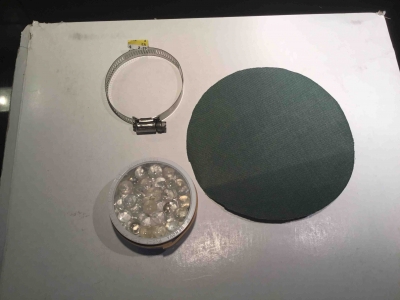 My "Mark 1" Goretex case humidifiers are working well, but I am not satisfied with the appearance of them, I would like to see the gell balls shrink as the water evaporates, and the stainless steel clamps are certainly not optimum.  I was thinking about the use of clear PVC pipe end caps, but found them prohibitively costly ($15 each).  I was also thinking of replacing the stainless steel clamps with reusable zip ties.

A quick trip to the grocery store allowed me to procure some baby jars in various sizes.  They are now about 1/4 the size of those I remember from years past and can easily fit into a violin case.  The metal caps are now screwed in place with the pastic that also provides an o-ring seal with the glass top of the jar.  The jar is obviously transparent.  And at $1 each they are very inexpensive.  Onward to "Mark II."

I found that the metal cap on a baby food jar was very thin and it proved to be quite a difficult task to bore a hole through it without causing distortion to the rim.  I did do it by the use of a electrician's knock out punch set (Harbor Freight), but the exposed metal edge will likely rust.  This was getting beyond the ability of a DIY project.

I then came upon Mark III.  I found inexpensive 120 ml polycarbonate bottles with a nice plastic cap with integral seal.  I will post a picture later.

I managed to take a photo of the Mark III case humidifier, a package of the "Crystal Accents" and the Harbor Freight digital humidity meter.  Here goes 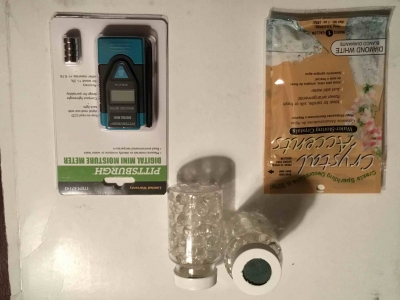 I'm curious how it works

I removed the first versions of the humidifiers from the violin cases after about 3 weeks (to replace them with the current version).  One case was at 48% relative and the other case was at 51% (read using the same digital meter).  Half of the water weight in the gell spheres remained to be available for use in the humidifiers after 3 weeks.  I placed the old gell spheres in a container of distilled water to regenerate them for future use.

I am looking for a larger container for use with guitar and mandolin cases.  My current thinking is to use clear plastic peanut butter containers.

Hi damfino (and others).  I got this idea from the Oasis humidifiers, but if you look at the Amazon reviews of the Oasis humidifier, many people complained that after a few months of use, the adhesive used to secure the Gortex (tm) to the slots in the plastic container gave way and the containers leaked water.  This can be very damaging to wood and varnish.  Since the active material in Gortex (tm) is Teflon (tm), it stands to reason that it would be difficult to secure with an adhesive.  My method uses conventional gasket materials and should not have a problem with leakage.

Another benefit is that the purchase of a square yard of Gortex (tm) for $10 yields enough material to do hundreds of humidifiers.

I don't believe that the Oasis humidifier uses aclear plastic bottle, and it is important to visually determine the size of the gell spheres to determine how long a period of time remains before the gell spheres need to be changed (and regenerated).  I tried the weight method and that gets tedious.