The New Old Guy Re-Entering the String World
A personal view of the start of a journey into music and the viola.

Only half an hour tonight. Wasn't going to practice at all, but decided to try out Cluck Old Hen that I got from Chris Haigh in the form of a violin PDF that he used in an instructional video. Way beyond my expertise, but what the hay, it's worth a shot. Transposed it to alto clef in the key of G, but will probably have to transpose up about a third to hit the lowest notes on my viola.

Adventures in stringing along! lol

I'm feeling slothful! Skipped practice yesterday! I have excuses, but that is just what they are, excuses, not valid reasons for missing a day. Got an hour and 10 minutes in today, playing Dawning of the Day, Song from a Secret Garden, Amazing Grace, Sound of Silence, Ashokan Farewell, Danny Boy, Scales, Improv. including a little while listening to Pierre's Acoustic Blues Shuffle (what a joke on my part!).

This was all after adding a chamois covering on my chin rest. This is part of a larger piece I had laying around that was intended for cleaning my car, but never used! Not very neat right now and held on by a rubber band. But I have got to say, it really helps me a lot with my fuzzy face! 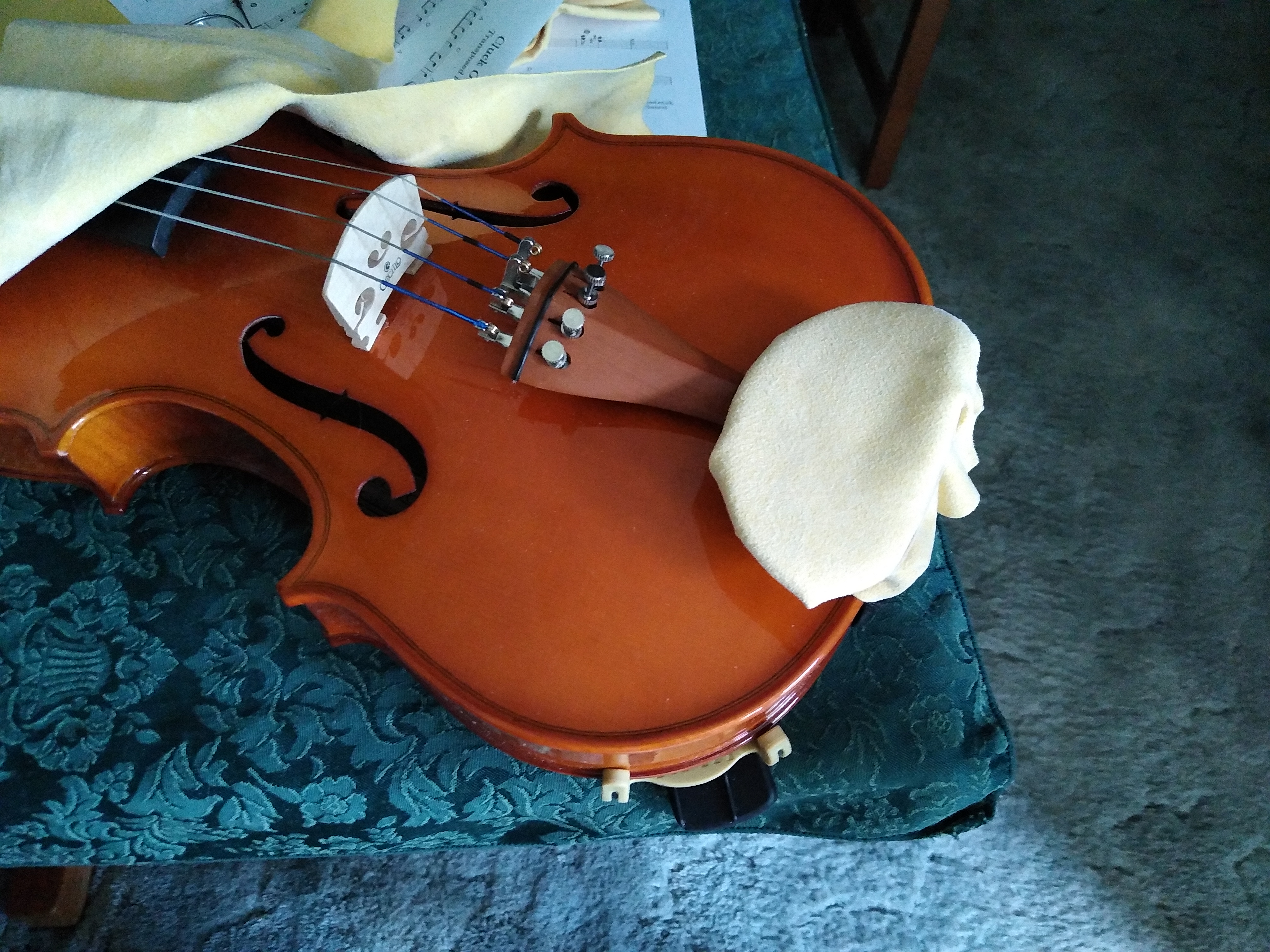 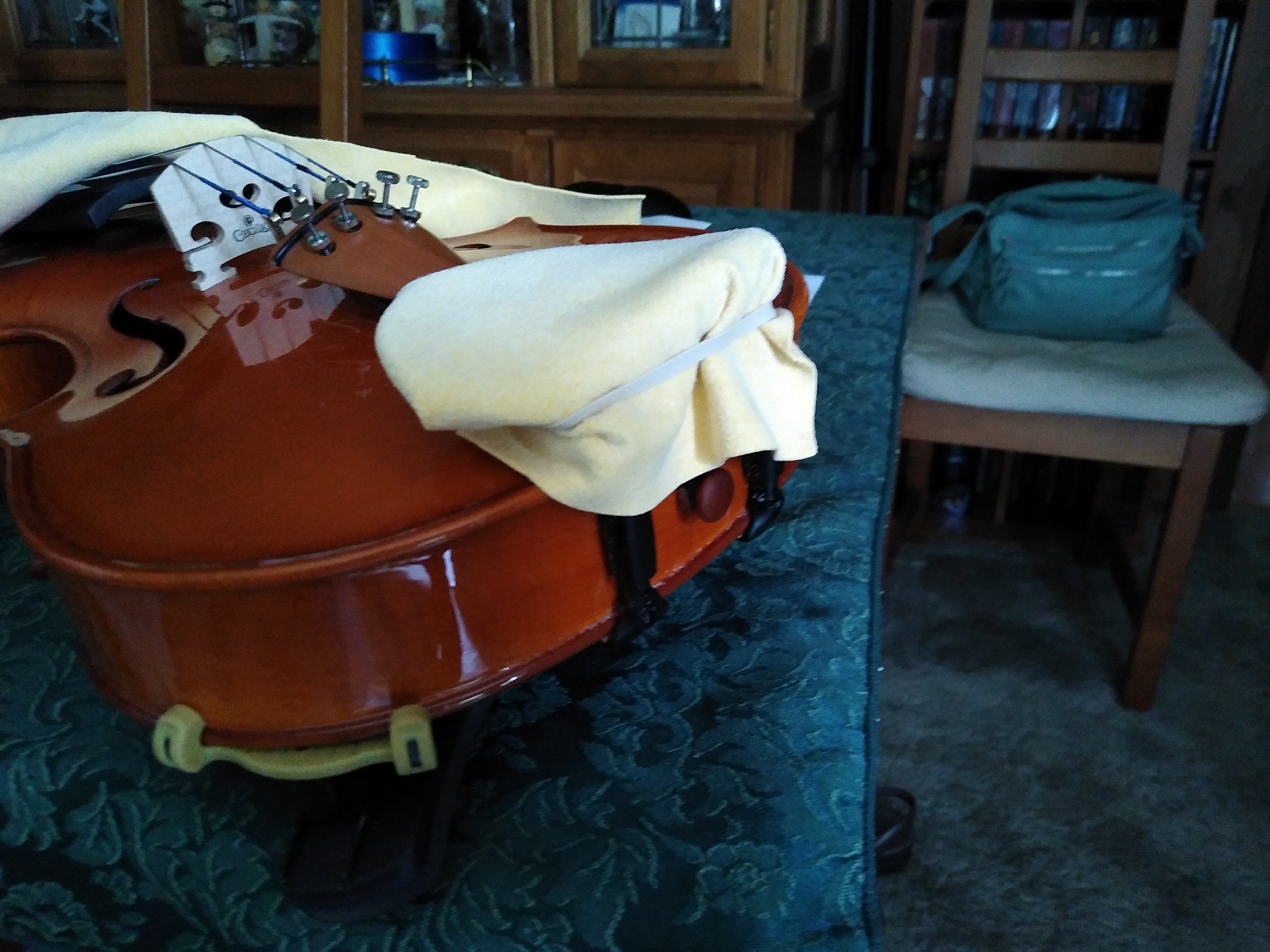 It took me an hour and half to record a 1:34 video today! I don't think it turned out great and took entirely too much time, but it's another milestone in my quest (or is that millstone?) to achieve competence. It was recorded for and added to the @stringy "slow tune party". The one thing I'm happy about is that my bow pretty much avoided the bridge and finger board!

@Mouse - Thanks! It's just so frustrating trying to get a video good enough to share!

70 minutes again today. I somehow am starting to run over on my practice sessions which is a good thing, because it means I'm enjoying myself too much to keep accurate track of the time! Played the usual Dawning of the Day, Song from a Secret Garden, Amazing Grace, Sound of Silence, Ashokan Farewell, Danny Boy, Scales, and Improv. But also added a beginning of "Something Stupid". Wanted something a little faster than my usual and the repetitive notes keeps it from being technically too difficult for me.

I swear, JohnG, I think you can see my music stand. I have been doing Something Stupid since Fiddlerman had that video. Well, to be honest, I have been doing something stupid at least once a day, like, forever. Seriously, I am working in that one. It isn't part if my lesson plan, but it is one I allow myself to do on the side,

@Mouse - It was his video that got me thinking about  it, also. Not working on it much, but just kind of a filler.

Today was another 70 minute session, playing Dawning of the Day, Song from a Secret Garden, Amazing Grace, Sound of Silence, Ashokan Farewell, Danny Boy, Scales, Improv., Something Stupid, and added @Fiddlerman Etude #2 Learn the notes on the D string transposed for viola

I took his pdf into MuseScore and changed the clef. I then needed to re-annotate it since MuseScore pdf to mscz doesn't bring that in. Here is the result:

How did you like the D string workout? If you are pretty far along, it might not have been such a work out, but it is a bigger stretch on a viola. I did it again about half hour ago.

@Mouse - The D string etude was good. Trying to get proper pitch was not simple, but doable. I like the exercise and will continue with it until it becomes fairly natural.

The etudes continue to interest and frustrate me, since I still can't play them flawlessly! lol Since I have it in MuseScore, I'm going to create another copy for the G string. I know I could just follow the same pattern on the string that I use for the D string, but I'm still embedding the alto clef in my brain and don't want to confuse myself by playing what isn't written.

The reason for wanting Fiddler's Green is that I'm veteran of the 1st Cavalry Division and they have pre-empted this poem as their "own".

Halfway down the trail to Hell,
In a shady meadow green
Are the Souls of all dead Troopers camped,
Near a good old-time canteen.
And this eternal resting place
Is known as Fiddlers’ Green.

Marching past, straight through to Hell
The Infantry are seen.
Accompanied by the Engineers,
Artillery and Marines,
For none but the shades of Cavalrymen
Dismount at Fiddlers’ Green.

Though some go curving down the trail
To seek a warmer scene.
No Trooper ever gets to Hell
Ere he’s emptied his canteen.
And so rides back to drink again
With friends at Fiddlers’ Green.

And so when man and horse go down
Beneath a saber keen,
Or in a roaring charge of fierce melee
You stop a bullet clean,
And the hostiles come to get your scalp,
Just empty your canteen,
And put your pistol to your head
And go to Fiddlers’ Green.

I posted a question concerning the picture below in "The Viola" sub-forum in the thread, "What should be the next bow upgrade?" Just wanted to note it here, but will watch and answer in the proper thread. 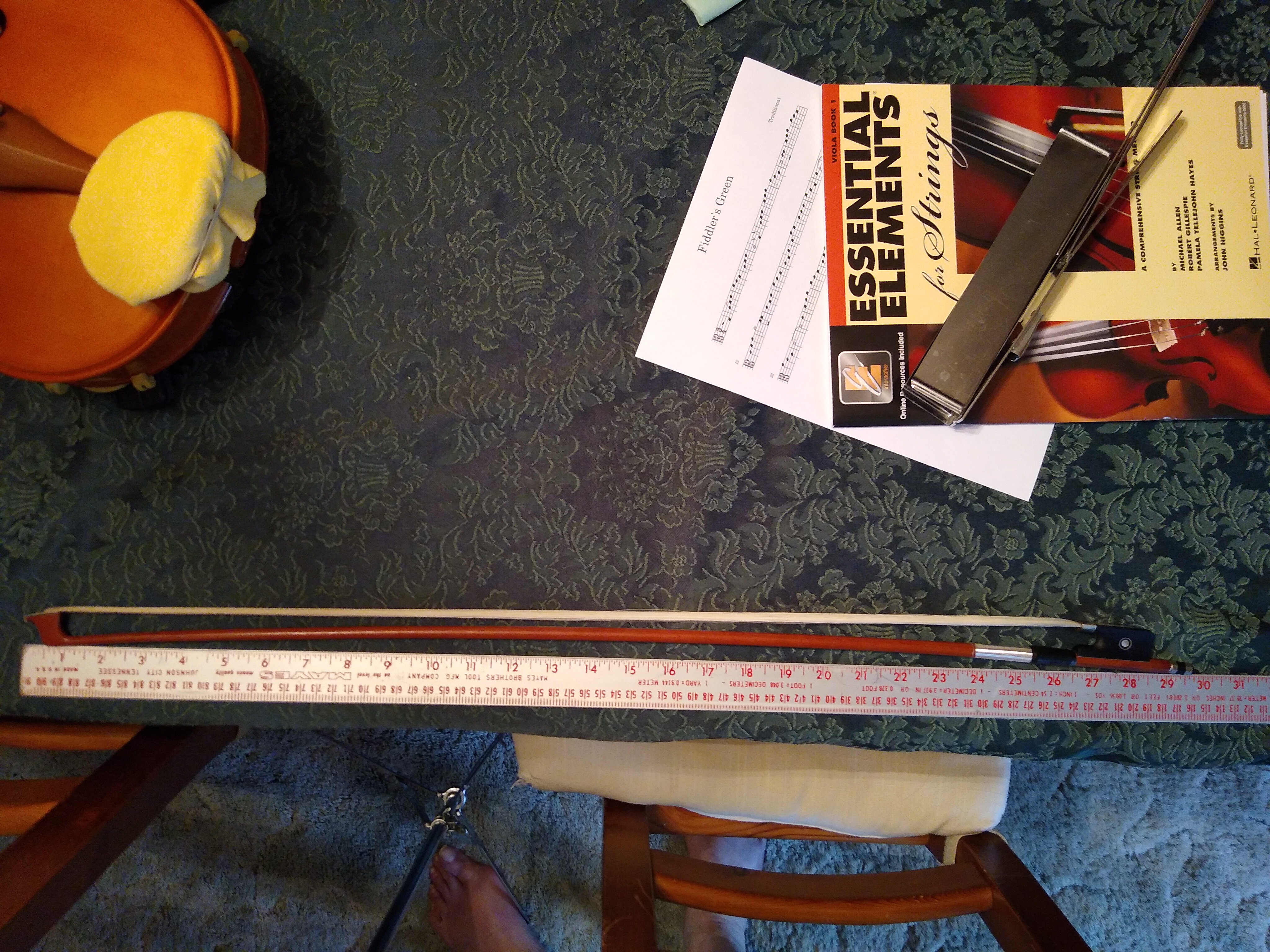 Not a great practice today. After an oral surgeon meeting and driving an hour and a half round trip to take care of some things for our vacationing son and family, didn't get practice in until 7:30pm. So even though I got an hour in playing Dawning of the Day, Song from a Secret Garden, Amazing Grace, Sound of Silence, Ashokan Farewell, Danny Boy, Scales, Improv., Something Stupid, Fiddlers Green, and the D String Etudes, it was not the best session. More than usual scratchy notes and poorer bow control.

At least tomorrow is another day!

Got an hour's practice in yesterday, but couldn't post this update until today because of forum problems that started last night! Played the usual Dawning of the Day, Song from a Secret Garden, Amazing Grace, Sound of Silence, Ashokan Farewell, Danny Boy, Scales, Improv., Something Stupid, Fiddlers Green, and D String Etudes. Another fairly late session, 7:00 pm local, but it went better than the previous night. I would call it a sporadic session, some really good, others atrocious. Good to poor bow handling, good to poor intonation, and some problems with reading alto clef and translating it to finger placement.

I keep hoping it will all come together one of these days, and I will be able to just play easily and emotionally, rather than always needing to be analytical.

Got an hour in today, at 2:00pm local, and the time differential really helps. Much easier to play. Did something different, though. First half hour was going through the Hal Leonard Essentials for Strings, Viola Book 1 and playing lessons 1-46. Started off with the pizzicato but changed over to bow after only about 15 lessons. I had decided I needed to get back to basics. The rest of time, I devoted to Cluck Old Hen, Dawning of the Day, Song from a Secret Garden, Amazing Grace, Sound of Silence, Ashokan Farewell, Danny Boy, Scales, Improv., Fiddlers Green, and D String Etudes, doing quick run throughs except a little more time on the etudes.

I think I need to do more of Pierre's early lessons, too, including more of the etudes after I transcribe them for viola.

Sounds like you are very aware of whatbyou need to do.

Not the best session, but definitely not the worst!

In my back (or is it actually starting) basics effort, I practiced the Skill Builder section noted for about 15 minutes of the practice session and then played @Fiddlerman's D String Etudes (as transcribed for viola). This served, not only as a warmup, but hopefully will also actually improve my skills.

The rest of the session seemed to be smoother than I've experienced lately.

I think the first tune in this set fits that description when played like he does which brings up a great point.. inveatigatr tunes you normally hear faster and see if playing slower fits.

here is the sheet music

@ABitRusty - Just watched the video again, and now I've gotten the sheet music, changed the clef and transposed to E minor and am going to attempt this. Don't expect to see results for some time, but know I'm thinking of (and thanking) you!

Briefly ran through Caislean An Oir, and even with my not always getting the C#/C natural correct, seems like a very nice little tune. Will add it to my daily practice until I can actually play it properly. Once again, thanks @ABitRusty.