I have issues with C and C#, also. I hope you get the spacing right soon.

JohnG said
Briefly ran through Caislean An Oir, and even with my not always getting the C#/C natural correct, seems like a very nice little tune. Will add it to my daily practice until I can actually play it properly. Once again, thanks @ABitRusty.

hey cool @JohnG youre welcome.. I like the slower version he does in that track but there is another album out there he recorded with P.J. Hayes, his father, where they play it up tempo.  I like 'em both but that slow one he does solo is haunting to me.  Seems like when I play along with the recording its in Dm or G dorian but as you know you can transpose to any key you want.  If you get to a point youre trying to play to it and something sounds off, take a look at that and see if it helps.

heres the more up tempo version.  they may be in another key than the other one.

... Seems like when I play along with the recording its in Dm but as you know you can transpose to any key you want...

You're right, it was in Dm, which I transposed in MuseScore to Em which is much easier for me at this time.

@JohnG or could be G dorian..same notes but home note sounds/feels different.  lets call it modal minor and be done with it 😁

D minor should be much easier to play - only has Bb.

Don't know if this will help - you still need to change to Alto clef.

The Golden Castle (Caisleán an Óir) in Dm

I saw a version on MuseScore that had a few other odd notes thrown in - this version ONLY has Bb and should be much easier.

I chose this instead of looking at thesession.org because you hear it slower and can be slowed right in the YouTube video settings to listen to, right now.

ELCBK said
D minor should be much easier to play - only has Bb.

Don't know if this will help - you still need to change to Alto clef.

The Golden Castle (Caisleán an Óir) in Dm

I saw a version on MuseScore that had a few other odd notes thrown in - this version ONLY has Bb and should be much easier.

I chose this instead of looking at thesession.org because you hear it slower and can be slowed right in the YouTube video settings to listen to, right now.

@ELCBK - Thanks, the one I used was in Dm which I changed to Em because I have been playing mostly sharps, and still have not learned to play flats! In addition, the tuner I use to check pitch only shows sharps and not flats and the translation from A# to B flat is not easy for me. The few odd notes, sharps and naturals, enhance the mood of the piece, so I'm happy with those.

Isn't it funny how going backwards for a flat, rather than forwards for a sharp messes up your brain? But, sharps are always taught first, and not integrated with flats, so it is a switch. I don't handle switches well.

"Could someone turn on the lights? I can't get the switch to work!"

@Mouse - Yes, 'tis true! I did find out that my tuner CAN show flats instead of sharps. Sent a message to Peterson Strobe Tuners, and got this message back in just over an hour, which may help others since I couldn't find this information in the user manual or on the website.

The StroboClip HD can be set to display accidentals as sharps, flats or a mixture of both.
You can choose which by doing the following, first switch the tuner OFF, then:

Tunes are getting easier with the Skill Builders and D String Etudes practiced first. I find I need more new tunes to keep me interested even though they probably don't do much to improve my playing overall. Many of these tunes are only played through once or twice, so they are not progressing as much as if I concentrated on only one or two, but so be it!

And that was the rest of the flat story!

Mouse said
And that was the rest of the flat story!

That is VERY helpful! 🤗

I haven't been using my tuner a lot, so haven't checked it out thoroughly.

I do have a problem no one else does... my 5th peg sits right where my tuner screen wants to be on my left!  Still better than on the other side of the scroll where my hand blocks the view - I'll have to putz around with it some other time.

Tunes were generally only run through once each, but the new ones, Misty Mountain from The Hobbit, and Slan Le Maigh were tried out more thoroughly to try and figure if they were playable by me. I think I can handle these, eventually.

Only 40 minutes tonight, left until late and had some physical issues that put me off. Still got a little in on Essential Elements119-124 Skill G Maj, D String Etudes, Fiddlers Green, Skye Boat Song, Caislean An Oir, Misty Mtn, and Slan Le Maigh. A little frustrating.

Going to post a query about how much to tighten the bow. We'll see what answer(s) I get.

Decided not to post a bow tension query. I found a quote from @Mouse that answers the gist of what I was going to ask, " I was always told you should be able to put a pencil between the hair and bow, at is narrowest (center area) place and it will just touch the bow and hair. At that point the hairs have been tightened enough." I've been giving three twists of the frog screw from it's "just loose" position which appears to be about one complete revolution. Unfortunately for me, this definition doesn't work because when the screw is "just loose", the bow hairs are a pencil width from the the bow already! So I guess, in the meantime, I'll just continue using 2-3 twists.

@Mark - Thanks for the response in the "Bow Tension" article. I guess if you keep a finger's width on your bow, the 2-3 twists I give mine will be adequate unless I learn differently.

Had a good practice today, 20 minutes on the Skill Set in G Maj and Pierre's etudes. Total time was an hour and twenty minutes. Got going and didn't want to stop!

I've noticed that other than Pierre, I'm one of the few to post a YouTube channel as part of my profile. Am I the only extrovert? One of the things I'm trying to do now is to help promote the Violaman site. If you see what my YouTube page looks like, it includes a link to it. 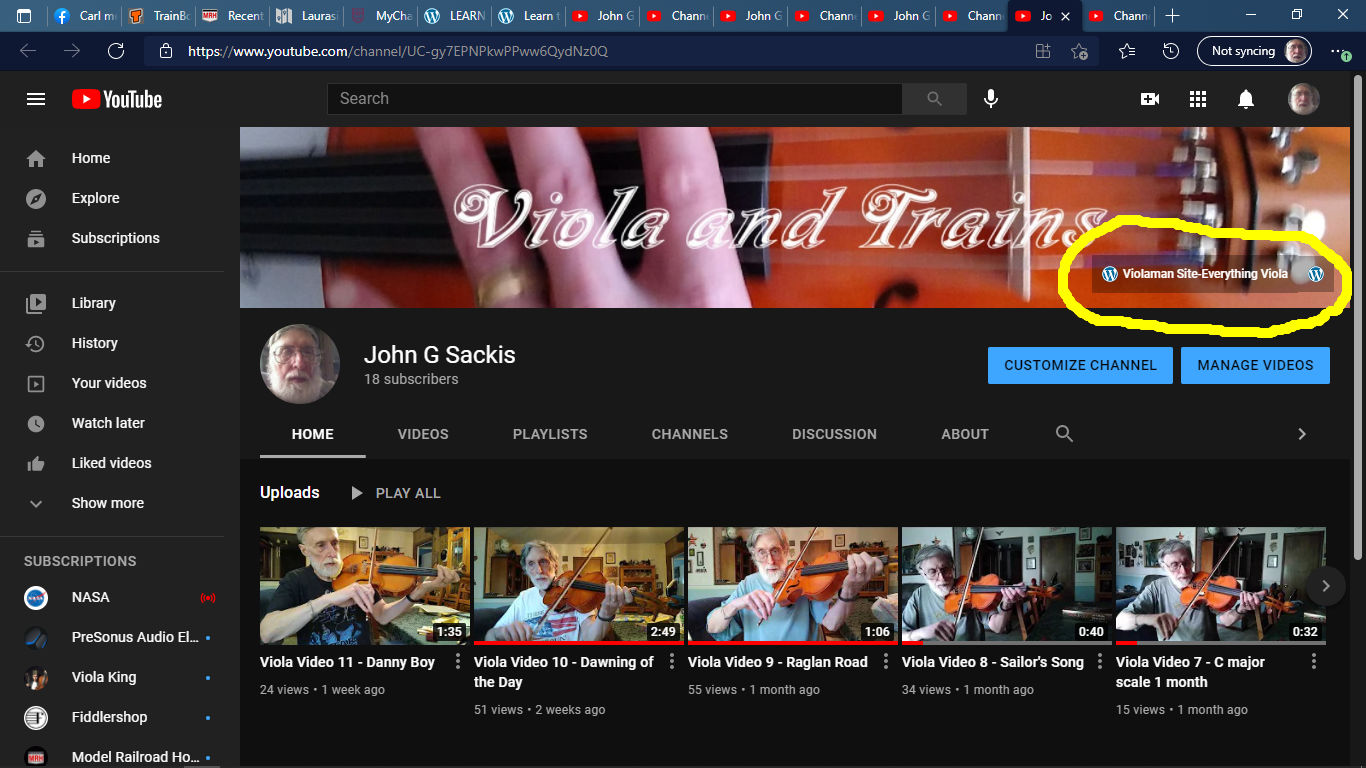 @JohnG and others.  Steven Colbert interviewed the actor Hugh Jackson last week (for reference, the date of post is 7/21/2021).  They showed a clip of him practicing tap dancing.  A strobe tuner display was projected on a flat screen video monitor.  They were using the strobe tuner to give real time reference on the performer’s tap cadence.

I had not thought of using a tuner for that duty. 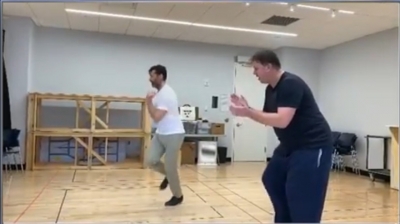 @Irv - Frank Zappa would be proud.

@JohnG Thanks for the advertisement!

@Irv - Ingenuity is a good thing!

Skye Boat Song is so bleepin' simple, yet I'm still having problems with it! On the other hand Fiddler's Green is technically more difficult but it is improving steadily. Maybe because I relate to it more. (In case you missed my reason My earlier post on Fiddler's Green).

I'm finding it amazing that I continue to look forward to practicing when my earlier forays into musical instruction did not hold my interest for long nor did I want to practice all the necessary bits that are necessary for proficiency.

@JohnG and others.  I recently discovered a new quote of particular interest to all things related to string instruments.

”No lesson seems to be so deeply inculcated by the experience of life, as that you should never trust in experts.”  Lord Salisbury