Mouse said
Hey, JohnG, don't forget to vote for the project song, if you haven't already.

After another two days without practicing, put in an hour and twenty minutes tonight, playing all the usual stuff. Didn't start until 7:30pm local, so wasn't as fresh as I should have been and had the usual good and mediocre.

On a different tack, I went to a local shop, "The String Project", in Palatine, IL. I had them check my viola out since I don't know how much of my problem is me and how much, or any, is the instrument.

I sent the following to the FiddlerShop and am awaiting a reply.

The luthier checked it out and a teacher/owner played it and they told me two things that should probably be done and I would like your opinion. In addition, they suggested a new bow.

1) They feel the nut is too high and I measured it when I got home and the string is almost exactly 1 mm from the finger board on all four strings.

2) The bridge also is too high and when I measured the height of the strings from the finger board closest to the bridge, I found they were 6.2-6.3 mm, except for the A string which was 5mm.

3) The bow seems to be warped and without sufficient curve when hairs are loose.

Does their assessment on the first two seem justified? Is a $45 charge to do the work seem fair?

Which lower cost bow would be a relatively good replacement. About $50-$60?

We shall see. I don't think I want to put much more money into this viola and may suffer with it until I can see if I improve enough to warrant getting a new one.

Sorry, to hear that - guess that's why Fiddlerman doesn't recommend that brand. 😕

🤔... if you like your Viola sound otherwise, think it would be worth it to get it fixed.

I would imagine, especially since covid kept normal traffic restricted in retail & service shops, with shop overhead they'd have to charge a minimum for anything that would take up to an hour of labor - so don't think that's unreasonable.

Good for you being able to tell something wasn't right!

I wouldn't have been able to tell until I'd been playing longer or compared another instrument.

Speaking of other instruments, did you look at/listen to, or try any other Violas while you were there, for comparison?

Got a response from Pierre at FiddlerShop.

There assessment is very reasonable and they are correct. Doing so will make it more comfortable for you to push the strings down to the fingerboard.
As per a new bow, you really can't get much for $50-60 but if they have a nice Carbon Fiber bow, you'll get something much better than what you would be getting if you purchased an inexpensive wood bow.

We have this Fiddlerman Carbon Fiber bow that people love at around $68. I know people who use it professionally.

So my decision is to spend another $115 or just wait until I can get a new one from FiddlerShop.

Hour and ten minutes today, playing the usual, plus went back and tried Ode to Joy, one of my earliest pieces and was very gratified that it was so "easy" to play. Guess I'm actually improving.

Did you already get the nut and bridge lowered?

@Fiddlerman It has not been taken in yet.

Another hour and twenty minutes today playing the usual suspects and really enjoyed it. I tightened the bow more than usual until the bow stick was practically straight, and it seemed to help the scratchiness a bit, or my technique was just better than usual. It only took one more twist. Who knows which helped? Not me! lol

An hour and a half playing the usual. It was especially fun today for some reason. More run throughs on some of the pieces and more improv, which I enjoy. Cleaned the bow strings off a bit after getting some really scratchy notes. This was only dry wiping them with the wipe rag and also cleaning off the strings, which seemed to help.

I'm still holding off on getting the nut and bridge fixed for the time being, but may do it in the future.

It's strange, it seems as though knowing there are actually problems with the viola and bow, has allowed me to enjoy and improve a bit more.

Had to share this picture from a FaceBook group that I belong to, "Articulated Comic Book Art" as it was especially striking to me because of its title, "Simple Sunday" which reminded me of the "Simple Gifts" video I did. 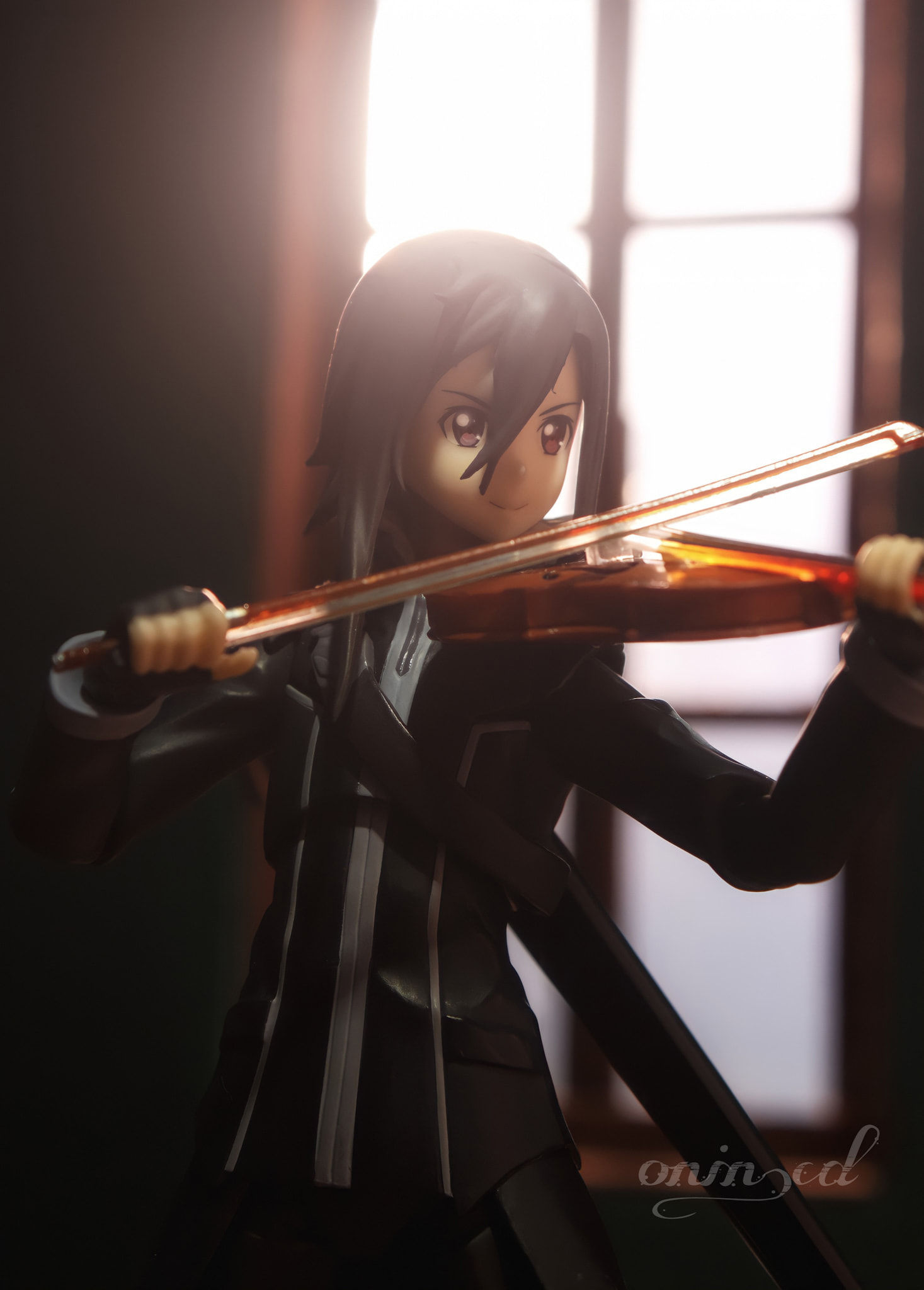 Something a little different today. Only practiced an hour and it was only the etudes, Ducks on the Mill Pond, Greensleeves, and Simple Gifts, and some Improv. Part of the reason I've had so many tunes is that I'm still learning the alto clef and trying to read it naturally rather than identifying a treble pitch and translating up a note.

I knew there had to be a good reason people make miniature violins! 😊

Japanese Articulated Dolls have been VERY popular for a long time.  I only have one - the ball joints are very cool.

Didn't want to interrupt your blog, but if you are still looking for a 'low cost' CF Viola bow, weigh your current bow to determine what weight you'll be using as a reference.

I don't know the weights of the bows, off hand, but think FM bows are the best, 'low cost' CF bows.  What I have learned - they are close in price, but (IME) have very different features.

Treat yourself - you are worth it! 😊

@ELCBK - Thanks for the bow info! Haven't fully decided on my course of action and am even leaving the nut and bridge resize on hold for a little while. But I will need to make a decision soon.

Only practiced an hour again and it was only the etudes, Ducks on the Mill Pond, Greensleeves, and Simple Gifts, and some Improv. Some of the Improv. was on Amazing Grace without the sheet music. Trying to translate what I'm thinking about, and hearing into what I want it to be. (If that makes any sense!)

@JohnG and others.  I am responding to your issue with nut and bridge (since you already have a diy badge).

The easiest method to reduce the nut height is by the use of single purpose guitar nut files or a miniature triangular file, working slowly and using something like a credit card as a height gauge.  Cecilio used to use real ebony on their nut.  If a dyed light wood was substituted, a dot of usmc leather dye will quickly remedy the repaired area.

If the adjusted notch covers over 1/2 of string diameter, it is best to reduce the nut height using a file or sand paper.  Easily done.

Did your viola come with an extra bridge?  If so (although this is not a show stopper), reshaping the bridge is not a big issue either.  The problem area is the potential of dropping the sound post (although Cecilio products are notorious for having heavily wedged posts).  I did a thread on using a length of bungee cord to place the top and bottom plates under compression while changing strings or working on a bridge.  Doing so would be good practice.  I use a belt sander to reduce the thickness of the bridge (let me know if you need advice on this).  Otherwise, bridge shaping tutorials on YouTube can guide you on correcting bridge problems.

If you want to get fancy, look up my thread on roasting a maple bridge on this forum.  A fun task.

Good luck if you are adventurous.

@Irv - Wow, what a great idea, but I fear I am not that adventurous! The tip on bungie cord compression is one I will keep in mind for that day that I will need to replace strings. I hadn't even considered that as a safety measure to prevent the sound post from dislodging.

What are the proper distances of the strings from the fingerboard, both at nut and at end closest to bridge, for a viola? Or is there a site where I get the information?

@JohnG et al.  The nut is a piece of cake.  If you go too far with the slot, a composite made of super glue mixed with baking soda can be used to fill the void.  Only a millimetre or two is required.  As previously suggested, the use of a plastic credit card or a paper business card should do the trick.

I will need to look up standard practice for the required space between the string and fingerboard.  If you go too low the c string will slap the fingerboard upon rigorous bowing.  A quarter inch is likely fine (a viola needs more than a violin).  A finely pointed wood pencil supported along the fingerboard is often used to mark the required curve on an upright bridge.  That should get you “cecilio” close.  Other methods require simple geometry.

Update on the nut and bridge. I took my viola to my local string shop and found out it would take 3 or 4 days to get the work done. Which is fine, since I realized I'd have to get in the queue, but it won't be right now. In two weeks (October 6th, to be exact), I'm getting all my remaining teeth (20 in all) extracted along with some jawbone protrusions removed. As a result, I won't be able to play for awhile anyway, so I'll take it in just before then. I really need to get this done as my teeth are in terrible shape (probably because of all the radiation I've received) and should surgery/beam radiation not be able to slow down my cancer, I'll need chemo and they can't give it if there are teeth to be worked on or if they are causing infections. So, out they will come!

Hope you weren't eating a meal while reading this! lol

Looking forward to seeing you get past some of this, feel better and smile!

BTDT- all my teeth at once... hate my dentures.  Before that, I had to have a boney ridge removed on one side of my jaw - all healed faster than I expected.

Glad you'll get your Viola back just in time to play it! 🤗

If your jaw still hurts by then, maybe just have fun playing 'hillbilly' style - from the chest, or 'cello' style!

@ELCBK - Thanks, not looking forward to the surgery, extractions, or 3-4 months sans teeth, nor to the dentures. However, looking forward to not having fairly common low grade tooth aches, or teeth breaking off, or ugly looking laugh. May have to try the 'hillbilly' style so I can play sooner!

Practice tonight was another hour and once again, was only the etudes, Ducks on the Mill Pond, Greensleeves, and Simple Gifts, and some Improv. including Amazing Grace without the sheet music. However with my penchant for wanting new stuff, I used MuseScore input and then transcribe "Wayfaring Stranger" from violin to viola and played that tonight!