The New Old Guy Re-Entering the String World
A personal view of the start of a journey into music and the viola.

When I'm tired I get sloppy and can hit other strings when I don't mean to.

When this happens, I take a minute to play a few strokes on each OPEN string.  I start at one end, work my way across all of them - then, back & forth on the strings that give me the worse problems.

Your hand & brain will sync back up.

Maybe do this to start off your practice for a few days & you'll be all set!

...I have 5 strings and MUCH less difference between each string.

@ELCBK - Some good tips, thanks! I'll try to keep them in mind.

Planned on a longer session today, perhaps one and half hours. However, quit after 50 minutes as my left hand developed a cramp. As my diet has suffered lately, it may be a low potassium problem which can cause cramping or it just may be poor form and position problem. Whatever, got through about half the repertoire. Essential Elements 119-124 Skill G Maj, D String Etudes, Blackest Crow, When Johnny Comes Marching Home, Amazing Grace, Ghost Riders, Wayfaring Stranger, Green Sleeves, Ducks On Mill Pond, Slan Le Maigh, Fiddlers Green, Ashokan Farewell, Bridge Over Troubled Waters, Sound of Silence, Scarborough Fair, and Blind Mary.

Only half an hour tonight, and wasn't even on going to do that, but decided I needed to play. Essential Elements G Maj Etude, Amazing Grace with improv, Sound of Silence, Simple Gifts, and lots of improv. I'm beginning to think the surgery and extractions have taken more out of me than I thought. But at least I have the viola to take my mind off things, a bit.

Sometimes the, "gotta do its" overtake the, "I really don't wanna do its". I went through that twice already this week. I didn't feel like it because I knew the pain I would be in for a bit after I finished, and really did not want to deal with it at those times; but I knew I needed to reinforce what I have been doing so I don't fall back.

Do you think having it all in writing in your blog helps the "gotta do its" win and keep you motivated? I find my blog does. I can read how I have improved, and I do remember where I was at each point, and I can mentally hear the progress as I read the posts. I am greatfulmfor for your starter blog. 😁

@mouse - Glad you're appreciating your blog, and for some of the same reasons I do. I definitely feel the blog helps keep me motivated to "gotta do it", that and the "Essential Elements Interactive" online practice log that I got with the Viola Book 1. I have to admit, one of the reasons to start the blog was to motivate me to keep up the practicing. A public record of shirking practice does NOT lead to a good self-esteem! lol

And now for something different! In the early days of this blog, I posted about having performed in a rendition of the Berlioz Requiem, and just recently I found that music! Complete with rehearsal notes! 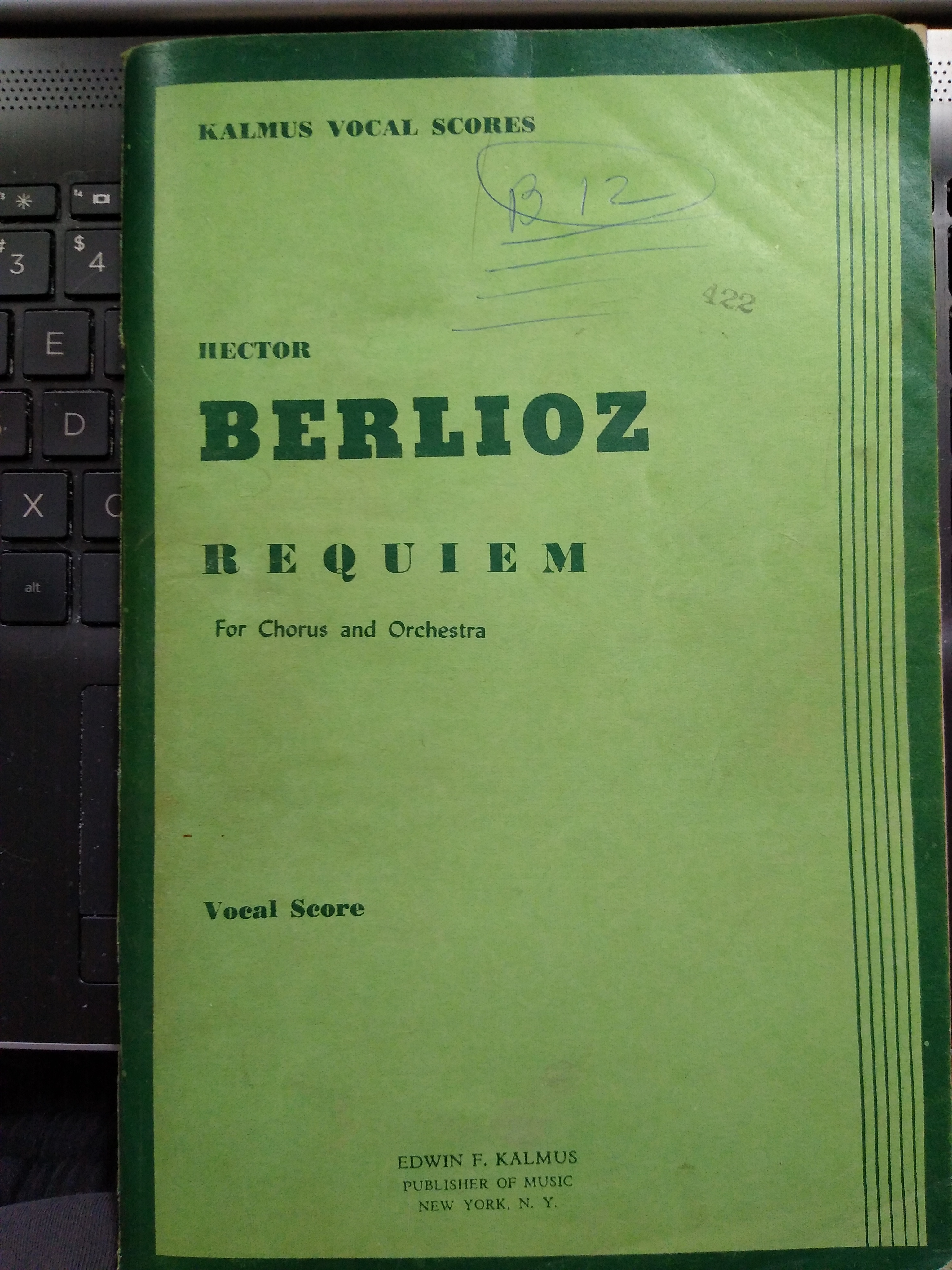 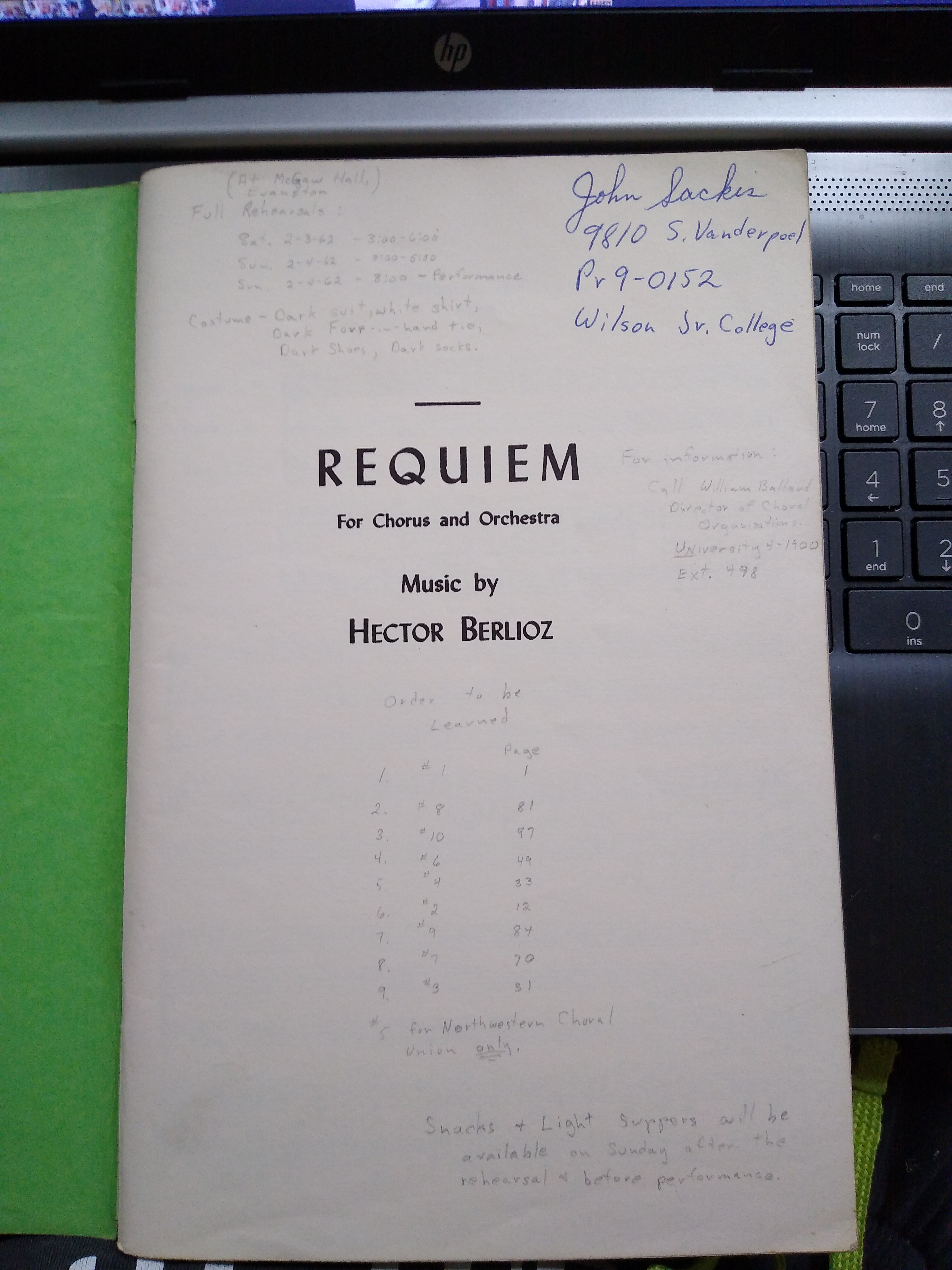 Umph! Three days off takes its toll. Played a half hour earlier, with new pieces Away in the Manager, Nearer My God to Thee, and a different version of Ode to Joy, and some improv. Followed up later with an hour of all the usual suspects and the three new ones. Muscles a little uncomfortable from the layoff and I think still recovering from oral surgery. Hopefully I can get back on track.

Have gone back to Hidersine rosin as it seems less scratchy and has better tone than the Sartory. It's probably me, but will play with this for awhile.

The rosin could be due to change of seasons or even temporary weather conditions, humid period, hot dry period. Many have a rosin for the humid season and the dry season. I have switched because it is humid here right now.

Only an hour tonight, but better than skipping yet another night! Full repertoire, but very quick. Sounded better than last session, but am still tiring easily. But I won't be thwarted in my goal to play Chicago's Orchestra Hall by the time I'm 110! lol

Current repertoire (which is too many, but "I gotta do it!"): Essential Elements 119-124 Skill G Maj, D String Etudes, Nearer My God to Thee, Away in the Manger, Ode to Joy, The Blackest Crow, When Johnny Comes Marching Home, Amazing Grace with some improv, Ghost Riders in the Sky ,Wayfaring Stranger, Come Saturday Morning, Green Sleeves, Ducks On the Mill Pond, Fiddlers Green, Ashokan Farewell, Bridge Over Troubled Waters, Sound of Silence, Simple Gifts, Improv.

Been a BAD student! Skipped two nights, only practiced about 20 minutes last Thursday, and 30 minutes on Saturday, both times just some improv and memory work. Been feeling a little "punk", and then two doctors appointments, getting ready for grandkids' visit, and then 4 days with 1-4 grandkids at the house. Hopefully I can get back on track this week!

Great thing is to do some playing for the Grandkids - best practice!

I'd never get to practice if I only did it when my Grandkids weren't here - we're always rotating them in & out. 🎃

Think the weather is responsible for some of the reason I haven't been feeling very good lately... and seems there's always something going wrong or breaking - have had more than enough this year. (lol)

I think sometimes if I dont practice for a a couple of days it actuàlly sounds better when I do, dont know if others feel the same way, but I dont think it does too much harm.

@ELCBKK - I still don't have enough confidence in my playing to actually play for them, so I only do a short improv/memory stint in another room with the door shut. btw- I saw you participated, at least as an audience, in Street Jelly when I watched @BillyG's last session there. What a cool place!

@stringy - Wish I could say the same about absence making me sound better!

After missing yet another day yesterday, got an hour in today playing all the current repertoire. It sounded and felt better than I'd anticipated! My left arm and shoulder definitely missed the practicing, though. They were a little sore. In addition to my usual travails, when we went to return the g'kids to their parents on Sunday, the engine started acting up with a pulsing sound and a hesitating/move action. Had to pull into a large parking lot and found it was the engine and not the transmission when I put it in park and raced the engine. Their mom had to come in to pick the the kids up. Yesterday I took the car into the local shop that I've been going to for over 7 years and they still haven't let me know what is wrong with it.

I was introduced to Street Jelly yesterday, and it really seems neat. I understand many here have been involved, including @BillyG, and @ELCBKK. It seems to be on a slight decline at the moment, but the concept is sound and could experience a comeback at any time.

Just ask the Kids if it's okay for you to practice (out amongst them 🎃).

Think you'll be pleasantly surprised - cause they love their Grandpa!

...realize that's kinda taking advantage, but think it's good for you and good they see you are learning just like they do.

You are playing great!

@ELCBK - You're probably right about the g'kids, they would probably suffer through it without complaint and it would be good for me. Oh, and thanks for the compliment.

I like supporting fiddlers that I know on Street Jelly, but I'm a LONG way away from playing live for anyone other than family and my friends that stop by. 🎃

Had to practice another half hour tonight. Concentrated on only a few tunes, Away in the Manger, Blackest Crow, Amazing Grace, Wayfaring Stranger, Greensleeves, Blind Mary, Ducks On the Mill Pond, Simple Gifts, and Improv.

Very enjoyable. Beginning to think Wayfaring Stranger may be the next for me to record and share. That, or Ducks on the Mill Pond.

Got an hour in this evening. Only about half the repertoire, but a little more time on each piece. Essential Elements 119-124 Skill G Major, D String Etudes, Nearer My God to Thee, Away in the Manger, Ode to Joy, Blackest Crow, When Johnny Comes Marching Home, Amazing Grace with improv, WayfaringS tranger, Come Saturday Morning, Blind Mary, Simple Gifts, and Improv.

Whatever was wrong with my car went away on its own. The shop tested it several times and finally someone came to my house today with the car and I concurred that it was running just fine. On the way back to the shop with an owner's son found that an intermittent left turn signal problem cropped back up. He told me he'd look at it when we got there. The left rear socket had a problem and the old bulb actually had a melted portion. He cleaned it up and put in a new bulb. My final bill was $0! Even after all the checking that they did and the repair to the turn signal. I love their shop and have been a customer of theirs for over 7 years.

JohnG said
Been a BAD student! Skipped two nights, only practiced about 20 minutes last Thursday, and 30 minutes on Saturday, both times just some improv and memory work. Been feeling a little "punk", and then two doctors appointments, getting ready for grandkids' visit, and then 4 days with 1-4 grandkids at the house. Hopefully I can get back on track this week!

You crack me up John. But good for you..... I've been bad as well. I can't remember the last time I practice and it really bothers me. I'm not saying that I never play, but I really need to practice.

Going on vacation next week...Cruising to Key West - YEEEEE HAAAAAA.

@Fiddlerman = Hope your vacation ROCKS! Say hi to all of Papa's haunts. Whenever I hear of Key West, I think of his "The Old Man and the Sea".

Only got half an hour in and then the Ghirardelli Dark Chocolate Brownies that I baked were calling me and I couldn't concentrate on playing. That mix is so easy (and so good!), especially when I substitute melted butter for the vegetable oil.

Played the shortened repertoire and feeling like it's almost time to record again (it's been two months!).

Chocolate brownies, you are a man after my own heart, the smell alone is incredible.