Sounds like you had a full house today. Did you play for them or when they were not there? I am more of a, "Play when no one is around" person. If I could play with me not being in the room, that would be perfect. LOL

Seriously, I really like your dedication and sharing it. I can see where it would be very helpful for you and keep you motivated. This is an interesting read.

@Mouse  - Yep, full house, yesterday. Played a few notes when I showed off the viola (most hadn't seen it), but no full fledged songs. I'm kinda with you on playing alone and only my wife has to "suffer" through it! lol This blog has really helped me stay with the practicing. It bothered me a lot when I skipped the two days and not being able to post my practice made me feel guilty (which is good!).

Yesterday turned out very interesting in that our son, who is a trombone player was checking out the bugles, trumpet, and cornet that we have acquired over the years. The bugles and trumpet came from my wife's family and the cornet I bought at a yard sale 20 years ago. One of the reasons I bought the cornet is that I thought it was "cool" looking in that it has both brass and copper finished parts!

Our son is planning on playing Taps on Monday for Memorial Day and last year he played it on his trombone. He ended up polishing up one of them with metal polish and other than where some plating has come off over the years, really looks sharp. Two of his sons took an interest for the first time and experienced some luck in playing some notes. He ended up borrowing both the bugle and the cornet. We'll see if that pans out over time.

As for today, I got an hour in playing Song from a Secret Garden, Sailor's Song, Ode to Joy, Amazing Grace, and Scales. Majority of the time was working on the Secret Garden phrases that I have difficulty with. The F natural on the D string gives me fits! In addition, C on the G to G on the D also is nuts!

That is cool, your son's the interest in the instruments. Is he going to play the one he shined up? That is so cool. You must be proud.

I made EVERYONE suffer when I started playing!  I'm an "Equal Opportunity" person... I share the good and the bad.  Someday, I'll play very well, not just by accident. (lol)  My Friends & Family will always be there when it counts the most - that's what's important to me.

Kevin & I have collected some cool and strange instruments over the years.  Many are in need of a little TLC, which won't happen until someone says "I want to play that, right now"!  Hoping that time comes soon with our Grandkids, cause I have my hands full as it is! (lol)

@Mouse - He's planning on using the shiny bugle on Memorial Day to play Taps. The cornet may be something his 3rd son may have an interest in. His eldest played trombone for a year and the 2nd played saxophone for a year, but both opted out after that. Our son played trombone and baritone for six years of school, but only plays them occasionally now. Our daughter played flute and piccolo for six years of school and also quit.

@ELCBK - We currently have one of our daughter's flutes that she was going to sell. And we have the guitar my dad planned on learning but never did. I have 2 alto recorders, 2 tin flutes, and an electronic keyboard! Oh, and his and her accordions stashed in the garage!!!

That is so neat you them for the kiddos and grandkiddos.

@Mouse - Yeah, we have used many of them as decorative objects in our living room, but would prefer that they be used!

An okay practice of an hour, but couldn't focus much so bounced around a bit including Song from a Secret Garden, Sailor's Song, Ode to Joy, Amazing Grace, Sound of Silence, This Old Man, Can Can, Scales, and more.

A little different today, went through a few of the beginning Fiddlerman lessons in addition to Song from a Secret Garden, Sailor's Song, Amazing Grace, Scales, and Improv. Actually ran over my normal hour session without even noticing. Tried out his left thumb position and it helps get my fingers in proper position, but ended up getting a cramp between the thumb and palm. Shook and massaged it out and then was fine.

doing well John G you cant go wrong with fiddlerman. I have had cramp in both hands today, fingers all locked in my bow hand, but I have been putting a lot of practice in and trying my best to relax, tension is the worst enemy as you probably know. My chin ups today havent helped either, slipped my disc twice in the space of 4 months and just got back to exercising my grip has got weak like a babys.

I always do my old guitar stretch of placing my hand flat on the top of my guitar and spreading my fingers as wide as they will go, dont know if you have tried that one.

@stringy - Good to know about the stretch you mentioned. This time I was able to massage and shaking did the trick, but will try your method in the future (though on a table, not a guitar! lol).

@Fiddlerman - I'm blaming you for trying a new piece! I was going through the beginner/intermediate videos and found your instruction for Raglan Road and though I am not able to double stop at this point, loved the tune. Found the sheet music in your repository, took it into MuseScore, converted to alto clef and transposed down a fifth. Now I can almost play it on the first run-through and will add it to my list. 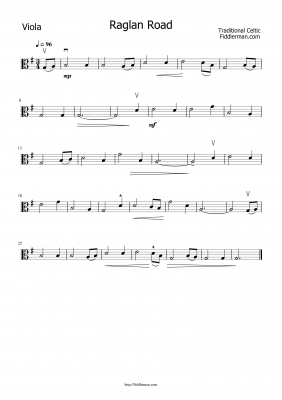 So, what is on the todo lost today?

Mouse said
So, what is on the todo lost today?

What are you improving? Do ypu just play with no actual music? I keep trying that and keep shifting fro, 3/4 to 4/4 to 3/4, etc. I have no steady rhythm.

@JohnG How did your son's bugle playing go?

Mouse said
What are you improving? Do ypu just play with no actual music? I keep trying that and keep shifting fro, 3/4 to 4/4 to 3/4, etc. I have no steady rhythm.

Some just playing random, made up tunes, sometimes trying to remember specific songs and try to play from memory. On random stuff, don't necessarily try to keep proper tempo, just what feels good! lol I keep trying to hear and replicate intervals to better have a better "feel" for the viola and tunes.

How did your son's bugle playing go?

It went well, he played the 3:00PM local time "Taps Across America" in his backyard. He shared the video with us and he really did a good job!

Another day, another hour (and a bit), playing Song from a Secret Garden, Sailor's Song, Ode to Joy, Amazing Grace, Sound of Silence, Raglan Road, Scales, Improv. Primary time on "Secret Garden". Probably a week or two on it before I record it, but it's getting there.

Something a little different. Peonies finally opened today, Chicago area, zone 6a. Peonies next door have been open for a week or more! Our wild roses have been open about a week. A fine day, indeed! 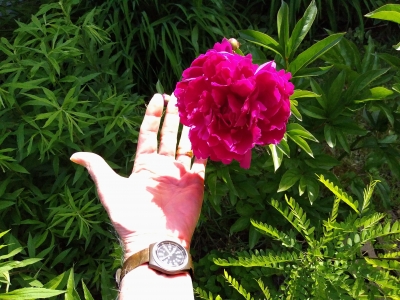 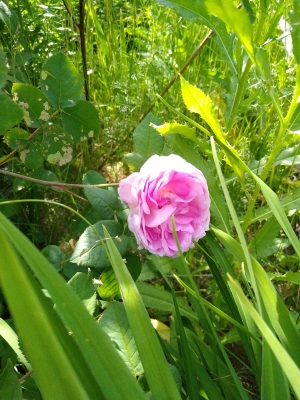 Very pretty. Your neighbor's my have opened a week ago, but yours should still be blooming a week after theirs. Always look for the bright side. 😀