Scottish Piper Tunes Played on The Fiddle
Mimic the Bagpipes!

Seems many Scottish tunes were originally known as 'Piper Tunes' - played on the Highland Bagpipes.

It's easier to learn how to mimic the style of 'Pipes' on the fiddle, when you understand a little about why Bagpipes are played the way they are.  Notes are limited, drones are limited and ornaments are limited.

Here's a link to the 'Jamie Laval' thread.  He's an outstanding fiddler who is an expert at playing Piper tunes!

Alasdair White is a Scottish, West Highland fiddler.  Here he plays 2 Piper Reels, 'Calder's Rant' and 'Prince of Wales'.  Sheet music for Prince of Wales can be found at thesession.org, but NOT Calder's Rant - I haven't checked the archives, yet.

Calder's Rant and Prince of Wales

Now I really like the 'Chanter's Tune (Song)', but the sheet music I've found doesn't get me to sound like a piper.

I did just find a video that kinda does!  Started this video by Fiddle Robert (Linn Barnes) at a point to cut to the chase, because the beginning is garbage about stringing a Cello like a Fiddle. 🙄

Do you play this?

...duh, I should've thought of using those trills.

Do you play this?

I do not.. nice one though... he likah dah reverb too!

Interesting story on one of the podcast about how in early days of violin, people would play with it positioned like that.  sorry cant quote which podcast/episode.  That history may be common knowledge, if not Im relying on interviewee to be correct..🤔  maybe someone can verify that.

Okay, Larry Sanger's got this down REALLY well!

This is SO COOL!

I never would have thought to change the tuning & play these tunes this way - LOVE IT!

Nora Crionna (jig) and Miss McCloud's (reel), learned from The Gravel Walks by Mickey Doherty, who, like his brother John, occasionally played in the scordatura tuning EAAA in imitation of the bagpipes.

I mentioned in the Traditional Irish Styles Fiddle Playing Thread - how much I love "O'Donnell's Return" from the Highland Sessions, but later found someone in the comments said it was actually called "The Haughs Of Cromdale".

Maybe close, but they are different tunes - and I found some help to learn them, too! 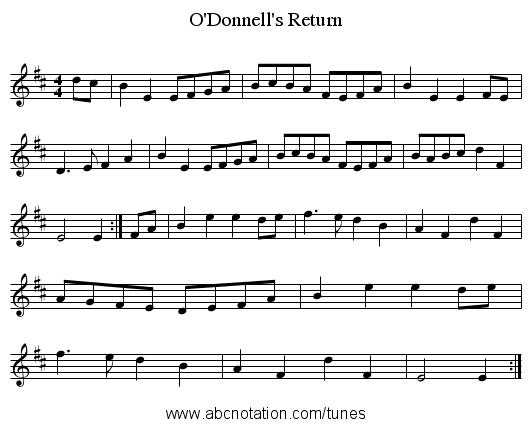 So, for "The Haughs of Cromdale", I actually found a fiddle TUTORIAL from Ronnie Gibson!

There's sheet music for this, available at thesession.org - maybe this one (#4).

As you can see, "O'Donnell's Return" and "The Haughs of Cromdale" are BOTH GREAT TUNES - WORTH LEARNING, but they are different.

I may be wrong, but think they may be played back-to-back in this video(?)