I've got a question about a lesson exercise I got. On the first measure, there's a short glide from a C natural to a C#. The C is on an up bow,  while the C# is on a down bow. My question is, exactly where do I change the bow direction?

Do I let the C nat. ring in full length alone, change the bow direction when I start to glide down to the C#?

Do I change the bow direction in the middle of the slide? Or do I glide from the C nat and change the direction of the bow when I get to the C#? 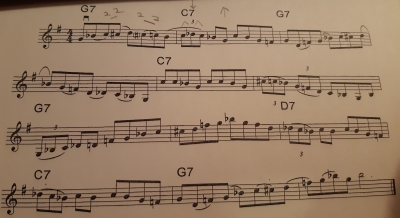 Always change bow direction in the indicated rhythm. The bow change would be on the new note.

In this exercise, are you sure it's glissando? The way I read the music on the page, there shouldn't really be an audible glissando. If it's written as glissando, your finger starts moving as soon as the first note begins, and lands on the next note in time. If the same finger is used on consecutive notes, and isn't marked glissando, the finger should slide quickly between the notes and the slide shouldn't take any musical time at all. (Portamento may be used if playing in a slur or otherwise connecting the notes.)

Both (the slurred and the unslurred) are, your teacher wants, 'position changes'*, not glissandos. Glissandos are marked either with the word gliss or a straight solid line. (sometimes a wiggly line?)

* you're in first all the time, so they are not real position changes.

AndrewH said
In this exercise, are you sure it's glissando?

In the audio example I got from my teacher I can hear a glissando. I'm unable to tell when he changes the bow direction though.

Well, according to the bow marking, I see a down bow on the G♯, which makes the  up bow that slurs the B♭ to the C♮, but your first glissando, from C♮ to C♯, should be bowed separate (down/up) because the slur does not occur on those notes.  Then a second gliss. goes from C♯ back down to C♮, should be up bow, as they're tied.

That's what I'm seeing, at least as written.

Those glissandos are hand written.  There are similar C♮ to C♯ notes (measures 3,5,6,11) and a D♭ to D♮ in measure 7, none of which have glissando written.  Is the only glissandos played are the ones written in on the first measure?  That seems odd to me.  I would think, for style, that the others would be played glissando as well, unless your teacher/conductor has you play it this way.

(I guess my question is similar to @AndrewH LOL)

@Pete_Violin All the slurred notes (which are only a half step apart) are played as audible glides. Except measure 2, 9 and 10, those slurs are played with a low 3rd finger and not the 2nd.

Please don't call them glissandos. If such a shift is played glissando, that is a matter of taste and/or accidental.

This video from 13:07 on is interesting.

HP said
@Pete_Violin All the slurred notes (which are only a half step apart) are played as audible glides. Except measure 2, 9 and 10, those slurs are played with a low 3rd finger and not the 2nd.

@HP Are you talking about what you hear on the audio recording?  I am leaning toward @Gordon Shumway's explanation here, that it is style or could be a problem in the player's habits, as the video he posted shows (the 2nd issue with not lifting the fingers correctly).

@Gordon Shumway, Andrew did it! LOL!  I'm kidding.  I agree, those are not truly glissandos.