Do you play the cello?

Do you play the cello?

We'll be happy to hook you up with a great violin when you are ready. 🙂

Hi all.  This is Irv.  I currently have 3 cellos, which are all in need of repair.  I have not played a note on any of them yet, although I did purchase Muller Rusch method book for the cello (the same series of books that I am using to play the violin).

The first cello is a Bellafina Musicale that had the sound post poke through the front plate.  All plywood construction (unfortunately) but it is very pretty.  I plan to take pictures of the repair (Fiddlerman, would it be possible to add a Cello repair/setup portion of this area or do I post the repair under the violin repair section?).

The second cello is a Bellafina that has a spruce top and plywood back and ribs.  The back has a crack in the sound post area (much easier repair than the poke through above).

The third cello is a Cecilio electric with a splintered peg box.  I have already glued the pieces and added a carbon fiber rod for additional support.  All I need to do now is add some car body compound, sand, and spray paint black to match existing.

MrYikes gave me a couple of sets of cello strings and I previously purchased a set of Hellicores.  I also have Knilling perfection pegs for them.  I hope to get to the repairs this week.

I could easily add a forum but it might barely be used. Why don't you add them right here on this thread and if it becomes more popular, I'll move it to a separate newly created topic. 🙂

I play cello. Still a student, but I play it. I started out when my husband and I walked into our local music store where I spotted a cello. Turns out a cello instructor came to town. The music store started leasing cellos with options to buy, or to outright buy; and he rented studio space to the violin/viola/cello instructor. He only keeps one in stock at a time because there is not a big demand around here. This was back in 2013. I leased one for three months and took lessons, Aug through Nov. nice sounding cello. Hit a brick wall. To keep post shorter, not explaining brick wall. Lease was up and I, sadly, gave the cello back.

Turned out to be a good thing. We moved to Vegas in 2014. Was there Sept-March or April, and back here in our house in the east USA for the Summer. We did this until March 2017, when we came back east to stay.

I still longed to play cello, violin and viola (even as a child, but no opportunity to do so). Back to the music store and asked them to let us know if they ever received a used cello as a trade. Turns out the owner’s wife (also certified to work on stringed instruments) wanted to sell hers so she could buy a different one. We bought hers. Took lessons from her.

A few months later, went to city 45 mins away for a free-motion quilting class and my husband went to a pawn shop we have fun looking through not far from where the class was. He texted me a picture of a cello and asked if I was interested. Bought it for $125. Our music store looked up the bow it came with because it looked, felt and bowed great, and we found it was worth more than what we paid for the cello, it was a good cello purchase. The cello is student, but did not need any work done it. Glue and everything else is in great shape. Sounds fabulous, geared pegs, and not a scratch on it.

A month later we went to a music store in that same city 45 mins away to get viola, violin and cello books. They don’t sell orchestral instruments, we found that out when we got there (first time there), but they do sell the books because a couple of the schools around there have school orchestras and there is an orchestra in the univerisity there. As we were leaving the owner said, “You play cello, right?” I told him I am just learning but would not say, “I play it.”

He said to my husband and I, “Follow me” I was thinking, “Do not show me a cello, I have two”.

Sure enough, in his back storage room was a cello. She was beautiful, but I have two. He said he would sell it for $75. It was taking up a lot of room in his storage room. I told him I had two and didn’t need a third. I was not trying to bring the price down. I was serious. They take up room in my house, too. He then said, “For $50 you can take it with you.” I figured I could sell a cello if I needed to for room. $50 was a good deal. It has a fantastic tail piece. It did not have tuning pegs, sound post, bow or strings. It did have its bridge and beautiful tailpiece in a bag. The body had no issues with glue, fingerboard, cracks, etc. It does have scratches under where the fine tuners are. Not sure how that happened. There are a few surface scratches in a couple other places, but all are just superficial. We took it. Our local music store fixed her up beautifully. The owner said he would have given them the $75 on the spot. I think someone traded it for a guitar because he does not sell orchestral strings. There were no others in that back storage room or on the floor, and he did not look happy to have to keep it. There is a yellowed label inside with the maker, place, model, ser# and year. I have not been able to find info on it, but am trying. Not sure where else to look.

So now I have three. Ada, my $50 non-orchestral music store purchase, is up and running and is my favorite. I have strings on order from Fiddlershop to tone her down. Wow, what projection she has! I ordered Pirastro Arecore or something like that. They are discontinued now but still available at stores. They are supposed to be mellow and were less than Obligatos. Worth a try. Can’t wait to get them.

Belle, the $125 pawn shop purchase is my next favorite.

Monte, the one I purchased from the wife of the store owner, and was the most expensive, is my least favorite, but I do love it.

That is my cello story, minus the violin and viola in the middle! Some of my family cannot figure out why I am doing this. I tell them that when we were growing up I had a desire to learn violin, viola and/or cello. With 9 kids in our family, and not an orchestral instrument area, those lessons were not going to happen, expense-wise and availability-wise.

At 64, my kids are grown and moved out, we are retired. I do not want to get beyond the age I am able to try it and then play the woulda, shoulda, coulda game. I am already doing the “Wish I had done it earlier” game and it is not a good feeling.
Well, I have to cut material for my two, what I am calling “Graffiti” quilts, I am going to make, one for each of my granddaughters. Later I can do my violin, did cello for a long time yesterday.

I don't play the cello but I wish that I did.
Cool story. Keep us updated on your Cello journey. 🙂
I think it's pretty cool to play all the bowed string family instruments.

You should give cello a try, Fiddlerman. You don’t want to play the “Woulda, coulda, shoulda” game, either.

These are some more of the instruments Mackenzie dabbles with,  most of the cellos are getting ready to be donated to the school, I need to cut a new bridge for the one.  She also has a ukulele.  We also have five Violas for the school also.  These give her a chance to try different things. 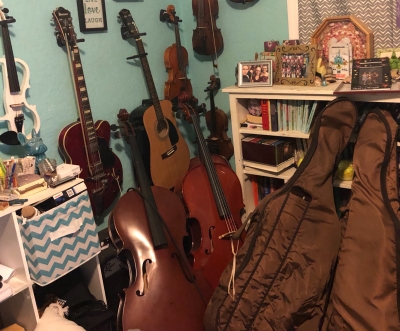