I have noticed that the sound post in my violin is not vertical. It is not off vertical by much but is noticeable (~1/8 inch). Will that matter much or is it within the tolerances of violins ?

In an ideal universe it should be perfectly vertical, supposedly we find a norm to define the "horizontal plane" first.

Once or twice a year it's not bad to visit a luthier to address such issues. However I would be concerned more if the soundpost is not touching the plates of the instrument properly and fully, rather than being perfectly vertical, in order to avoid damaging the instrument. If no luthier is available, I would extremely carefully dare to look with a dental mirror. But this could kick back, if you accidentally touch the post, and bring it down

Was it once straight and suddenly you noticed it was moved?

A photo would help. Two photos, would be better. One from the fingerboard to the tailpiece and one from the treble to the bass side of the instrument

Thanks Hermes,
@chrisram03 - Most likely if it is not vertical the feet are not matching perfectly on the top and bottom and that makes a tremendous difference in sound. Definitely go to a luthier to have it adjusted unless you would like to attempt to do that yourself. We have a video on how to raise fallen sound posts in case you mess up.

A great tool to use if you don't have a sound post adjuster is a fork. Tap one side in the direction it needs to go with strong but short decisive strokes. Observe the amount of movement between all your strokes.

Thanks for the advice guys!

Mostly I am asking out of curiosity. I'm not sure if the sound post was perfectly straight before but it is at a silght angle relative to the bridge and the bridge is at a right angle relative to the top plate. As far as I can tell the violin sounds fine and I can tune it without problems.  I'll see if I can get some pictures of the sound post.  Also it is good to know that visiting a luthier is an option as I am new to this world things concerning violins. My guess is that there is no problem with it. I think it would be fun to get an inexpensive violin and play with sound post adjusting before I try anything on this instrument.  Thanks again Hermes and Fiddlerman!

Pierre, this thing with the fork, is a real lifehack...

I've never thought of it before...I own some soundpost setters but now that I'm stuck with this fork thing I guess that you can also bend it into the proper shape

Chrisramo3, getting a cheaper instrument to experiment on is always great, and will definitely help you understand the instrument...Now as far as you post is concerned, you know, having your instrument checked every once in a while by somebody you trust, is like fine-tuning your car...(and making sure it's safe). I would have it checked just to relax if I was really occupied with the thought, and make sure that my instrument is at it's full potential...

here is a recently posted video on sound post setting

Here are a couple of pictured of the sound post. Probably not a big deal but wanted to know what y'all think. 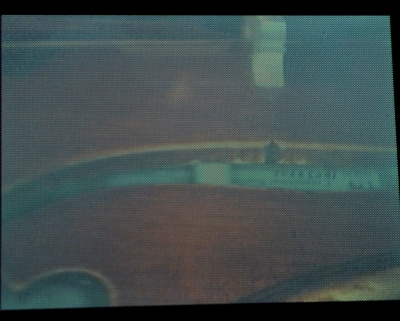 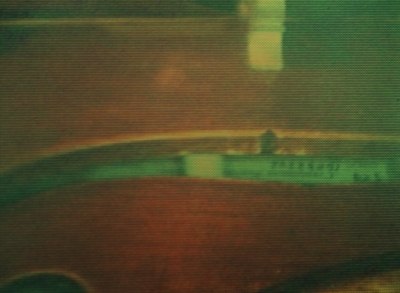 I see what you mean by not straight. As an experiment I would move the bridge back so that it is not perfectly aligned with the notches on the f holes; move it back just far enough so that the bottom right foot is covering a bit of the sound post surface area.

Then test to see if you like the sound.

my logic behind this is perhaps the shape of the sound post is in fact making full contact with the top and back of the fiddle albeit slanted. By adjusting the bridge you can improve the violin.

or you'll completely knock down the sound post, but if your taking it to a luthier/violin repair man a fallen sound post is already an inevitable incident.

Questions : has it always been like that? is it a nice violin?

idealistic rhetoric : is it possible that a proper slanted sound post is a luthieric form on innovation?

My Audio Clips on Fiddlerman.com (Please navigate to most recent page)

My Video Clips on Fiddlerman.com (Be Sure to navigate to most recent pages)

Chrisramo3 Thank you for your pic update.

It seems as if there is indeed a small tilt, if the tailpiece side of your bridge is perpendicular to the top plate as you mentioned.

Is it straight the other way round? (sight down the violin from the fingerboard to the tailpiece and look through the treble f hole). If so, where is it relatively to the foot of the bridge? is it aligned with it?

It may sound ok, but I am sure it will sound better if placed vertically. However since the angle is small, maybe it would be better to leave the operation to a luthier if possible. If you haven't done this before, mind that it could take longer time to do it than the luthier and Fiddlerman do in the video, and even longer to place it straight

I am not even discouraging you, it's just something to consider : maybe going diy would be longer than the trip to the luthier if it's the first time. Of course you can practice on a spare instrument as you said before.

@Jacques I am no luthier but if it's an innovation, I suppose its a time consuming one...imagine that one should calculate angles in multiple directions to ensure a proper fit...

Also moving the bridge could give us an idea as you proposed. I would have some little doubt however of whether it would properly depict the final outcome with the post perfectly straight, since on the one hand the bridge - post relationship would be better but on the other hand the bridge would be placed in a different position relatively to the top and the bass bar, plus the everlasting debate of different vibrating length and afterlength that we'll get...

Truthfully you need to show more of the top plate for us to really see if it's tilted. I know many of you think it looks crooked but one easily gets fooled by the various angels and curves.

From what I am seeing it is very possible that the top of the sound-post should be moved towards the bridge, or the bottom away from the bridge.

@Fiddlerman , @Hermes, and @Jacques - Thanks again for all the great advice. I have tried to take some better pictures and made a comparison with my other violin. Since the difference is so slight I think I will take it to a local luthier and ask the same question. It is probably just in need of a slight adjustment if it needs one at all. I think will order a violin kit and work on putting one together ( if I do I'll post that in the forum) but I believe I will leave this issue to the pros. 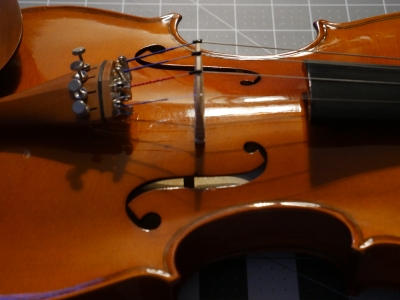 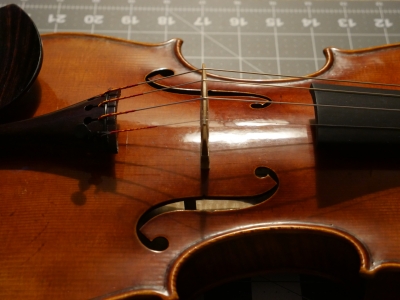 These pictures are obviously better but not what I need to see.
What I would need to see is first that the bridge is perpendicular to the top plate. The top plate in relation to the top of the ribs. So a picture from the side facing the ribs. If the bridge is 100% straight (for use as a guideline only) you can then take the angled picture looking into the violin with the sound-post in sight such as what you did.
For now, the sound-post appears to be angled very slightly with the top further back than the bottom in relation to the bridge.

Here are some additional pics. I hope this is the angle you were looking for. 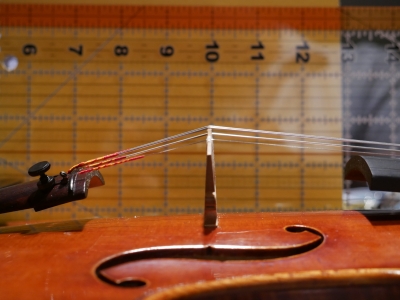 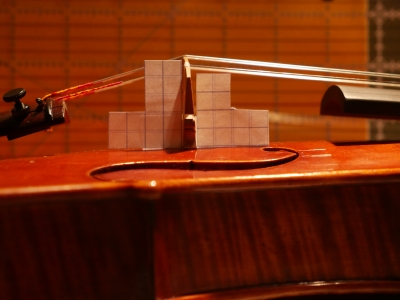 Not quite though it might work for you. I look at the top plate from the top edge of the ribs and make sure that the bridge is perfectly straight for use as a guide.

Then I turn it so that I can see the bridge and sound post from an angle looking down. I want them to be on the same angle.

Using your picture this is what I would look at.
Then the sound-post after setting the bridge straight. 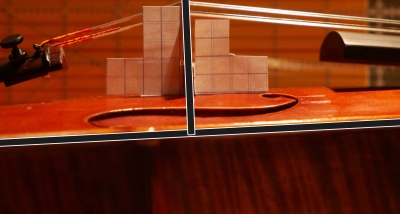 @Fiddlerman - Thanks for pointing out the bridge position relative to the edge of the violin.  I looked at the bridge very closely and it looks like it was tilted forward by a tiny bit. I straightened out the bridge so the back of the bridge was at right angles to the edge of the violin (corresponding to the horizontal line you drew) and the deep resonances came back immediately.  The violin body was barely resonating before and it sounded ok but not great. Now when I bow across the strings I get the powerful resonances over the top and bottom plate. They sound deep and haunting (maybe poignant is a better word).

Music to my ears.