Thanks, Pierre, for giving the Traveler a nice overhaul! Sorry to hear that you couldn't get media coverage. Maybe BillyG will have better luck. Looking forward to seeing her journey through the rest of the world!

That's great !   Got the tracking number.   Most times I've had an order from the States via USPS there has been a 3 to 5 day delay before it actually leaves the country. I'll be keeping an eye on its progress.

As it happens, we're in the middle of moving home - but - our new premises require a bit of renovation, so we'll be moving back and fro between them for the next couple of months.  This has put a bit of a "damper" on some of the plans I had and places I would take her to - BUT - I have other ideas as well (which I won't divulge at the moment - both to keep it as a surprise, and also not to let you all down if the plans don't come to fruition!) - whatever happens - it will be all good at the end of the day.

Does that just mean it's processing through the department, or they are actually holding onto it (because they think it's so cool and want a better look at it and all the goodies haha).

Probably means they're scratching their heads and wondering whether to let it through or not.

Let's hope Bill sorts them out.

I've just got up to speed on what's been happening with the Traveler; pretty exciting she's going across the pond now!

It's pretty amazing all the places she's been! Wow!  This is as good as it gets!  I'm so glad I got a chance to be part of this and I can't believe its going to be 4 years since she was here, come spring! (how can that be?? )

It was really nice to see how she faired in Kananaskis country @intrepidgirl!  It's been awhile since I've been to the Rockies, so beautiful!  Also nice that Pierre got some time as well, and to show us what she sounds like, when he plays!

The parcel has been marked with a visible label stating - "FAO HMRC: Item on loan for Temporary Admission to UK" - but that is clearly not sufficient for them.....

For our UK readers (and EU) - the package is now in the hands of ParcelForce and has a new, local tracking number.   They have temporarily passed it to HMRC authorities.

So......  The Traveler is currently being held hostage in a large grey building, surrounded by high electrified fences patrolled by armed security guards, somewhere outside Coventry (really, I'm not joking - neither about the building, nor Coventry).

Strangely enough, there is a saying, possibly unique to the UK about someone being "sent to Coventry" - so for the benefit of others - to explain - To send someone to Coventry is an English idiom meaning to deliberately ostracize someone. Typically, this is done by not talking to them, avoiding someone's company, and generally pretending that they no longer exist.

How DARE they do that to The Traveler.....

I'm on the case and am putting a plan into action to free our hostage.   It involves setting up a "Special Extraction Force", the use of camouflage jackets, heavy armour, several bulldozers and a squad of angry Scotsmen wearing kilts.... 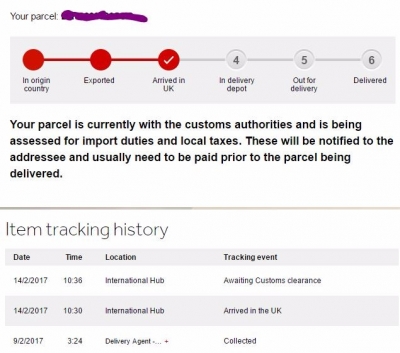 Poor little Traveler. She didn't do anything to deserve being locked up. We can do what internet folks do best... start a hashtag campaign, lol. #FreeTheTravelingFiddle

Seriously, hope she gets out soon and into your hands!

damfino said
Poor little Traveler. She didn't do anything to deserve being locked up. We can do what internet folks do best... start a hashtag campaign, lol. #FreeTheTravelingFiddle

Got a message from The Traveler, smuggled out of the UK HMRC Detention Centre by a kindly guard -

Everything is good here, and I'm being kept in a temperature and humidity controlled environment.   The only down-side to things were the X-Rays, the MRI scans and internal cavity searches, but finally I found a new friend here.  I was suddenly surprised to find myself being nuzzled by a soft wet nose - and it was Sgt Barker. The person with him is Lt. Jones, who was muttering "Find the Coke, find the Coke" - obviously not having noticed the soft-drinks vending machine in the corner.

Still don't know when I'll be released though, I think they are going to send a letter by snail-mail to BillyG to pay for my release. 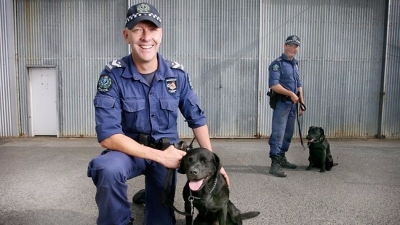 Can't wait until the Hostage situation is over.

Waiting eagerly for her to be safe and sound.

It's a shame these things take such a long time but honestly, it's normal. We've had to deal with these kind of delays countless times even when duty charges are being paid promptly.

I have been laughing so much at the posts on this thread that I almost went out and got a twitter account.

Woo-hoo - I'm free at last ! I've left the HMRC Detention Centre and am now on my way to the ParcelForce central sorting hub. There is a suggestion that there may be customs-charges applied, why that should be I have no idea but I'm sure BillyG will sort it out - it's the principle of the thing, not the actual payment that irritates him !

I've called ParcelForce (because they won't have an email address for me it would normally be done by post - the customs charges payment I mean ) and it'll be in their depot first thing Monday - so I can call then and pay over the 'phone.   She should be dispatched later that day, or Tuesday at the latest !!!!! 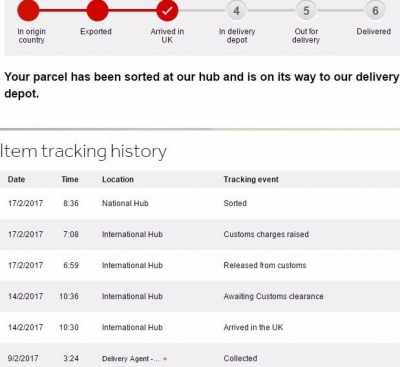 Woo hoo - not only ransom-paid - she's HERE !!! Yippeee  Told her we're having haggis, neeps and tatties for dinner - she looks at me like I'm daft or something... LOL   I'll gently train her into the ways of the Scots.....   Don't worry friends - she will be fine, but may leave me with a different accent....  It'll be even worse when @Worldfiddler (Mr. Jim to you all) gets his evil hands on her...

No images to post as yet, and no vid - but I did manage to take a single photo before the camera battery went into the red-zone - like - recharge me NOW Bill

Anyway - it was just a photo of the customs label, because I am going to challenge them on the "import duty" until they decide it is easier to give me my money-back than continue with daily haranguing on the 'phone as to why I should have to pay ANYTHING for something that is "on loan" for temporary admission to the UK - something I have not purchased and will never own, and indeed, will eventually leave our country.....   I've tried - "but what is the payment FOR, where does it GO? Who benefits from it?  (my $20)"    LOL - it is a point of principle, nothing else.... They cannot give a sensible answer....

But - that's down to our "European" overlords....  Scotland is Scotland, and a part of the great UK, just as England, Wales and Northern Ireland are.  I will NEVER submit to the stupidity of the "EU regulations", NEVER... LOLOL   OK - I apologize for the (very slightly) 'semi-political post' - I know I shouldn't do it - and didn't intend it - my words may just "comes across as 'political' " to other UK-wide members who know what this stupidity is all about and can "read between the lines"   We of course all have different and personal views on the current Brexit situation, and, that is absolutely fine...  But I had to say it....  It is NOT RIGHT - I'll happily pay shipping charges to-and -from ANY part of the world - but why should I pay even a penny for something that's on loan, will be shipped-out of the UK, and that I'll never own.... stupid, stupid, stupid ^£%£%£% - expletives deleted.... LOL

I think every single person who becomes a host to The Traveler should go back to the first few pages of this thread and read EXACTLY how this has all come about. One or two free-booting recipients clearly have not....  which is such a shame when on her travels, she gets no, or sometimes no-meaningful-posts on that part of her journey....Stop and think about it - she's been travelling for close on 4 full years since 2012 - IF WE MAKE THIS WORK - she'll still be on her intercontinental travels - LONG, LONG AFTER WE HAVE ALL PUT OUR BOWS DOWN ( you know what I mean )

There are HUGE "thank yous" due to @VinceKnight @scotty @Fiddlestix @Fiddlerman for all of the early setting up WAY BACK IN 2012 - go back, read the early posts - it is easy to uncover - apart from Pierre who is active almost daily  - check out when these guys last posted...  THEY SET THIS AWESOME IDEA and JOURNEY UP - let us ALL thank them !

These guys donated the instrument, the idea and much more besides- THEY SET THIS UP - let us ALL thank them !  And a personal BIG THANK YOU from me, right here, right now - WELL DONE GUYS - FREAKING AWESOME -

There'll be a LOT more to come...  ( hahaha - I just HAVE to match-up with Geroganne @Georganne efforts - the ( her own words ) "traveler video whore" hahahahaha !

P.S.  I'm so used to the Kaplan E - the Amo strings E-string as fitted by @Fiddlerman occasionally ( only occasionally ! ) whistles at me - but I'm better than I was in the early days and I can control it...  LOL - I know what's going on !  LOL

Great news that the Traveller is free!

Looking forward to the vids and pics when they are ready to post.

I've never got to travel there, probably never will no matter how much I'd love to explore over on that side of the pond taking pictures of everything, but at least my signature on a fiddle made it there, haha!

Glad to know the Traveler is safe and sound with you @BillyG! You've waited so long to finally get it. Enjoy!!!

There'll be a LOT more to come...  ( hahaha - I just HAVE to match-up with Geroganne @Georganne efforts - the ( her own words ) "traveler video whore" hahahahaha !

Lol and even so, I fell down on the job.  The combination of record breaking wet summer and newly acquired soul mate, made me post much less then I had planned.  So have a grand time my friend.