Posted on December 9, 2011 by Fiddlerman

Players from around the world ranging from beginners of two weeks to players that have been playing for most of their lives, combine to make a Youtube video.

For two months we have been working on 4 parts ranging from easy to intermediate, and discussing how to play them on the forum. Quite a few brave players have posted their progress to be reviewed and constructively criticized by members making the project a great learning experience for many as well.

The audio of this video is a collaboration of 19 players with a total of 24 tracks, since a few players recorded two parts. 12 players included video and 7 players sent exclusively audio files to be anonymous.

How did I make the video?
First I imported all the videos from a free file sending site called sprend since many files were over 100 Megs, and saved them to my harddisk
Next I opened them with a free video converter program called MPEG Streamclip to export the audio.
I then imported the audio to a multi track recording program called Digital Performer and worked intensely to time the beginning of each and every track as well as possible. 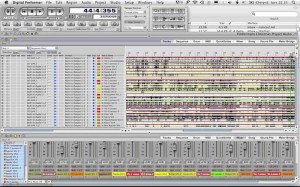 Lastly I imported the videos and sound to iMovie to make the video. Originally I wanted to combine 2 – 4 – 8 videos in a screen but found that iMovie was too slow for working on that many videos at once so I settled with one video at a time.

You too can participate in the next project. Join the forum and stay informed of what is going on at Fiddlerman.com