Music before age 9 protects brain after 60 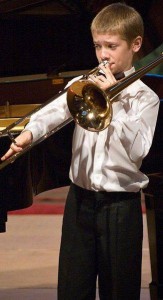 Music before age 9 protects brain after 60

Even former musicians may benefit from the cognitive boost. “In other words, you don’t use it or lose it. Nonetheless, the study highlighted the critical importance of the timing of musical activity, which may optimize cognitive benefits,” says Hanna-Pladdy.

EMORY (US) — Learning to play a musical instrument before age nine and practicing for a decade at some point in life may keep cognitive decline at a bay later on.

A recent study conducted by Brenda Hanna-Pladdy, a clinical neuropsychologist in Emory University School of Medicine’s Department of Neurology, offers additional evidence that musical instrumental training, when compared to other activities, may reduce the effects of memory decline and cognitive aging.

This is the second study published by Hanna-Pladdy, which confirms and refines findings from an original study published in Neuropsychology in 2011 that revealed that musicians with at least 10 years of instrumental musical training remained cognitively sharp in advanced age. The findings were published in the July issue of Frontiers in Human Neuroscience.

“The study confirms that musical activity preserves cognition as we age, by comparing variability in cognitive outcomes of older adults active in musical instrumental and other leisure activities,” says Hanna-Pladdy.

“A range of cognitive benefits, including memory, was sustained for musicians between the ages of 60-80 if they played for at least 10 years throughout their life, confirming that maintenance of advantages is not reliant on continued activity.

“In other words, you don’t use it or lose it. Nonetheless, the study highlighted the critical importance of the timing of musical activity, which may optimize cognitive benefits.”

The cognitive enhancements in older musicians included a range of verbal and nonverbal functions, as well as memory, which is the hallmark of Alzheimer’s pathology.

The study evaluated the timing of musical engagement to determine whether there is a critical period of musical training for optimal cognitive advantages in advanced age. While years of playing music were the best indication of enhanced cognition in advanced age, the results revealed different sensitive periods for cognitive development across the lifespan.

Early age of acquisition, before age nine, predicted verbal working memory functions such as remembering and reorganizing digits in your head, consistent with early sensitive periods in brain development. Sustained musical activity in advanced age predicted other non-verbal abilities involving visuospatial judgment, suggesting it is never too late to be musically active.

“This is an exciting finding in light of recent evidence suggesting that high educational levels are likely to yield cognitive reserve that may potentially delay the onset of Alzheimer’s symptoms or cognitive decline,” says Hanna-Pladdy.

“This also highlights the promising role of musical activity as a form of cognitive enrichment across the lifespan, and it raises the question of whether musical training should eventually be considered an alternative form of educational training.”

According to Hanna-Pladdy, to obtain optimal results, individuals should start musical training before age nine, play at least 10 years or more, and if possible, keep playing for as long as possible over the age of 60.

via Futurity.org – Music before age 9 protects brain after 60.