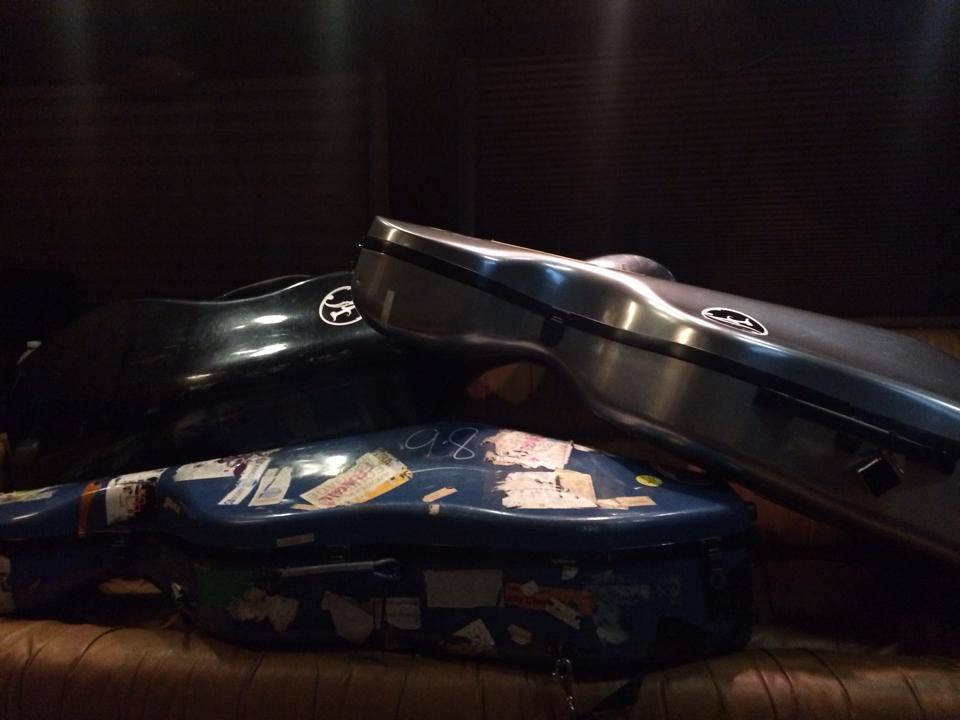 I love this beautiful photo.  To me it sings of beauty and emotion, not only the visual aspect of the photo, which in itself is dark and mysterious, gleaming with reflected light, but you can almost smell the earthiness of the old, faded, stamped case, and hear the shadows dancing…. (If, indeed, one could attune the ear to the dance of a shadow)…..a warm contrast to the cold, shiny metallic cases. If you could run your hand over any one of these, how would you feel?  What vibe what you pick up from touching it? Could you pick up on the essence of the owner?  Could a person, by touch, by remote viewing, connect through time and space, to learn some innermost working of the owner?  Yes, I believe this is possible, as I have experienced it myself in the past.

Now, turn your attention to what is hidden inside…. listen, if you can, to the potential of perfection, the sound of the oceans roaring through the ages, dividing the continents.  In what forests, in what country, what types of trees, began their lives as a tiny seed, to grow, their branches reaching to the heavens, to span how many decades,  to provide the wood that eventually called out to some luthier somewhere?  Crafted in the 1700’s, existing in four different centuries – yes, imagine, four centuries-  three glorious cellos, subdued and encased in their world travelled shells  By themselves,  silent.  When played by their owners, past and present, how they speak a language of their own, and it does not matter what language the listener speaks, as the language of music is universal.  I recently had the privilege of being up close and personal with Apocalyptica in concert.  As someone who has taken up the fiddle in recent years, hearing, feeling the heartbeat of the cello,  I am flooded.  I am amazed, I have been humbled, broken down into the smallest particle of the universe, and yet my heart still beats. That sound. It’s big.  It’s something.  It’s very important.  The Suomi soul wrenched from these bows and strings makes me want to weep with and for something that is so pure, it may be divine.
But wait, perhaps it is more than that, or simply less than that. I look up to people like this, not  because of fame, but because of their talent, creativity, knowledge, dedication & hard work.  And somehow what they must feel in their heart to pursue this music is a force that draws me in.  And I also have always been attracted to things aesthetically pleasing to my portrait-artist eye. Such as the photo here.  & perhaps the photographer, ah, ever the flirt, he makes me smile. He has those qualities.  But why would this mean anything to me? Or does it? Perhaps I only feel an affinity for Laplanders due to reading such books as “Dust Ship Glory” (non-fiction, by Richard Scriver, Saskatchewan writer, see: Sukanen Dust Ship) or “Firefox Down”, by Craig Thomas, (movie by the same name, featuring Clint Eastwood.)  Or perhaps, like my own country, their land of the Midnight Sun calls out to me.  Perhaps their language, and their names, are just kinda cool.  Perhaps, like the firefox, I just want to sink under a dark Finnish lake; cloaking myself with the sound of Paavo’s cello going on forever.  Yes, I am in love.  In love with the cello. Or maybe I just like the metal coming from the Land of the Thousand Lakes.
Later that night,after the show, I had a recurring nightmare, which I recognize as my subconscious telling me important stories.
“Everything is more beautiful because we are doomed!”
by Cindy
This entry was posted in Member Articles. Bookmark the permalink.