Many, Many Many Solid Body, Silent Cello (or violin, or viola) Questions

I have, yet another, question. This question concerns silent instruments. I am using the “Breakroom” because, although I am more interested in cello, this applies to violin and viola, too. (Could we have a general string instrument accessories/instrument section? Many accessories and forms of instruments crossover.) What I would like to ask about is the Silent Cello, or violin and viola. I am only going to say, cellobecause that is what I am specifically interested in.

I am playing my cello a lot. It is loud, no way around that. I would like to play it without being concerned that my husband is sitting over there gritting his teeth!  He does not say anything, but it does hold me back for repeating over and over. Also, it is Summer. My front door is open. Sure the storm window is up because of the A/C, but on cool days or evenings it is down and the slider in the dining area is open. I really do not want to cause friction with the neighbors. We live in the country but when my brother-in-law built the house next door, he built it on this side of his lot because it is higher. He has moved a mile down the road, and a non-family family lives there. They are gone a lot, but they do have a pool and use it when they are home, and I do not think they want to hear me struggling with my cello day in and day out. If it was still my brother-in-law living here, I would not be concerned. 😂

I would also like to take my cello outside out front under the big shade tree and play it when it is not super hot or humid. I could take my chair out, a piece of wood for the end pin, put my strapped endpin stop under my chair leg like I do n the house and then my endpin stop would stay in place, and not sink into the ground. I can’t do it with an acoustic cello. So, they are my concerns I have to work around.

Irv mentioned silent cellos in one of my other question threads. Sounds interesting. Then I watched a Fiddlerman video on a solid body silent violin. I now understand the difference between an electric and a solid body silent instrument. Now for my questions about my concerns.

How can you hone your intonation? Is the intonation clear when you do not have it connected to an amp? I would not be connecting up outside, and not sure how often I would want to use headsets when in the house, either.

Does it hinder intonation progress when plugged in with headset use?

I have a really good set of headsets. When we bought a Roland digital piano the delivery was messed up. Didn’t bother us any, but the store owner brought the headset and gave it to me to make up for it. Would I be able to use those, or are there specific headsets for each brand of silent cello?

Would the switching back and forth between the two be an issue? I can switch between my acoustic cellos.

Would my headset work?

Can you hear the intonation clearly when not plugged in?

Oh, what about the bowing? Do you notice a difference that when switching that would be an adjustment each time, too? Don’t need that, either.

If you have a solid body silent cello, could you make a video of it not plugged in, with a regular mic or cell phone about 8 feet away? I would like to hear what my husband would be hearing in normal sound. Then do it unplugged with the mic closer to where you would be hearing it, without it going through the headset, unplugged. Thanks.

Not sure if you could do a headset sound demo.

Also, in Fiddlerman’s video, I did not notice much of a cello sound. Can someone do a video of how it would sound just as a normal cello and what is done to achieve that? Can a simple amp allow that? I am not interested in pedals and stuff to have any special affects.

Can any amp work? I think we have a little Peavey that was used with an electric guitar and electric bass (my kids, not me). I am not getting a set of speakers.

Phew! I think that is it. Thanks a bunch people.

Have you tried this:
https://fiddlershop.com/produc.....ctice-mute
It's not a super silent mute but very pleasant sound. Probably worth a try.

I actually have that but it seems to affect the sound too much when I am really having a bad day with intonation. Kind of a muffled sound that prevents me from relating to the proper sound. I can’t tell if my intonation is correct. I love it when I am just trying to get bowing right and not being too picky about intonation. I know, you should always be picky about the intonation, but it is hard to do both at one time. I love it for bowing issue corrections, or getting the bowing right for a song. It is always in my bag of accessories by my chair ready to be pulled out.

Silent instruments take the generic modern headphone jack (likely metric, but about 1/8 inch diameter).  The over the ear type of headphone bangs on the bass side pegs, so I do not recommend them.  A gamers type headphone for a single ear would be ideal.

You will not experience any intonation issues IF you keep the length of the string between the nut and the bridge exactly the same.  An electric or acoustic instrument, it makes no difference.   Not involving intonation but related to general sanity, also keep the bridge radius somewhat the same between instruments.

I have profound hearing loss and do not use headphones on my silent cello.  It is likely do to having the strings right next to my ears.

I would start any amp on a low setting when turning it on with a cello attached, and slowly turn up knob a little at a time.

Take an old fashion spring type wooden clothes pin and secure to side of cello bridge, play a little, then whittle off ends of pin until you have adjusted sound level to taste.

I am of no help to you regarding video.

Thanks, @Irv No problem with the video. I ran across a video and at the end the person did it without plugging it in. Just stumbled upon it.

I think I will pass. Seems like you don’t get them pretty much set up if you have to do all those measurements and adjusting. I have no idea what the clothespin was about. So, I will just go on as I have. When I get really good, I will charge the neighbors for concerts! LOL Or, if I am really bad, maybe they will pay me not to play. That is the ticket.

Now, do not get me wrong, they have not said anything, no complaints. I just don’t want to annoy them.

I was actually not impressed with the sound of the one I heard this afternoon, plugged in or not. It just did not have a good sound. It was tinny. He had those awful Larsen A and D strings that I find sharp and raspy, with the Spirocore C and G. Could be the problem. This was a low end cello, too, which is what I would have done. Kind of thought that would be the case because I am not spending a lot of bucks on one. I don’t think the nice fullness of an acoustic cello would be achieved with it and I am really picky about that. It was fun doing the investigating and checking it out. They do fill a big need, though.

Thanks for all of the information. Will remember that in case an older brother of mine, with closer neighbors, might want to do it. I doubt he ever will, but just in case. He likes to hear it, and has asked questions, but I think that is as far as it will go.

@Mouse .  Sorry if I went high tech on you.  Perhaps photo will explain better. 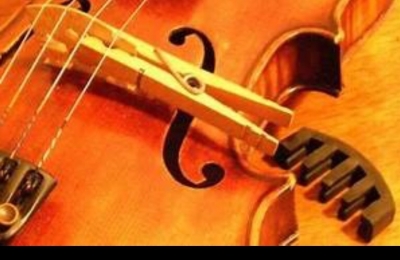