Hello. I`ve found my bow crooked. It was straight when I bought it. But now... something wrong has happened.

Look at the photo (between A and B).

Should I buy a new one? How to choose a good bow? 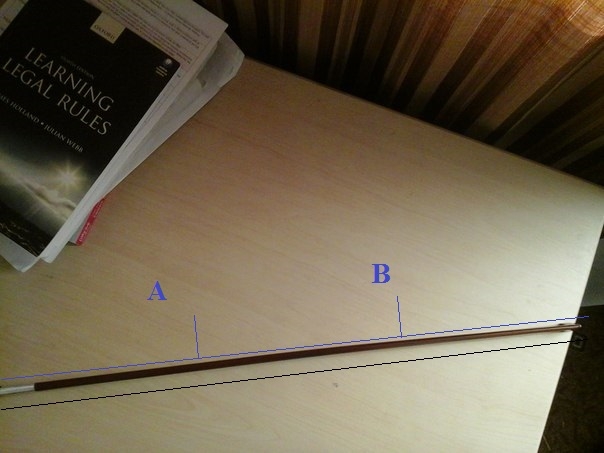 It's called, "camber" and is supposed to be bent.

The thing is that if you twist the bow just slightly to the left it will appear straighter. I believe you when you say it's crooked, but a 100% perfect bow hardly exists and even at that, they will not stay that way forever. I've had my expensive bows reshaped quite a few times. The luthiers do it using heat..... One of our members straightened his bow using a hot air gun but I don't recommend this unless you are willing to risk breaking the bow.
Lastly, it's not that big of a deal if your bow is a little bent, especially in the direction that yours seems to be warped in. I actually like it when a bow arches slightly to the left. It gives a bit more action.

Ahhhhhhhh.. now I see the whole picture, I had to enlarge it to see the blue reference line's. I thought the top blue line was the bow hair, lol.
It is I who straightened/s my bow's with a heat gun, I don't have a alcohol burner, but I take my time.

Ahhhhhhhh.. now I see the whole picture, I had to enlarge it to see the blue reference line's. I thought the top blue line was the bow hair, lol.
It is I who straightened/s my bow's with a heat gun, I don't have a alcohol burner, but I take my time.

I knew that I wasn't crazy. You're the guy Ken. LOL
If you ever do it again, please video it for us.

A straight bow is a happy bow.

Ok to add to this topic of bows. I have a bow that the hair will not tighten on. so being willing to break it. I took it apart to see if I could get the hairs to all one length.
problems I ran into:
1 its a cheap bow, the manufacture glued in all the mortises (so I ended up breaking my pick).
2 I had to destroy the hair just to get it out of the frog.
So when does it become more effective to throw it away and buy a new cheap bow?
Oh and I did this just for the education on how bows are put together.

OldOgre,
Whenever it costs more to fix than the bow is worth. A rehair costs around $50 in US and when I lived in Sweden I was paying $100. With expensive bows it's definitely worth rehairing and fixing.

On a related note, my wooden bow has very little camber to it, compared to my FM carbon fiber bow, so when I tighten it to decent playing tension it looks way overtightened. I often wonder whether this is a problem or not.

I have had a few wooden bows that would really go straight under tension. CF, etc. were much stronger but the wood were still playable. I never owned wooden versions that were as stiff as CF "off the violin".
I really disliked the wood ones because they did not give as much feedback.

Oliver said
I really disliked the wood ones because they did not give as much feedback.

hmmm ... please expound on this feedback that you mention.

Feedback is the sum of things that your bow can tell you:

The direction the bow is pointed in.
How much pressure is being applied.
What sounding point is being used.
Is the rosin helping sound or making it worse?
Where is the balance point?

There are many factors and the violionist is constantly scanning a lot of information. For instance, if I back off on hair tension my double stops are a bit easier but most other things are worse. A weak bow can create problems even if the hair is reasonably tight. Incidentally, I think a tight bow is also "faster". I'm using a "heavy" CF bow and glad about it. My bow also demands velocity for best sound quality.
My bow does talk to me but it is usually a complaint! I can never ignore it and get away with it!

I have a new question on bow. How to understand when time is coming to change a hair? (i mean on a bow, of course. no need to do it on the head)) My bow has started to make sound a little bit metallic. It becomes harder and harder to control pressure on the bow to produce a nice sound. Also, the bow started to require too many rosin. I recognise all these signs as the time to change hair (in my case, it is better to change the bow)). Am I right?

Or is there any method to give him second life without changing of hair? For example, washing or something like that))

I only get my bow rehaired when there's very little hair left on it. Sometimes when the hair is too brittle or no good connection no matter how much rosin you use, that can be an indication too.
Now a days I just grab a new Fidderman Carbon Fiber bow instead of rehairing my expensive pernambuco bows.

Anyway, I should have done this before, just placed an order for the FM CF bow.  Now this I am most definitely looking forward to....

[ As a complete aside and because I like to relate a story - when it happened I had been investigating a "buzzing" noise on my EV it had always been there, from new, and, at the price, better to lose the warranty and investigate the issue, than to go to the effort of returning it.  It was coming from the electronics compartment - something "loose" - you could audibly hear it while playing forte - and it was picked up by the transducer and came through on recording.  It turned out to be "unused pins" on the 1/4" Jack-socket rattling in their holder.  A spot of epoxy (on all the pins-to-socket-body) - buzzing GONE - yeee haaa.  The socket fitted was obviously for a stereo jack (hence the unused pins with no wires soldered - which alone would have deadened the rattle).

I was balancing about 4 separate things at the time - the violin itself, while holding the removed electronics assembly against the body, a finger of the left hand trying to touch individual areas on the assembly to see if that stopped the rattle, and the bow in my right hand...  what happened?  I dropped the darned bow.... maybe I should have just plucked the stings

Bill,
Bravo for finding the problem. It must have felt great. Sorry to hear about the bow. Hopefully the new bow will be rewarding in so many ways that you will be happy that you broke your other one.

LOL Pierre - I just *know* the CF will be way-way-better !    Glad to have put the old one "out of its misery" - at least it was quick and and not "premeditated-murder" on my part.... although there are times n the past when I could have happily wrung-its-neck...

I shall of course give feedback on the FM CF bow once it arrives...

MadBill said
LOL Pierre - I just *know* the CF will be way-way-better !    Glad to have put the old one "out of its misery" - at least it was quick and and not "premeditated-murder" on my part.... although there are times n the past when I could have happily wrung-its-neck...

I shall of course give feedback on the FM CF bow once it arrives...

Sorry to hear about the bow.  I think you'll find that the CF will take a lickin' and keep on tickin'.  If you end up dropping it you'll just pick it up and continue where you left off.  I think you'd really have to try really hard to damage one of those.

Lord knows that I've dropped and hit my bow a few times.