Newbie to this Group

Newbie to this Group

A little bit of myself ...im 53 yrs old, and i used to play violin back in junior high orchestra. My grandfather gave me two violins. One was a 3/4 copy of strad made in Germany and a copy of a 4/4 Cremona made in Czechoslovakia these violins were old but the cremona sounded beautiful and the German strat was more metallic sounding really wasnt impressed with it, but held on to it for sentimental reasons. When i started attending High School i stopped playing the violins and would pull them out occasionally to play it now and then and even in the church praise and worship team. i made the dumb decision to give the violins to my niece since she was wanting to play in the high school orchestra, one year later she stopped playing and i asked for them back and they refused to return them. now in 2017, i went on ebay and just look at the violins they have in auction. Just for fun i bidded on 4 of them not thinking i would win. i won three of the four. so now im waiting on the violins to arrive, i am pretty excited about it but hoping they dont sound too bad, but i am willing to do what ever it takes to make them sound good, new strings, bridge adjustments, whatever. i am a caregiver taking care of a four time stroke patient so i dont have too much time between my job and taking care of her but im going to try and go back to playing again, who knows maybe teach her to play since i have enough violins floating around now, makes for good therapy.

Welcome to the forum, and back to the violin! That's a shame they wouldn't return your violins

I know being a caregiver isn't easy, but it will be a good hobby for you to enjoy again, to help give you some relaxation

Nice to meet you

Welcome to the forum Chiefruneenoze!
You are more or less my age.

I find it appalling that they refused to give back the violins or at least one of them. Why in the world would she keep the instruments if she didn't even stick to it. People never cease to amaze me.
Hope your instruments sound great. We'll give you any tips we can to guide you right.
I believe in your plan to play with your patient and having several instruments make it that more feasible.

Welcome to the community!

I hope your new violins turn out OK. You can have a lot of fun just messing about fixing them up.

Welcome! It'll be fun to hear if the violins sound any good

They say music therapy is amazing for brain injuries so ya never know how they will respond to it. I look forward to hearing about your progress. My own has been slow but steady and i will admit it's one of my favorite stress reliefs!

Welcome to the forum.

Thank you for sharing your story.

I hope to hear more of your re-intro to violin.

update: i got two of the three violins through ebay, these are no name violins. the one on the left is all maple and the one the right spruce top maple back and side. when i got them they looked nice but notice the spacing of the strings and the cut on the nut is off on the solid maple violin and the sound post is way off center to the right. the second violin strings spacing off and the grooves in the nut not spaced correctly either. sound post is centered and varnished and the maple violin unvarnished, both bridges were not cut properly and fat totally uneven and a tad bit tall on both. so the end result i got them both set up with what was sent to me. first the solid maple violin a nice full tone deep and warm and loud in projection, scratchy way up the neck but(not bad since the sound post is way off where it should be) its easy to play...love it...the second violin, is brighter and scatchy higher up the fret board, tone is nice but there is a difference between the two violins...now im waiting for the third one that should be in friday which is the mendini mv300...i know everybodies taste in sound is different but i love the deep warm sounding not so much too overly bright but i will play them anyways. i hope i didnt confuse anybody reading this between the two violins. 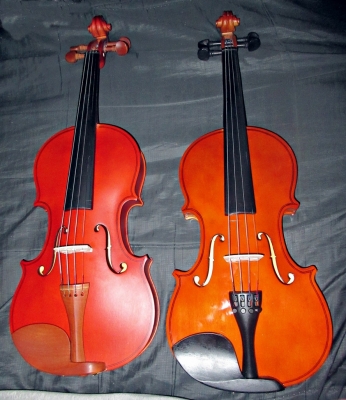 While you obviously have some work to do (or have done) on them, on that all-maple one in particular, it sounds like you lucked out.  The problems it has are all fairly easily fixable, and a full rich tone makes up for a lot of flaws (assuming that it's still there when the soundpost is moved to a more normal position).

You obviously know enough to identify the issues. Will you be doing the surgery yourself, or getting someone else for that?

Awesome @Chiefruneenoze - welcome to the forum, best wishes with both all of your instruments and the pressures of caring !  WTG and respect...

charles, the sound post is going to remain where its at and leave it for a pro to center it along with changing out the top nut on both violins for better string spacing. but i am going to switch out everything else...new bridges and make the pegs stick better and definitely new strings and look into better bows.

well the wait is over i finally got the last violin i won in auction on ebay, the Mendini mv300...omg, this violin is really nice, the string spacing is great the wood antique appearance with matte finish. strings on it are old but will be replaced with new strings later, the bow is in really good shape. the shoulder rest is cheap but no biggie i have two others in better condition but i actually dont use them when i play the violin. the tone is really nice and warm sounding. i dont know if its just me but i notice that a violin that has been varnished the sound is bright and the violins that arent varnish have a deeper tone to them. 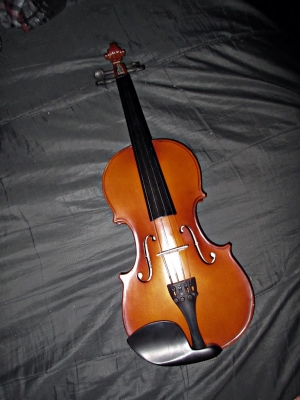