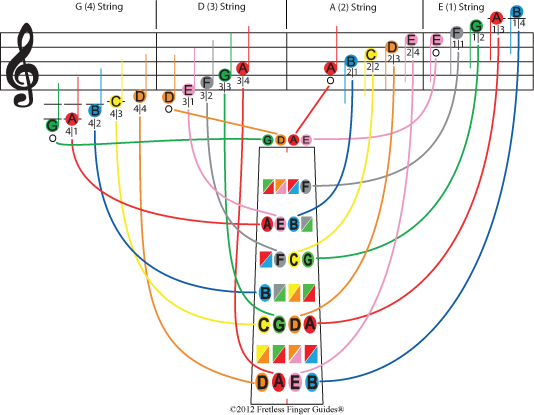 Welcome to the forum and happy learning!

if they did not write that in the picture , how can i know where should i play

You have a choice of playing a fingered D on the G string or an open D on the D string. If you are using vibrato, you must do the fingered note, as you can't do vibrato on an open string.

Similarly, all of the notes shown on the D string except the A are lower than the notes on the A string, and the same goes for the E string versus the A string.

I hope this helps. If not, maybe someone more experienced can give a better explanation.

Playing the open G string, playing G on the D string, and play G on the E string give you three different notes that go by the same name.

When there is a chance of confusion, those three notes may be called G3, G4, and G5.  They are different kinds of G notes.

Those three notes sound different, but they also sound somehow the same.

That is because they are octaves of each other.

thanks to all , i understand now , i was not understand the picture well , thank you

Glad you now understand. I was confused by the questions. LOL
I was going to say that they put a 0 under all the open strings.

yes dear , i understand now , i was ask to know why i should play them like the picture , but i found that the picture is the the basic , and can not say way , just keep it in my mind ^_^