So I received my own set of Fiddlerman Strings. As every time I try and test a new string I was excited, and really curious of what would happen. This time my curiosity was considerably more intense, since the Fiddlerman Strings were initially launched as a string set similar to the Thomastik - Infeld Dominant, and of course is manufactured according to the standards set by Fiddlershop which is so closely related to the whole fiddlerman.com community

This whole procedure begun when I posted a string chart, because I felt the need to share whatever experience I had gained through multiple string trials and comparisons, in my attempt to find the best string possible for my instruments. This Chart did not include the Fiddlerman Strings, which I had never tried before, and that issue of course had to be addressed

At the time of this trial, I am in a vacation visiting my parents, so I got with my my back-up instrument, and not my primary one. They both share some common attributes (good projection and response and they are both relatively powerful). The primary violin was made in the Kaiming workshop and was set up by luthier Sebastian Seixas in Athens, Greece when I got it some years ago. The back-up (used in this trial, and in most other string trials as well) is a Chinese factory violin, really played in (I have been playing it for the last 17 years at least) and when I started using it as a back up, I experimented on the instrument to bring it closer to my sound preferences, by planning the fingerboard, and crafting new sound post (fiddlerman's video was of some great help) and bridge (I really crafted a lot before the last one which I consider acceptable). In the past, some revarnishing process took place (it's not proper, but ...). The back-up is the hardest of both violins to "please" with a string set, as it is a really bright violin - contrary to the darkness the Kaiming has. Both violins however work really well - one could say at their best - with the Thomastik Infeld Dominant (To be honest, I use the whole set on the back-up and swap the E on the Kaiming for the Pirastro Eudoxa E). So mounting the Fiddlerman Strings on the back up (as I did) is a fair test.

The bow used was nothing special, just a cheap bow I use when I travel, rosined with Pirastro Eudoxa rosin, which is my favorite when using Dominant strings, so for the needs of this trial, I kept the combo.

First of all, the Fiddlerman String set looks really nice, and it seems as if the quality control is great. I was really pleased to see that the strings are sealed (otherwise I keep backup strings in string tubes in my cases, due to high humidity levels). The silking on the tailpiece end is adorable, and I don't recall another string using the exact same combination. (Some could say they look like Eudoxa, but hey, it's another purple, not this one

). When I looked closer at the string windings, I was fascinated to see that they are really smooth.

Before picking up my bow, I placed my left hand fingers on the strings, to get a rough idea of the feel. The thing that I noticed at first is that there is an aluminum wound D (which I rarely use, so this was the most "different" thing, but it felt good, and really close to the aluminum wound Dominant D). All strings felt smooth and pliable, and there was no roughness or annoying tension. When I started playing I wash shocked of how close they are to the Dominant in terms of feel in both hands. Yet the Fiddlerman Strings felt a little more "polished" and the only difference was that the G string gave me the impression that it could be pushed a little harder than the Dominant G. (To make myself clear I also love the Dominant G, and I had never had issues of sound cracking etc in both my instruments, but the Fiddlerman G gave me the impression I mentioned)

With just two words : Perfectly Balanced! Especially on this instrument it's a rare thing, and the only sets I found equally balanced to the Fiddlerman were Obligato, Dominant and Crystal. Regarding the Dominant I think I have wrote enough, the Obligato was great with a unique tone but considerably more expensive to replace every few months, and the Crystal gave this bright violin more low end punch but lacked a rich overtone on this instrument. The Fiddlerman set was like a perfect match. When playing chords in all four strings it sounded really full and broad, and each string was matching and complimenting the rest. I even liked the D and G combo even though I prefer silver Ds, the aluminum D brought the G forward which was a good thing for a bright instrument. The E, was so sweet. As a set I had to focus really hard to tell them apart from the Dominant, but if compared individually there can be sliiiight differences.

Overall, in a hurry I could not tell them apart if there were no silking codes. If I really had to make a descision on how they differ I would say that the Fiddlerman set is slightly warmer. Perhaps it could be subtly louder but I am not so sure of this since the Dominants I took off the violin were already used (but not dead or false) 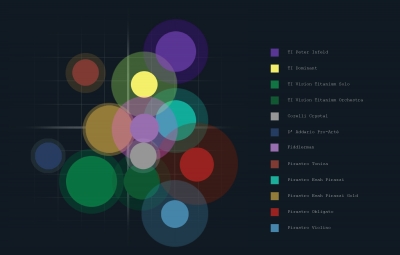 And a small video

lovely review :D. I have yet to try his set on my new instrument but I can't wait to hear how it does as I currently have Oblegato's on mine as well.  Oh and your violin is really neat looking.

rockinglr33 said
lovely review :D. I have yet to try his set on my new instrument but I can't wait to hear how it does as I currently have Oblegato's on mine as well.  Oh and your violin is really neat looking.

There is a chance you'll be lucky as well with the Fiddlerman Strings, as this violin also worked with Obligato, the reason I swapped them from Dominants was mainly "financial" haha

Regarding the looks of my violin, well it went through much "adaptation" but I would have never done the same on an expensive instrument with a good varnish

Thank you Pierre, and thanks for the whole experience

Feel free to use the chart, and let me know if you want to make any adaptations...

Hermes, what a thorough review, and I love your playing! I need to hurry up and get my Fiddlerman Strings!

I am a violinist cycling around the world with my dog, Fiji, and my violin. http://www.FiJaPAW.com

FiJaPAW said
Hermes, what a thorough review, and I love your playing! I need to hurry up and get my Fiddlerman Strings!

Yes, get your set, I'm sure you will be surprised in a positive way

P.S. I don't remember if I stressed this enough, but I sincerely think these strings could be the best bang for the buck, imho.

@Fiddlerman just for the record, what exactly is the core? perlon? multistrand synthetic? both?

Just in passing - I liked @Hermes original post on this subject, and I also have a set of the FM stings - they are, compared to the much fewer number of strings I have so far used, definitely in the "place-on-the-chart" as indicated by Hermes.

They are darned good strings, and I, as many have said, are very very close to, if not in some ways better than the widely used dominants !  ( But that's very subjective and instrument and style dependent, and my own feeling about them )

Thank you for the detailed analyses @hermes !

@BillyG Thank you for your kind words...I am excited that you agree on the placement in the chart, they are a so round and full sounding string set that honestly I found it difficult to decide where to place them...