Hi folks - quick background to this.

Back in 2014, our member Barry Nelson got a number of us eager beginners to take part in a streamed-live-event on http://www.streetjelly.com - the event was called "Streetjelly Fiddlefest".   Over the following years, we regularly arranged a repeat event, round about late October to November, and for the last couple of years the arrangements were taken over by both myself and Mandy (@damfino).   This is now the fifth such event coming up.

Fall 2018 has been real busy for me, and I was unable to arrange anything timely, however, that's no reason not to do it, and the best I can come up with is sometime January 2019.   I have picked Sat 26th Jan 2019 as the day of the event.   The date is not up for negotiation (sorry!) we spent DAYS a couple of years back trying to accommodate the various "oh, can you make it a day later / next week" and so on - sorry - just the way it goes!!!!   I did make one VERY SPECIAL allowance - it would have been scheduled earlier - but - I didn't want it to interfere with the planned visit to FiddlerShop a week earlier (around the 19th ??? I think), and although it's out of the question for me, I know a number of our active members are going to be there.

I'm not going to either bore folks here, or spend an hour describing it - if you are interested in this, but new to idea - use the forum search to find all posts and threads relating both to StreetJelly and FiddleFest.  There are detailed descriptions of (a) how to use StreetJelly and (b) the "protocol" or "etiquette" we use to schedule multi-player events on SJ, just so that different performers don't accidentally overlap their shows.

For this event, Fiddlefest 5, if you are taking part, PLEASE - you MUST entitle your show "Fiddlefest 5, xx mins" -    normally, folks will go for a 30 minute show ( xx = 30 ) - but shorter is perfectly acceptable if that's all you are happy with (hence the planned time, so others can schedule around you)

And here's my scheduled show on SJ  - (I have obliterated the time to save confusion - I'm in the UK and I see the time in GMT ( my local timezone ) - you'll have to look on the SJ site to see when that is in YOUR local timezone (clever little Streetjelly!) if you're non-UK) - so that's the plan - schedule before, after, or whenever - any time within a sort of 24 hour span - it's always nice to get consecutive players though so there are no gaps in the overall event..... 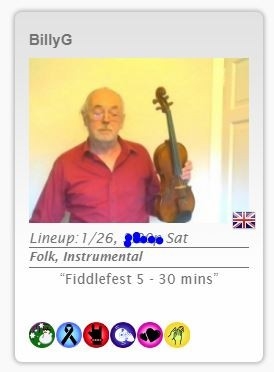 I'm actually still a little bit wary of putting effort into this - the uptake on the earlier "Amateur Hour" failed miserably - but we'll have a shot at it anyway !

Oh - a final word for newcomers - the event is primarily supported by Fiddlerman Forum Members - but it is NOT exclusive to the FM forum - the event as originally started by Barry was called Streetjelly Fiddlefest (because we brought in players from streetjelly, who aren't forum members - it's open for any bowed string player, that's the point), but for some reason the event name kind of morphed into "Fiddlerman Fiddlefest" for a couple of years - it's all the same event - and I've taken it back to its intended name !

Great @BillyG, looking forward to it

I will be the audience

Make your plans over the holiday break !

Two committed so far (and we probably should be!) - I've obscured the actual show times - you'll see them as the correct time for your local timezone by going to http://www.streetjelly.com

And to you for being in the audience @mookje

BillyG said
Two committed so far (and we probably should be!)

I'll be broadcasting from my padded room

All the effort to pull this together is much appreciated! @BillyG  @damfino

I have tentatively put myself on for a 15 minute show beginning at 10:30 (or whenever you are done Billy). To pull this off I will have to solve my technical difficulties......the last time I tried this I even contacted StreetJelly and they couldn't resolve the issue. Their best suggestion was to use another browser like Firefox. So I'll give it a whirl and test again. We shall see......if I can't make it work, I'll at least be in the audience.

BTW, has anyone tried using their phone to do these broadcasts?

Come and let us reason together.

Now - about the "technical difficulties" - let me suggest we plan a time together that suits us both - and let's make at least 30 minutes to an hour available - and we can talk through the issues, and hopefully run a short (not for the 30 mins - just long enough to get it going ) live-test on SJ.

Done this before with others, and usually, we get to the root of the problem, although, I did have to give up with someone using Windows 10 (although it worked for me on Win 10, although I hate it with a passion !)

If you care to do this live-trial - PM me through the forum and we can arrange a mutually convenient time !  [ As you know, I'm in UK and 5 to 7 hours ahead of USA timezones, but I can be pretty flexible about it... ]

Three committed so far - I've obscured the actual show times - you'll see them as the correct time for your local timezone by going to http://www.streetjelly.com

And to you for being in the audience @mookje

-   although we are likely to have Barry and Rob Van Neil schedule nearer the time...  but another 5 or so would really help...

The acoustics won't be the best, but the real struggle will be playing with that darned straight jacket on.

@CyndieZ Firefox works best for me for StreetJelly. I have very few streaming hiccups with that browser.

Thanks Mandy! @damfino  I'm going to give it a whirl! Your broadcasts seem to go smoothly!

Come and let us reason together.

I am surely interested... I work on Saturdays... so If I can play it will be around 3:30 pm CALIFORNIA TIME...I don't have new stuff...It would be a memory...and I wonder if I even play better LOL.

now I have to find the old laptop and funny mic and see if I can make it screech loudly will bad sound from my office...

It looks like some reply’s are gone, maybe because of the problems there were on the forum with the reply button.

@mookje - well spotted - yep quite a few responses in this thread have disappeared.

And yes - I'm working on Drowsy Maggie - I still trip over the B part a little bit because it is very similar to another tune I know in my head, and that seems to take-over

It's all OK if I go back to sheet, but I don't play so fluidly if I'm sight reading - so a little bit more work required !  Hopefully it will be passable come the 26th !

So far we have 5 confirmed players, and, most likely Rob van Neil will join us as well.

Current line up is -

And of course, as ever - for those new to SJ - you'll see the show times in your local timezone by going to the SJ site - http://www.streetjelly.com

@BillyG I’m looking forward to 26 January, it’s gonna be a beautiful musical day, and fun of course. Good luck with drowsy Maggie, I’m sure you can do it!!!