chin rest fix I found in the kitchen

chin rest fix I found in the kitchen
How to make your wife mad and cushion your chin rest at the same time :-)

I thought I might share this not because I'm a cheap skate but I just don't intend to by a bunch of accessories that aren't going to work for me so I had a choice to make grow a longer neck or try buy twenty different chin rests just to find out that neither of them are going to solve the problem for me.

You would think with all the bright people in the world that by now someone would have come up with a chin rest that does not get shoved up into your jaw as your trying to play and I'm sure I'm not the only one who has noticed this.

Well Saturday afternoon I was getting a cup of coffee and while waiting for it to brew up I noticed something hanging next to some regular pot holders in the kitchen its a 7 inch in diameter silicon disc,well I grab that sucker up in my dirty little string pinchers and off I went.

I grabbed one of my violins folded this thing in two placed it on my chin rest and held the violin in playing position and finally I had found something to pad the chin rest and also not have to worry that I might drop my instrument it grips rather well and doesn't have to be glued in though I did have to cut the disc in half which gave me more than enough for both of my violins.

It worked for me but might not work for everyone it was nice that it was readily available at any rate,their called trivets kind of strange name I'll post a picture here I know they can be found in house wares at wally world. 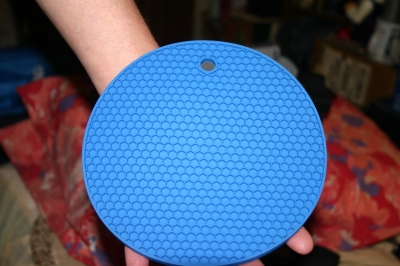 A Man after my own heart!

Thanks for posting that idea.

Whatever works! Just make sure you buy your wife another one.

There are so many things in our kitchen that my hubby and boys have found a different use for...keeps me on my toes, when something is missing I always wonder where I am gonna find it and what they were using it for!

- glad it works for you

That's funny and smart. Glad you found something that works and doesn't cost you more money.