@bunify .  It had to be the a string!  I definitely do not see an interference problem with the other strings, and with a lot of magnification of the image I do not think that there is an interference issue with the a string.  But there is so little lighting in that area (which is nearly under the scroll) that the picture is not definitive.  Another picture that clearly shows the inner wall of the peg box intersecting with the peg would be welcome.  You might have to hold a small flashlight in one hand and the camera in the other to get the shot.

The A string doesn't look too tight against the box, but it does look messy. I suggest you unstring the A string and do it like this video. I think Fiddlerman says push it in a half inch. Some people guess badly how long a half inch is (do 2cm rather than 1 cm). You can insert a little more if you feel the string is touching the box. The other possibility is that the hole in the peg is too close to the pegbox. Can pegs have a manufacturing error like that? In fact, is it just me, or do bunify's pegs look rough and horrible?

Well Gordon, I think we are both assuming that the original poster removed the offending peg to apply peg drops (which is what I and likely you would do).  From the appearance of globs on the pegs, I now think that the material was liberally applied by the original poster to the pegs as they rested in the pegbox with a hope for the best.

Another grim possibility was that all pegs were removed at once to be randomly reinserted (each peg and its corresponding hole in the pegbox are mates and should not be subjected to inappropriate pairings).

I personally do not like peg drops. They cause the pegs to stick too much. Paste IMO is way better. Keeps them from slipping and sticking. Allows you to press in more without hurting the instrument.

@Fiddlerman and others.  If you scroll back a page in this thread, you will see a photo take by the original poster of the strings in the peg box.  The area of the a string peg/pegbox interface is rather dark, but if you follow the visible pegbox wall and interpolate the point of likely interception with the problem peg there does not look like a string interference issue.  What do you think?

I bought some paste from an Amazon supplier, but when it arrived it was rock hard and rattled in the tin, so I guess it was old, and the stuff doesn't sell that well. I rubbed it vigorously onto my pegs. My teacher said, don't bother with peg dope - use graphite; so I have some 3B pencils for the nut and bridge and some 8B artists graphite sticks for the pegs in future. 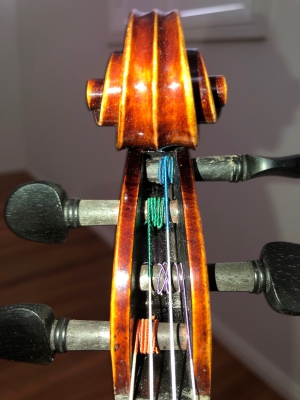 This is a clearer photo of the string in the peg

@bunify .  The second time was the charm.  I see two problems with how the a string was wrapped on the peg.  As Fiddlerman surmised, the string is too close to the pegbox wall and may well be causing your issue.  It also looks like the string is leaving the peg from an underlying layer, which may cause tuning issues.

I would unwind the string from the peg, physically remove the peg and wipe it with a tissue to remove extraneous material, apply a drop of peg drop to the peg holes (one per side of the peg box if you have a vial handy), cut about a 1/2” off end of string (you only need 3 to 4 wraps around peg to fully secure string), and rewind the string around the peg per provided video.  You should be good to go.

Use how the g string is wrapped as a guide.  That one looks perfect.

edit:  the wrapped portion of string toward the peg box may be shortened by the use of a nail clipper or similar.  I use a bicycle cable trimmer.

Additionally, like I said, those strings aren't inserted enough. That G string is only poking out a couple of millimetres. Make it a full half inch. The way Fiddlerman shows, they cross over themselves twice, and that's enough for them to hold - they don't need to go around the peg half a dozen times as well

@bunify - That would be the A string from the picture. Did you ever work it out? Is it still stuck?

I haven’t had the chance to look at it yet, but I will on the weekend. 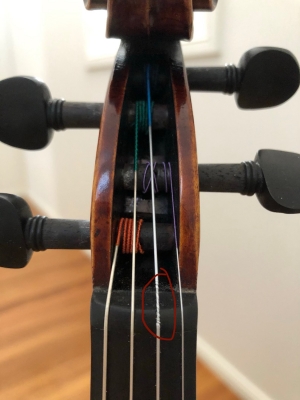 None of my strings is frayed like that at the nut or the bridge. How long have they been on your violin?

I wonder if you are putting enough graphite on the nut.

I’ve had it for several months now but I only play on the weekends. The strings came with the violin I had gotten from Fiddlershop.

We shipped the instrument on Nov 6th so if it's the same string, it's 5 months old. However, I have a recollection of sending you some strings afterwards. Am I confused? Did you ever change them?

When the string gets frayed at that spot, there could be a difficult edge. A fine needle file rubbed very gently in the groove and direction of the inside edge of that groove, and or graphite (pencil lead) should rectify the issue.

It could just be worn from age and tuning.

@@Fiddlerman it is still the same string that came with the violin.
No, you didn’t send me some strings afterwards. You did send me peg dope and the tailpiece afterwards though.

Oh, I see. I just remembered that we had exchanges about strings that could warm up the sound among other things.

@bunify .  I am glad to learn that one of your original issues with the violin appears to be resolved.  Regarding your most recent posting, please be apprised that strings are by nature ephemeral.

For comparison here's what my Dominants look like after 9 months' continual playing on my Gewa. They are hand-held pictures, but I think they are clear enough. Note my pencilling on the bridge. It is on the nut too, but of course you can't see it. 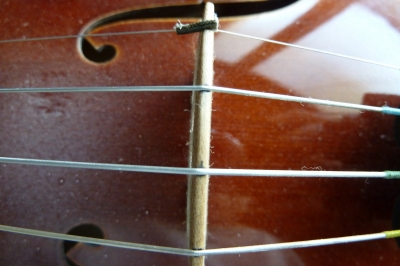 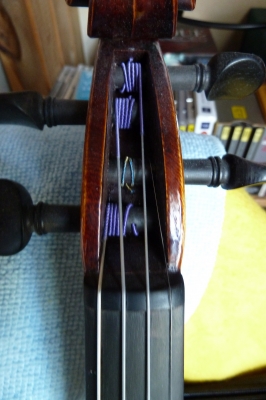 From the location of the fraying (mostly on the pegbox side of the nut) it looks like there has been a lot of movement back and forth across the nut. Strings don't wear that far on the pegbox side of the nut from regular playing, only from tuning with the pegs. And most likely there is either a sharp edge somewhere or not enough lubrication. I only have one fine tuner, so I tune three of my four strings only with the pegs, and my strings don't wear out nearly as fast.