Revisiting a January 6, 2012 Topic - Setting up a Violin/viola

Revisiting a January 6, 2012 Topic - Setting up a Violin/viola
This topic is still an issue for many today and Fiddlerman has a really good explanation.

In searching through old threads to see if there was something interesting or still an issue for violinists/violists/cellists, I came across this thread in The Violin Section started by 2manynotez on January 6, 2012. It is on page 84 of The Violin section. Fiddlerman has a response, #6, that is very helpful, so I thought I would provide a link for you all.

This thread is about getting your setup correct, and this is a topic that just about every violinist or violist has dealt with and is never-ending.

I will continue reading through old posts and bringing to the forefront, those that may be helpful, or just plain interesting.

I think finding the right shoulder rest/chin rest combo can take some time.  Also, I think this set-up can change, particularly for adults.  I think young children starting out kind of shape themselves to their instruments.

I initially started with a Wolf Secondo & a Guarneri chin rest.  I injured my left shoulder (fell off a ladder), & exacerbated it by how I was holding the violin.   As a beginner, arm positioning can feel awkward.  It is important to not tense up. And if what you’re doing is causing pain, stop.

After 3 months of physical therapy, I changed to a center chin rest (Flesch with hump), with a Comford shoulder cradle, and was comfortable with them for a couple of years.

Then after a while, these didn’t feel as comfortable (seems to coincide with when I was doing more shifting), and I tried a few different combinations again.  I ended up with (& use now)  a Bon Musica shoulder rest with a Wave I 1” chinrest.  The Wave is like a compromise between a center & side mount chin rest.  Don’t be afraid to improvise.  A woman who played viola in the ensemble group I used to play with used a piece of cardboard wrapped with shelving paper in lieu of a shoulder rest—it worked well for her.  I use a piece of cosmetic sponge on my Bon Musica so that it doesn’t dig into my chest.  Working well (for now). 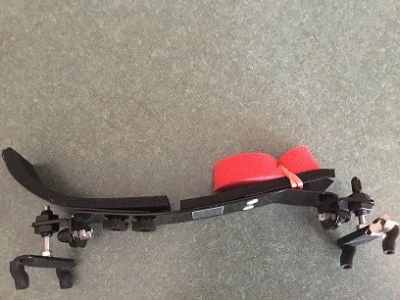 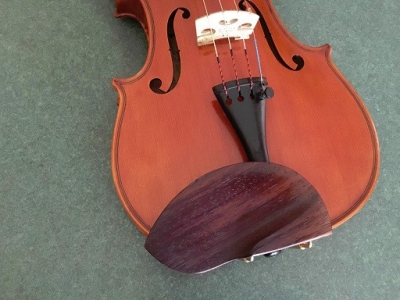 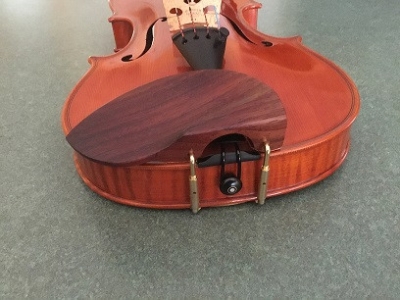