Julia Fischer up for a Grammy

Julia Fischer up for a Grammy 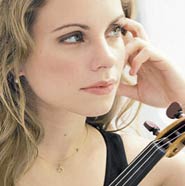 Julia Fischer up for a grammy

German violinist one of several string stars vying for awards

Julia Fischer is one of the bigger string luminaries to feature in the nominations for the 53rd Grammy Awards, which will be presented in Los Angeles on 13 February. The violinist is nominated in the Best Instrumental Soloist Performance (without orchestra) category for her Decca recording of Paganini’s 24 Caprices.
String players occupy four of the five nominations in the Best Chamber Music category. Isabelle Faust gets a nod for her disc of the complete Beethoven violin sonatas on Harmonia Mundi, as does the Parker Quartet for its recording of Ligeti’s String Quartets nos.1 & 2 (Naxos). Joining them are the Fred Sherry Quartet with Schoenberg’s Third and Fourth quartets (Naxos), and Eliesha Nelson for her disc of Quincy Porter viola works (Dorian Sono Luminus).
In the orchestral arena, the Metropole Orchestra from the Netherlands received three nominations, among them for Best Large Jazz Ensemble Album and Best Instrumental Arrangement. The Metropole Orchestra is one of three Dutch orchestras under threat of closure because of government plans to cut arts funding.