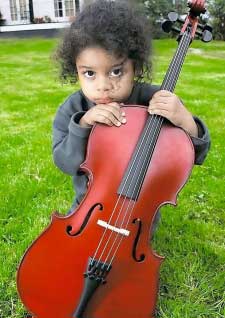 The show will go on for Jahleel Weisser of Holy Lodge Mansions on the Holly Lodge Estate in Highgate, after readers pledged more than £500 towards getting him the new stringed instrument.

It comes after this newspaper published his appeal to raise the much needed funds to buy his own cello after Archway Children’s Centre cuts his free music lessons and instrument loan.

Delighted Tamatha Weisser, Jahleel’s mum, said she was “overwhelmed” by the response.

“I can’t believe it, this is amazing,” she said. “The speed of the response and the level of generosity is just unbelievable.

“It will just take the pressure off me trying to find some form of funding. It felt like I kept hitting a brick wall because of his age.

“I really felt this year was the window of opportunity to devote himself to the cello before he goes to school. And now he will get to do that.”

The four-year-old first picked up the stringed instrument last year at the children’s centre, where he so impressed the two cellists who ran the class that they agreed to give him free lessons and loan him a cello.

But they have been forced to withdraw the loan after Islington Council ruled that no child outside the borough’s borders could go to one of its centres – even if it is their nearest one.

Jahleel had to hand back his cello last Saturday (September 24).

Single mother Ms Weisser said: “He is going to get so much pleasure from this. You don’t know if he going to take it to the highest levels, but it is enriching in and of itself. It is amazing for him to experience.”

One of the donors, who wanted to remain anonymous, said: “No child should have to do without music once they have developed a passion for it.

“I am pleased Jahleel has found such a love for this instrument, and wanted to do what I could to help him continue with this.”

via Ham&High readers pledge to buy Highgate boy his own cello – News – Hampstead and Highgate Express.