Unique shoulder-rest now on the market

Ever felt like none of the shoulderrests available suit your needs? So did Fred in Southern California, but instead of continuing his search, he decided to do something about it. 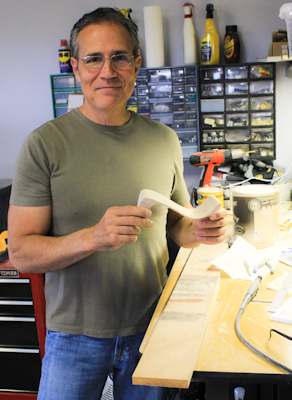 Fred and his trade marked, “The Slipper” shoulder-rest

Intelligent and well-spoken, in recent years Fred has moved his focus from MMA (multiple martial arts) fighting to playing violin and fiddle.  We found out in the course of this interview that his favorite audience happens to be just a bit unusual.  He still keeps busy with snowboarding, wakeboarding and other extreme sports as well as diverse artistic pursuits.  If Hollywood was looking for the next great action adventure hero story, they should talk to Fred.  The only question would be whether it might be better to have his character played by Bruce Willis or Steven Seagal.
Recently he also has been exercising his abilities as an inventor and turned his attention to solving the long-standing problem of violin shoulder rests that are simply neither ergonomic nor aesthetically pleasing.  Even if you don’t mind buckling a crude looking piece of plastic or metal to a musical instrument worth hundreds to thousands of dollars, the problem is that poorly designed shoulder rests can damage the instrument and even injure the violinist due to muscle stain and pressure on their bones and joints.

Read here what Fred had to answer to our questions.

About “The Slipper” shoulder rest, what problems or issues did you see with standard available shoulder rests that made you think “There just has to be a better way”?  After having spent a couple hundred dollars on a multitude of different rests, I still never discovered a solution I was happy with.  Every rest I tried, and I’ve tried most of them (a couple by Kun, Mach One, a couple by Bonmusica,  foam rests, and various combinations of them) never resolved the discomfort I experienced every time I played or practiced.  The biggest issues for me were neck strain, and pressure from the chin rest bracket on my collar bone; not being able to keep my violin stable and in place was merely an annoyance; I always seemed to keep re-positioning it on my shoulder.  Until I actually decided to design my own solution, it seemed the closest solution was a thick molded piece of foam held in place with a large band, however it kept slipping and moving out of place, which again caused contact with the hard bracket.  But clearly it was the discomfort issues that motivated me to take action.    Besides my discomfort, I couldn’t imagine that I was the only person experiencing these same or similar issues. 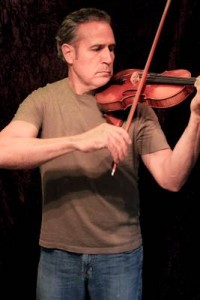 How did you come up with the rather unique curve of the rest?  I spent a lot of time analyzing the causes of my discomfort and dissatisfaction; they were because the instrument was positioned too low, and the instrument slipped around and never stayed in one place.  As a beginner, trying to find a way to keep my violin in place while at the same time needing to move my hand back and forth to attempt vibrato was just a combination I was unable to achieve.  So I began cutting out contours from scraps of thick closed-cell foam and experimenting with them as a replacement rest for all of the expensive rests I had purchased.  The more I fine-tuned the shape, the more I discovered the shape that was developing was something that partially looped over the top of my shoulder on one end and supported the instrument off my chest on the other end.  So it turned out that the three critical components for me were a partial loop over the shoulder, the short leg in back and taller leg in front, and the contour of the rest to the body at all points of contact with the body.  In addition, I tested a dozen different materials for the foam pad, looking for a soft foam that had a high degree of tactile grip or surface grip as well as memory that wasn’t too thick or too thin, before I came upon the pad now used on the rest. 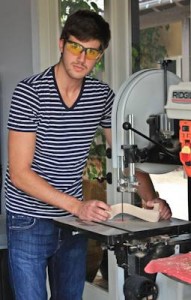 What were the steps you went through in it’s evolution?  I may have answered this question in the last two questions, sorry.  The most difficult challenges weren’t related to designing and making the rest, but establishing a related business that my son Nick could own and operate.  Nick is just starting his first year of college and is working p/t at Subway.  His interest is in International Marketing (Japan specifically) I am a firm believer that the best way to learn business is to run a business.  So I have helped him set up all of the grueling minutia related to starting a business.  The website development has been the biggest challenge for me.  I am a finance guy, NOT a computer guy.  I developed the design of the site and stumbled through the initial setup, but the functionality of the site was very challenging for me, and for some damn reason, site development tools are not “simple” and they are not “intuitive”.  Pierre (Holstein, aka, Fiddlerman) was very instrumental in helping me get the site functional.  You can see it for yourself at www.theslipperrest.com

Why do you feel it is the best shoulder rest?  In other words, how do you feel it is better than the other manufactured designs available?  Very simply, because it’s the most comfortable, stress-less, and stable design I’ve ever used and a lot of players who’ve tried it say the exact same thing.  So far, nothing comes close.  An important component to this rest is that it is hand-made of quality materials, which not only lends to its durability and useable life, but also to its beauty and aesthetic appeal.  I don’t know of a rest that compliments the look of the instrument it’s attached to better than The Slipper.

What interests/qualifications/experiences does your son have that you feel make him a great person to do fine craftsmanship?  Nick is a meticulous craftsman who, for the most part, can create what he sees.  He is 19 and has been developing his woodworking skills for the past 4 years.  When I finally showed him my first prototype, which by the way was very rudimentary and bulky and heavy, I asked him if he thought he could make something like this.  He took my prototype to the workshop and a few hours later came back with a sleeker version of exactly what I gave him.  He made his first out of pine, which was very difficult to work with, so I was confident he could produce exactly what I was after, given a finer piece of wood.  We now use an expensive blemish-free, tight-grained, hard maple.

What kind of strings and rosin do you use?  I primarily use D’Addario, Pro Artes and Zyex.  The rosin I use is pretty common, it’s the D’Addario Natural Dark.

What kind of bow do you like best?  Both of my bows are Cao’s, one is rosewood and one is pernambuco.

Do you play any other instruments?  As a teen I played guitar, poorly, strictly to showcase my softer side to chicks; it was pathetic, lol.

How long have you been playing violin/fiddle?  1 week shy of 6 months.

Did/do you take lessons, or are you self-taught?  I am fortunate that I found a really good teacher in my neighborhood.  I could write pages about why he’s such a great teacher.

When/how did you first get interested in playing violin/fiddle?  I am now 57.  I have wanted to play violin for the past 20 years, since I first heard Stephan Grappelli, but it wasn’t until I saw & heard a video of Annie Staninec and Luke Abbott playing “Roscoe” that I was compelled to buy a violin and start learning.  Annie is an incredible young fiddler who is a wonderful human being.  We’ve communicated several times and her sincere, down-to-earth spirit is very endearing,,,, then when you watch her play, you are blown away.

What was the first song you learned to play on violin/fiddle?  The first real songs (aside from scores of etudes) I happened to learn were Christmas carols, just because that’s the time of year I first got my violin.

What song/piece are you working on most recently?  I am currently working my way through Mark O’Connor’s Violin Method books which I rave about.  Outside that book, the last few songs I learned were, Blackbird, Yellow Submarine, Amazing Grace, & Danny Boy.

Do you see yourself as more classical oriented or more folk/fiddle oriented?  I clearly find Bluegrass/Folk more appealing at this point.  There’s just so much more of a connection for me with those songs.  And the nice thing about them is, there is a simple version and a very stylized version which is much more difficult, and you can work your way from simple to complex in comfortable steps.  My goal though is to play more jazz & blues violin as well as Bluegrass.

What do you like most about playing?  It’s just very rewarding to see my progress.  It’s about the only thing I do that is just strictly for me.  I also like being able to experiment and improvise, well, to the extent that I can anyway, it’s clearly becoming a creative outlet, the more I learn.

Have you done any public performance? (and yes, for family/friends does count)  I’ve played a few times for small groups of friends and/or family, but I think to date, my best audience is the wildlife that I play to from my veranda,,, they are VERY non-judgemental; if they like it they stay and listen, if they don’t, they quietly and quickly dispatch themselves without comment. 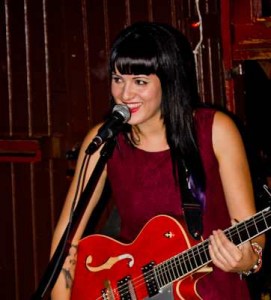 Is there any one song/piece, where if you could play it well, you’d feel like “Ok, now I play *good*”?  No one song comes to mind actually.  My goal is to be able to play/jam with other musicians.  My daughter is a professional musician and my dream would be to be good enough to jam with her and accompany her.

When you are not playing violin/fiddle, what is your favorite pastime?  My favorite pastime isn’t “work”, but that’s what I seem to be doing a lot of lately!  It’s very depressing to admit, but I no longer participate in my lifelong passion because of my advanced years; I used to LOVE training in mixed martial arts (MMA) and fighting each week.  It was a very exhilarating sport and kept me in the best shape of my life; you tend to become very motivated to stay in great shape when you know the consequence for not doing so is most likely getting punched in the face, or worse.  So now I get my kicks from snowboarding, wakeboarding, photography, collecting contemporary art, and traveling.