Breaking the Mold
Sometimes I might offend violin tradition. So I ran a demo of sorts to show what I mean.

First there is a short audio clip for you to hear. The question is about the apparent quality of the instrument. Any good? Mission impossible? Average?

Any sound you hear is coming from this: 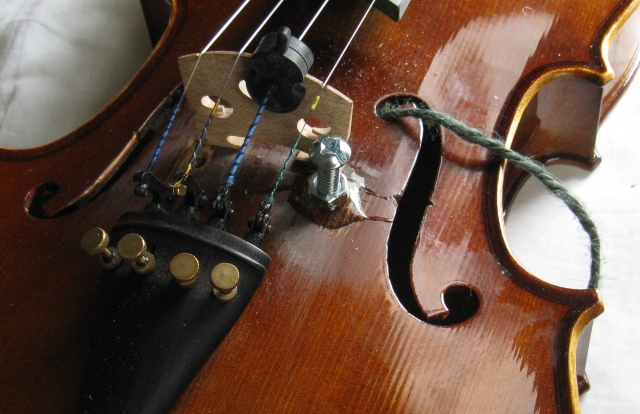 This is an original Chinese VSO but it was to be a 15" viola. No way. Terrible sound. I had to operate. The screw is an adjustable sound post and there are assorted atrocities to see. The viola is strung as a violin.

What type of pickup are you using, piezo?
Got a bit of noise/hum, but once that is taken out by noise elimination, I don't think it sounds too bad. Sound is maybe a bit thin, but a bit of eq would fix that after noise issues were taken care of.

How did you mount the pickup, since that doesn't sound much like the usual piezo under the bridge type of mounting?

The notion of an adjustable soundpost is wild enough and interesting enough in itself to get my attention. That is def "out of the box" thinking that I feel has some real potentials.

Assuming you are using a piezo pickup of some sort, then a preamp with a very high impedance input and a low impedance out, maybe mounted in, on or at least very near the instrument would likely take care of the noise issues and would allow tailoring the basic eq of the sound a bit.

But I think you have some neat ideas going on with this project, for sure.

Offending tradition? Well, if somebody chopped up an antique Strad or etc to do it, I'd think that was maybe inappropriate. But a modern affordable VSO? Who cares about tradition?
The "traditional" Florentine holes were once a wild idea that probably offended people used to seeing round or crescent shaped soundholes, and the scroll was once a new idea that replaced carved people and animal heads and probably offended somebody back in the day. I am sure that with both those ideas (to list just two examples in the evolution of the instrument) plenty of folks were offended and even more said it could never work. LOL

Some days, you just can't make eggs without breaking a few omelettes.

Don't fuss about the audio. The set up was lousy on several counts and the viola(?) sounds MUCH better in real life. I have a few ideas to improve my recordings but I'm more of a music guy than recording tech. I would love to own a decent stand alone camcorder which I know some members use with good success. In fact, I'm here tonight to try using QuickTime on this MAC.
I'm mostly amazed at how much this instrument was improved with just a bit of tinkering. In fact, it has the best sound of any violin I've ever had and that includes my advanced student ($2000) model. And the added space with the 15" instrument has bumped me up a level in performance and comfort. The joke is that I think I paid about $78 many years ago from EBay when VSOs were in their infancy and everyone said I was crazy (they may have been right!)

The important thing is that you are happy with it Oliver. Judging the quality with a recording that you admit sounds much worse than live plus our lousy (in many cases) computer speakers.

Very interesting that you were able to improve the sound with a metal bolt and nuts. LOL
That is almost a viola joke but I won't.

wow thats an awesome idea! I know my husband would like the larger neck of the viola then the violin. he's got some pretty big/callosed hands so i might have to pick up a little VSO viola and play around as well. this is so cool. I thought the recording sounded pretty good, considering the sources and i'm sure sounds 110% better in person

If the idea is of interest it is certainly worth a try at VSO prices. I'm not saying that VSO's automatically morph into something better if you restring a viola to a violin. I CAN say that the added space seems to be a real bonus for a "larger" player. (I'm sure I'm bigger than the average player at 6-1, 240 and with large hands.)
However, I do know something:

The longer viola tends to pull the left wrist out of a bent (too much) position and this improves all the dynamics. This also changes the attack angle of the fingers. Bottom line is that the viola shape makes more sense for the large person.
The best wrist posture is discussed in many web tutorials.
I am tempted to try a 15.5" but the 15 has some advantages ...... my violin strings are still long enough and my violin chin rests also fit the 15" viola.

This notion will indeed attract some viola jokes and with all the nuts and bolts I will christian it "The Frankenstein Viola". (Strads have names, don't they?)

If and when I can make a decent recording, I will post it.

PS The new dynamics I mention includes a better vibrato with the liberated wrist.

By "restring" I mean keeping the viola G,D, and A and adding just a violin E.

For those who expressed some curiosity about the Frankenstein viola, I made a short audio file. My recording skills are almost non existent and I can hardly play anything because of just coming from years of violin. (Somebody moved the notes on the viola).
But it is what it is and the music shows a good range:

Thanks oliver! I will have to run this idea by my hubby and see if he's interested or if he wants to stick with the violin!

Ok, so back to that adjustable soundpost with a screwdriver adjustment.. From the looks of it, I'm guessing that the screw adjusts tension/pressure on a soundpost? Kind of like using a slightly longer or shorter post, but without having to go inside the instrument to change it?

Sorry to keep coming back to that, but it just looks like a very innovative concept, Oliver.

Sure, it may look a bit "Frankenstein" at the moment.. But if Frankenstein had been a real story, his notebooks would have been priceless to medical science and probably some other branches of science for the ideas in them and the discoveries he made to get his project to work. Ok, so his project ended up sort of a monster and not pretty to look at. But the things figured out in making a new idea work can always be made prettier or a little more "standard" later. The first chinrest for violin probably looked a bit rough. But it was a proof of concept.

I have many ideas but no more disposable violins and, I have to pay more attention to my violin/viola transition. It steals a lot of my concentration to avoid going in reverse back to violin mode. I think this will be simply a matter of practice (repetition) and then I won't be able to play the violin ! (I have a niece who from high school to college performed in classical groups on viola, violin, oboe and saxophone but the last two have real notes!)