(Asking for a friend)

In "Bill and Ted's Excellent Adventure", which I am assured is an accurate reflection of musical life and learning in the United States, the guitar shop has a prominent sign:

Transgressors are liable to be shunned.

Is there such a tune in the world of violin shops wherein one may not play it, lest one invites rolled eyes and opprobrium?

The last time I was in a music shop looking at violins was the spring of 1981, and I walked out with a 1/8-size instrument. I was in my early twenties, and 5'11" and of normal proportions. Was it something I said?

As regards violin shops - I have no specific answer, but I'd put money on it being ANY or ALL of the fiddle tunes I can currently play!

On reflection, no-one is going to suggest a likely tune for fear of contention.

Further, I think most would agree that there are better ways to assess a violin than rattling out a cheesy melody; in my short time as a player and learner I've discovered so much about how a violin works, what it should do and what sounds horrid. Some things can be fixed, others not so easily; a poorly-trimmed bridge would not necessarily put me off a fiddle, but odd buzzes from the corpus or a thin G string response would. Listening to the salesperson playing would give an audience perspective, and playing one's self gets the ear close to the action.

Doubtless there are many other things to look and listen for, and I expect these have been described in detail in other threads.

Oh, and @BillyG, it's entirely true. The shop was Hobgoblin in Crawley when they were just a single outlet, and after they were a shed in someone's garden.

For what it's worth, "Road to the Isles" has some delicious string crosses and might reveal some oddities in a fiddle's playability.

Maybe Monti's Czardas, because it's a favorite of intermediate violinists trying to sound impressive. But even that isn't anywhere near the same level of annoyance as Stairway to Heaven.

Besides, I don't think a violin shop is going to discourage any particular piece, because you have to test the entire range in order to try out a violin properly. The last time I went bow shopping, I played some three-octave scales, unaccompanied Bach, a couple Scottish fiddle tunes, and a bit of the Mozart Sinfonia Concertante.

On the other hand... 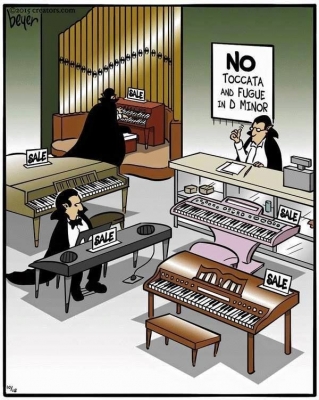 This has all prompted further thought.

I had presumed that my next violin would be purchased online, unseen and unplayed until I unpacked and tuned it up. That's an extraordinary act of faith, and I no longer look forward to it; I want to hear and feel before I buy. I got lucky (very) with my two present fiddles: the antique jumble-sale violin has an intimidatingly beautiful power and tone, and my home-made electric fiddle is one of my few 'right-first-time' complex projects (I am very, very pleased with it). I'm going to be a lot more critical over my next purchase, having reached the tipping point in my violin experience where I'm happy to soldier on and improve.

Thanks for the reassurance, @AndrewH, I'll shop for my next violin in person and play a few of my favourites on the offerings.