Heifetz's luthier
Hans Benning and his work for Jasha Heifetz

I just thought I had to share this gem.

Hans Benning serviced Heifetz's Guarneri (and his other instruments / bows). What a job. What a story.

Similar to that luthier, I am also amazed when examining my low shelf string instruments.  I find myself muttering, “what type of fevered mind would think that could be passed onto an unsuspecting public.”

Irv said
Similar to that luthier, I am also amazed when examining my low shelf string instruments.  I find myself muttering, “what type of fevered mind would think that could be passed onto an unsuspecting public.”

I guess it's the market's tolerance of what another violin forum calls a "violin-shaped object (VSO)". It's all about the money, below a certain threshold form and function just disappear under the plywood and white glue; but when you (the user) is up against stiff circumstances, you will play what you can get (or make). Some things cannot be brought up to a usable standard - the British Army say that "You cannot polish a t*rd". However:

I bought a cheap Chinese bow just after acquiring the antique fiddle, and when I re-haired it a few weeks ago I had to re-build it entirely: the producer (I shudder to call them a manufacturer, much less an achetier) had glued the wedges in, the grip was a length of cheap fishing line and the facing on the tip had split. It hangs in my laboratory at work and I play every morning with it; it's now a great bow beacuse I took some time over the rebuild. Onlly the stick, ferrule , frog, screw and slide are original, and even they have been fettled and finished. As you well know, junk can be transformed.

I spent the better part of last summer purchasing cheap second hand classical guitars to determine if consistent gems could be found undetected by the “guitar center” set.  I often spent more on shipment than product.  The amount of care and talent given by Japan craftsman in the 1970s to 1980s to inexpensive guitars was astounding to me.  Soviet block examples of the same period were also interesting, but to a lesser degree.

I repaired the also rans, provided new strings, and gifted them to my grand son and his 8 cousins last Christmas.  Great fun.

The only guitar project I have on-hand is a Tanglewood Falcon strat copy, stripped and ready for a rainy day. I've already junked the horrid whammy-bar tailpiece and the corroded machines.

I've historically shied away from classical guitars, the flat fretboards feel unnatural to me having been brought up on solids with their narrow, radiused fretboards. Since the last piece I learned on guitar before switching in binary fashion to violin was JS Bach's "Sheep May Safely Graze", this may change once I get a hankering for something tuned in fourths again.

Many of the classical guitars I purchased succumbed when they had to endure the stress of steel strings.  If I was lucky, I just had to reglue a lifted bridge.

The Japanese frequently did not embellish the fingerboard with any mother of pearl dots.  No clue why.  I do not think it was a cost consideration.

Epiphone made a Chet Akins electric classical guitar which looked interesting to me, but I was never able to procure one inexpensively.

I am also interested in the internal composite space frame structure of the Canadian designed and manufactured Garrison Guitar.  I do not have an example of one of those either, but I have a neck and frame meant as a sales sample.  I think a large 3d printer with properly selected feed material could likely build a similar space frame.

Garrison made a mandolin line so I guess a violin is possible from this technique.

A colleague at the saltmine has a Yamaha classical which has a permanent deformation from being steel-strung; the neck is straight, the neck joint is intact, the stringers inside the body all feel to be firmly glued, nothing appears wrong. It's just bent. It is an otherwise fine instrument, and I've instructed him to take 3 mm off the bottom of the bridge insert overall to compensate, and only to string it with nylon and take the strings down through the tie-off holes and back over rather than over the top. He wants to use the Martin knots, but I've advised timber-hitches. I've forbidden him to touch the nut.

@Peter et al.  I am well acquainted with that resulting bulge.  A combination, yet untried by me, of a “jld bridge doctor” (or a diy iteration of same) with a style of wire tailpiece popular with arch top guitars is my current repair idea. The former would reduce or eliminate existing top plate distortion and the latter would direct string tension to the tail block area.  The pictured object is obviously overkill for nylon strings, but you get the idea. 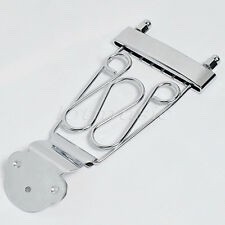 It's a good way to correct it, for sure, but the man has already taken the bridge insert to the linisher. He reports 3 mm at the sound-hole edge of the fretboard on the treble side. I haven't seen the result yet; he's even shyer about playing than I am.

I didn't see the guitar strung, so I couldn't judge if the top plate had been pulled up. If it had, and it were mine, I'd take the table off and sort out the lower bout bracing.