Side geared tuning pegs on a cello

Side geared tuning pegs on a cello
My most student level cello has side geared pegs. Not handy.

My first cello I bought has side geared shiny “brass” pegs. I really hate them. The owner put them on.

A major problem is that changing strings is a royal pain. I lay my cello on its back on my sofa to change the strings. As you can see from the photos, that puts the end of the peg into the sofa, making it hard to turn without lifting the cello up a bit. That is an issue. The other issue, concerning changing strings, is that I get confused which way to turn the peg to tighten or loosen a string. I broke a Perpetual A string when removing it because I was turning it the wrong way. Would not have been an issue except I was giving that used set to someone to try out. It is disorienting for me when playing if I have to tune when it is in the upright position, also.

Another issue with this type peg is that they make me have to use a longer end pin than I want to use because they are not comfortable above my shoulder if I don’t. Not sure why. Also, as I mentioned, when I turn them to tune, I keep turning them the wrong way. Well, this happens in its upright position too.

I would like to replace them with normal geared pegs that look like nom-geared pegs, but I would then have little holes where the screw are holding the brass plate in place, right? I don’t think there is anything wrong with the side of the pegbox. They were not installed due to a pegbox issue, it was an issue with the lady not being able to turn non-geared. But, are these things glued as well as screwed to the side of a peg box? If that is the case, there will not only be the holes from the little screws, there will be n issue with the finish under it. That would be more work and more money.
I am just trying to get ideas and thoughts. If I do anything, it won't be for a while. It os a student cello, and I am not sure I want to sink the money into it. 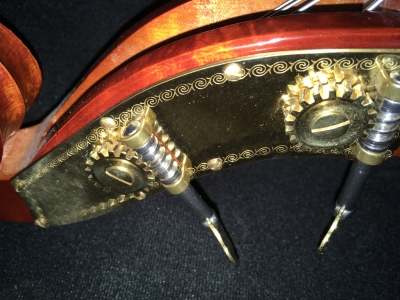 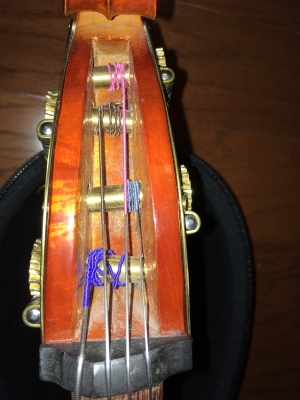 @Mouse and others.  Solving your problem is a little difficult for me because our brains are simply wired differently.  The worm gear tuners on your cello likely have a high reduction ratio of something like 12 turns to one, which means that it takes about 12 turns of the handle to move the peg around one revolution.  A similar ratio is customary for guitars.  This has advantages such as the ability to fine tune the string and gives you tremendous leverage so that tuning takes little muscular requirements.  The downside is the number of turns required for a string change.

A low cost solution would be to purchase an electric string winder with a socket intended for a bass guitar.  You should be able to procure one of those for less than $30.  You might be able to get away for even less if you already have an electric screw driver or similar (so you would then only need a tuner knob socket).

A half way measure is a manual spin winder.  Slightly less expensive but also less useful.

I doubt that glue was used in the mounting of your tuners, but switching to conventional pegs is going to make for an ugly pegbox.

By the way, having three complete wraps of the string around the peg is all that is necessary for adequate friction.  However, I have been known to cut a string end too short.  That renders the string useless.  I think that you will like an electric winder for your cello.

In regards the direction to turn the peg, the hole in the peg should always turn toward the scroll.

It is also not as convenient to fine tune. It is easier for me to do it by reaching down to fine tuners at the tailpiece up above my shoulders to the scroll end gears. I might get them. It doesn’t have them at the tailpiece. I am not all that concerned about the added weight they would add.

Just a word of warning, if you have a cello, I highly suggest you stay away from this type of geared peg. I will have to pay more attention next time.

@Mouse and others.  An attachment similar to the photo goes for $3 including shipping.  It is used in conjunction with an electric screw driver. 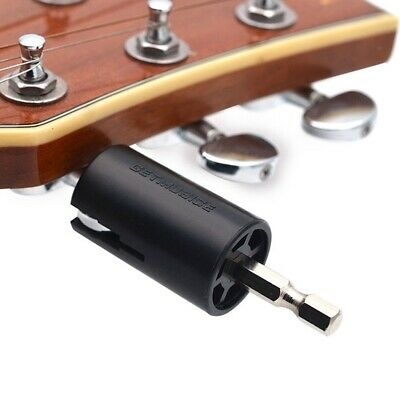 That is cool. I presume it can be dangerous as well. ROFL
Possibly many overtightened strings when not used properly.