Sticky Rosin Fingers, Be Gone!
Do you have an issue with rosin sticky seeping through the cotton cloth wrap?

How many of you have the rosin cakes that are attached to a cloth?  How many of you have noticed that after a while that stickiness from the rosin makes its way through the cotton cloth? Don’t know about you, but I have. For a while I wore a disposable vinyl glove on my left hand when rosining. This was because I noticed the back of the violin neck getting sticky. I had to clean it often. I tried washing my hands after rosining. That rosin is hard to wash off.

I have a solution. I have some cloth backed vinyl left over from a purse I made. I cut around the bottom of the cloth on the rosin so that it just covered the bottom. Then I replaced it with the vinyl with the lined side facing the rosin. The rosin cannot get through the vinyl. Attached is a photo showing step-by-step instructions on how to make yours. 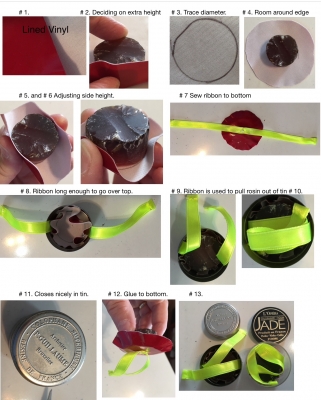 If you constantly rotate the rosin, you won't wear a groove in it.

Gordon Shumway said
If you constantly rotate the rosin, you won't wear a groove in it.

Yeah, I know, I say with a sigh! I keep forgetting. Have been bette about it lately.

Have yet to have that problem.

MoonShadows said
Have yet to have that problem.

WELL rosin up that bow and lets play..

That's so neat, thank you for sharing.

I've to say I'm impressed by that rosin groove. You must be playing a lot. My rosin have still some of the glaze on top and I've been using it for 9 months or so.

@HP, yes, I play a lot lot. Can’t tell by my playing. That rosin is used on my violin, viola and cello bows, although I had to get the Kaplan Premium with Case-Dark from Fiddlershop this Summer because, with my window AC units, I couldn’t keep up as much as I would like with the extremely hot Summer. I was not going to lower the temp desired on the AC units and have them turn on more often, so I changed rosin, This is the first Summer with these instruments, so it might be like this even with the normal Summer temps. That rosin won’t need my vinyl because, like Fiddlerman Rosin, it has its own handy case instead of a cloth wrap. They are different style cases, but cases, none the less.

But, I do play them a lot. It makes my own little corner of the world and I get involved and lost in it when playing those instruments. If strictly playing time made you better, I would be a virtuoso. Unfortunately, it takes knowledge and an ability that requires training and practice. Time playing is a big part, it is the other things that give me issues

I cut the vinyl down a little if the vinyl channel that is parallel with the bow when I hold it rubs the bow hair. It is as short as I will make it. It isn’t going to hit the bow hair any more. Since I learned to rotate, I am not getting grooves on other rosins. It is easy enough with the vinyl holder, I just hold it in a different place. The vinyl is grippy, even though it looks slippery with the shine, so it does not even try to fall out of my hands.

I'm using the Holstein rosin in the magnetic box and haven't had any problem with rosin "creep", but I've thought about getting one of the cloth wrapped rosins and didn't realize this was even a problem.

@bob, if you don’t even sew with a needle and thread, you can do this without the attached ribbon. It makes it easier to pull out of the rosin case. I cut the original cloth wrap off around the bottom to have something to glue the lining side of the vinyl to. But, the gluing is not necessary, either. Like the ribbon, keeps it all in place. If rosin was used up quickly, I wouldn’t have bothered actually affixing it to the cake, but one cake lasts a long time.

As I mentioned, I have yet to have this problem, but I would 2nd Bob's suggestion. I think cid came up with a very creative and ingenious way to solve this problem.

I'm using the Holstein rosin in the magnetic box and haven't had any problem with rosin "creep", but I've thought about getting one of the cloth wrapped rosins and didn't realize this was even a problem.

Absolutely. That is why I have you guys to help me out. Thanks for reminding me. 😁

MoonShadows said
.......but I would 2nd Bob's suggestion. I think cid came up with a very creative and ingenious way to solve this problem.