The Traveling Fiddle, Recordings and Me

The Traveling Fiddle, Recordings and Me

Well now. I received the Travelling Fiddle. I planned to go across the mountains today for work and stop at one of my favorite stopping places and record a music-like rendition of something or other. The weather man said to look for a great day, high in the upper 50's, no rain, no snow, sunshine, a beautiful day really.

It was so foggy, I stopped about 1/4 the way across the pass and came back. There were several accidents and cars in ditches. The temp peaked out at about 40 and was about 38 when I stopped at a lower elevation rest stop. So, I didn't get the recording I wanted, but I did do one. It was hard to keep the fiddle in tune and I was playing with fingerless gloves. I did draw a small crowd of 5 people, 2 dogs, a crow that was laughing at me ( I know it was, it kept going " KaH-haha")

Now, the quality is not good, but I still wish to post it. What is a decent non-expensive video software to just edit out the lead and some of the ending? Also, the last video I posted was about 2 years ago. I added it to youtube, then posted the link directly to the forum page. Is there another way other then youtube to accomplish the same result?

That is hilarious.... Well maybe not to you.

Sorry for the lying weatherman.

I don't know about cheap software on a PC. With a Mac you have iMovie which is included and great.
The best way to post a video here is as you did a couple of years ago. You can make it unlisted if you want to have it mainly for the forum and not so that it shows up on random searches etc.....
Look forward to seeing the video.

Jeez, sounds like the weather here lol. Not in colorado are you?

Ok I downloaded Microsoft Windows Movie Maker for free. Pretty simple. I was even able to rotate the move since the itouch loves to live on the left 90 degree tilt.  I'll most assuredly download the video tomorrow. It took longer then I thought to get this working. I just have to do some minor editing so you don't see me pleading with the police officer and begging to not give me the ticket for noise pollution

I did find my youtube registration login/pw so that should be easy enough too.

@Tyberius - Loving the story so far !   "noise pollution" LOL ! Get that vid posted !

Ok finally, here it is.   There are 2 mistakes during play.

I make so many, I hardly even notice.

It was dark and dreaery. Cold too if I might add. Yes, I am wearing fingerless gloves and playing. Nothing stops me. MUahahahah, well, except that pesky crow and possibly the police officer

Nice work!!! Thanks for the vid, what is that tune called?

I like the idea of just carrying the fiddle with you, stopping where-ever and doing an impromptu practice !  Great stuff !

Clap clap clap.  Good job.  That slide was something I hadn't heard in OJC.  I really liked that little ornamenty trill you did though.

@Georganne  and @risk  This one is my own working. I took the basic-BASIC tune "Old Joe Clark" and just improvised until I got something I really just liked. So, I started playing with slides, trills, stops, even a little string plucking at the end. Then on the last iteration, I threw in some droning on the A string. The gloves didn't help at all, but I can always say, yea, it would have been better BUT..

It was under 40 degrees outside. The strings just wouldn't stay in tune. The D and the A pegs kept slipping. I had no peg grease so it was a bit difficult to play between tunings. I'm getting pretty good at tuning on the fly.

@Bill , I purchased a cheapo violin on ebay for $30US. It came with an even cheaper bow I still use with it. At its maximum screw turning, the hairs barely lift off the bow. I don't think the prior owner ever loosened it. It was tight when it arrived. I keep that violin/bow in my work van and there it stays in a case that allows all the cold, hot and moisture in on a whim. Its been out there now over a year and plays just as good as it did when it arrived (LOL). It is nice to have and fun to play.

The point when I looked up quick to my right, that's when the cop showed up. I guess he thought I was causing problems or a drug dealer or something. At the end I went over and talked to him and the 4 others. That happens a lot. people just see you having a great time and come over to listen. I ended up playing 3 tunes then. It was getting too cold to continue. The police officer said he's seen a lot of things at rest stops in his time, but a fiddler is the first.  I hear that a lot too.

Thanks for sharing!!! Way to go on Old Joe Clark.

Thank you Tyberius for the video.  Very cool!!

I am getting so excited about the Traveller coming to visit me.  I am hoping the weather clears up before he/she arrives.  It is very very cold right now - school closings this week because of kids waiting for buses in the -17 wind chill!!  Brrr!!

How awesome.  Love it Tyberius.   So nicely done.

Here is my Daughter playing the Traveler. She's 13 and has been playing for a few years.  I hope you all enjoy this as much as I enjoy watching her play. 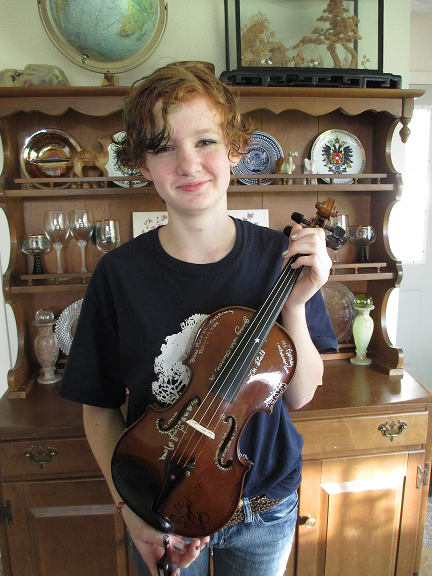 Fantastic. Thanks for the performance Ty's daughter.

She's my inspiration when the fiddle world starts to crash down and you start to lose the drive and motivation. She's always encouraging and uplifting in getting me to keep moving forward.

Thank you for all the kind words. She also expressed her appreciation in what everyone has said here.