I'm a beginner who recently recently went on holidays and was away from my instrument as a result. In order to try and keep up my motivation (and learn a bit more about violin construction!) I read Stradivarius: Five violins, one cello and a genius while I was away. This got me thinking - are there any other books or other entertainment that people on Fiddlerman.com love?

Would love to hear your recommendations!

Great post.  Looking forward to hearing what others say, as I love to read and this subject matter is of great interest.

However...  I cannot help but mention one of my favorite movies, for its violin related entertainment value.  @RedViolin do I even need to mention it?  It is your namesake! 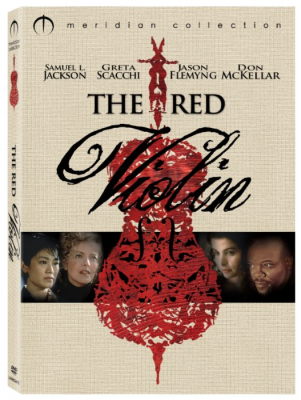 "The Devil's Violinist" with David Garrett is pretty entertaining.  MOstly fiction, but it has some good playing in it.

Though if you prefer more fact and less fiction about Paganini, then "Paganini's Daemon: A Most Enduring Legend" might be more the thing.  It's a BBC documentary, and available to watch or download from the Internet Archive (www.archive.org) here:

Since you mentioned Nodame Cantabile, I would suggest La Corda d'Oro aka Kiniro no Corda (only watched the anime years ago.)  The first season it's about a school that has two teaching departments a normal and the music one and a girl from the normal teaching has been selected to enter the music competition without knowing nothing about violin. The second, with a whole new group of characters focus on the national concour. It's not perfect,a bit too girly, but the whole series have a beautiful message, features several classical music pieces played by the characters and sure motivates you to play violin with your heart

Heheh @micra, would you believe that I only heard of the film "Red Violin" after I'd already chosen it as my screen name? How embarrassing...!

I will have to get around to watching it!

Thanks for your recommendations also @DanielB, I will certainly be making use of that link.

And for yours @ElisaDalViolin, that sounds like an interesting series. I know what you mean about some anime being overly girly etc, I have a bit of practice at ignoring that though

This could be another great idea for a blog.

Remember I spend my days with preschoolers - Zin! Zin! a Violin.

Music from the Heart http://en.wikipedia.org/wiki/M....._the_Heart

I have not yet seen - The Return of the Violin https://www.youtube.com/watch?.....ZRS3f4Ir8Q

What a great thread!

I love the Red Violin.    I  also loved the Devil's Violinist. (there are a lot of you tubes of David Garrett playing Caprice 24)

I will watch a movie just for a scene with a violin.  I recently watched Master and Commander  and loved the violin scenes.

Hilary Hahn plays the violin sound track for The Village.  I have never seen the movie but I completely adore the works.   One of my violin buddies plays this live for me when we jam.

I've just seen the first couple of minutes of The Return of the Violin and am hooked! Thanks @Schaick

And @coolpinkone too, I'll have to check that out!

This one sounds really cool!!

Those are cute books @Schaick!

@DanielB, I finished watching the Paganini documentary. What a sad story, that he remains (in)famous for the myth of having sold his soul to the devil (and his friends struggled to find a final resting place for his remains as a result) when the truth behind his talent appears to have been dedication and even what we would consider an abusively harsh upbringing rather than any supernatural intervention. I suppose the positive message I take from this is that there probably are very few (if any) supremely talented musicians who just picked up an instrument and play perfectly and effortlessly, but that, as with anything, there is much effort behind it.

I'm not sure if blogs count as 'entertainment' (to me, at least some of them are entertaining!), but here is an interesting Paganini-themed one: https://vaughnvsviolin.wordpre.....m/2011/02/

@RedViolin: Yeah, it is kinda sad, but pretty typical of people wanting to believe there was some "trick" to an artists great skill, other than lots of hard work.  We would think of his upbringing as maybe harsh by today's standards.. But for back then it was probably pretty typical of anyone whose parents hoped their kid would have a better life than they did.  Musical instruments weren't cheap, and a lot of kids his age would have been working in factories, mines or other hard and dangerous places, while he got to sit and work on his music.  Whatever else we can say about his father, it is obvious he believed in his son enough to put the money on the line and give him the time to work and practice enough to become great.

The work paid off though.  In one music marketing seminar I took, Paganini was listed as the first "superstar" performer.  He could go anywhere and pack out any house, his name was known by everyone, and no matter what other great performer of his time that he split a gig with, he was always the headliner.  He was a great self-promoter and invented a lot of the tricks of the trade used by rock and pop performers to this day.

He was a legend in his own time.  But the downside to that was that people were willing to believe the most outlandish stories about him, and that didn't always make his life (or getting buried afterwards) easier.

I have been Watching Outlander - A show on Starz.   I have been getting to hear and see bits of fiddling.  I really like those parts.   Not to mention that the theme song is a female version of Skye Boat song.

The show is cool... it is leading up to the Jacobite Rebellion... (which the Skye Boat) song is about.  So my vioin and history geek side comes out.

You make some good points @DanielB about Paganini and his upbringing, and the ways he managed to use his reputation to his advantage. I totally agree that life was very different back then (and I am sure there are many parents similarly pushing their kids today). I just think it is quite tragic that even today his name his tainted, and that, more generally, people don't want to see talent as a result of hard work, as you point out.

@coolpinkone thanks for reminding me of Outlander - a friend had recommended this to me, and I should check it out. By the way, I took a look at the blog listed on your profile - it's great!!!

@RedViolin thank you for the compliments on the blog.  It feels so neglected.  I used to run much more busy book and craft blogs.  Thank you for looking.

I do like the Outlander series and the Skye Boat song.

I think it has been mentioned But the Show Master and Commander has a few good violin scenes.