Who is this violinist?

New Game. Who is this violinist? Hint: maybe my all time favorite .... LOL, I know that is no help at all.
More hints to come if noone can figure it out. 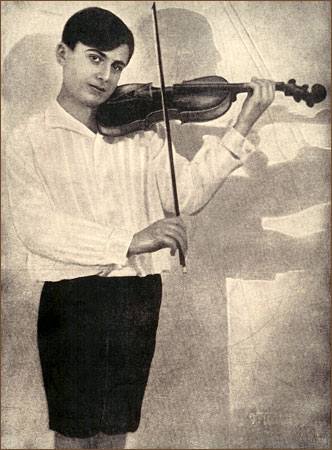 I love games! It looks a bit like a young Christian Ferras.

Is that a young... Jascha Heifetz? I've only seen pics of him in his later years but the look of the eyes is there.

A child prodigy, he began making phonograph recordings in Russia when he was only 9 years old. These early recordings are quite rare. On October 27, 1917, at the age of 16 he made his NYC debut in Carnegie Hall.  Shortly thereafter he began recording for the Victor Talking Machine Company and later RCA Victor. The Judaica Sound Archives at Florida Atlantic University Libraries has created four audio albums consisting of 32 of these Victor recordings produced between 1917 and 1922.

That's not a young Itzhak Perlman, either, I don't think.

Good guesses but none right so far. The closest was Kevin M - ROFLMAO
I'll give some hints tomorrow if noone gets it.

I has to be a young Yehudi!

I think Terry is right. Looks like it could be Yehudi Menuhin.

Headcheese when he had hair?

I think I am on the wrong track - I don't think the membership is old enough for this style of photo...

too bad I don't know any famous violinists!

Good try but not Yehudi Menuhin

Time for a new hint.
A citizen of Mexico - Now you guys are even more confused

Or is he more famous as a composer?

TerryT said
I has to be a young Yehudi!

LOL, Terry.... evidently you're not old enough to remember when men and boys wore "knickers"

TerryT said
I has to be a young Yehudi!

LOL, Terry.... evidently you're not old enough to remember when men and boys wore "knickers"

Bravo Kevin. Have you been doing some Google searching?
It was the Mexican citizen thing wasn't it.

Your turn to post a picture. That's your reward for winning.

Well done Kevin.
This is a great, educational post, if we can keep it going.