The Sons of Liberty Featured in Crooked Road Series

Just thought if anyone lives in this area, and likes early American fiddle music, you might be interested in this concert.

The Crooked Road: Virginia’s Heritage Music Trail presents The Sons of Liberty in concert on Thursday, August 8th from 6:30 to 8:00 p.m. at the Southwest Virginia Cultural Center & Marketplace (formerly Heartwood) in Abingdon, VA. This concert is part of The Crooked Road Music Series. 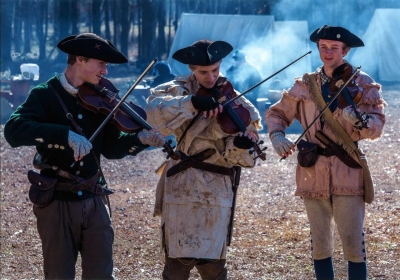 The Sons of Liberty are Daniel, Noah, and Joshua Smith. With a ten-year background in classical violin performance, the brothers began reenacting and playing the music of the eighteenth century in 2014. The uniqueness of their sound is enriched by their dynamic arrangements of traditional American songs. The Sons of Liberty are frequently featured at state and national parks across the southeast, and they have also performed at Thomas Jefferson’s Poplar Forest, Colonial Williamsburg, the Barter Theatre, and George Washington’s Mount Vernon. They are also members of the Symphony of the Mountains Youth Orchestra.

@MoonShadows thanks!  Raid on Martin's station video was great.  A little swallowtail!   Nice.

Id go if was closer.  Maybe someone will book them down here soon.

I would really like to see them play live at one of their performances, but like you, it would be quite a hike for me.

@ABitRusty You can also check out there upcoming events to see if any are within reasonable driving distance for you.

Great! If you go, I'll expect a full report, and if you want to take some pics (or a video) I will post them on their Facebook page.