Hey everyone! What issues might poor bridge fit cause?  I noticed today that my violin's bridge has contact at only 1 corner of each of its feet, (only 2 teensy edges of contact  a total for it) and daylight can be seen between the rest of each foot and the top of the violin.  It also has a comparatively high action, so I'm wondering if some of its issues with the falling bridge/slipping pegs/snapping strings would be coming from this? Thanks for any info!

Bridge - Have you checked to make sure the bridge is standing at a 90° angle when you play? If not, then that may be why it's falling. As for the string snapping ...where is it breaking and what string/s/ is it? For the high action, your nut may be cut too high causing the action to be too high.

Slipping Pegs - I'm not sure that a bridge would be a result of this, so maybe try some peg drops. These may keep the pegs from slipping if it's not related to another issue.

If the two edges are in front (towards the scroll) then Ada probably nailed it. As you have tuned it, the top of the bridge gets pulled forward, and it's tipped. Check that it's straight up at 90 degrees after tuning and that problem should be solved. What happens is that the strings are under enough tension to grab the bridge pretty well, but not quite up to the proper note yet.

By the way, if you go to adjust that and your bridge suddenly falls flat (like mine did when I went to make the same check

), don't panic. Just loosen the strings some to give yourself some slack, put the bridge back in place (maybe tilted slightly back to account for the tightening you're about to do) and retighten the strings.

If the two places the bridge is touching are in the back and it's tilted back, similar logic applies, you just straighten it up.  By the way, the back side (toward the end pin) should be at 90 degrees to the face and straight.  The front side (the one on the scroll side) should be at a slight angle sloping away from the scroll (ie thicker at the bottom), but also straight.

If the bridge is curved in either direction, it's under a stress it's not designed for - you want to fix that. Use lots of fingers to minimize the chance of it suddenly slipping out on you.

If the spots where it is touching don't seem to have a pattern...  I started to make some guesses, but really, the best thing would be to take pictures from several angles and post those. Make sure they show some of the "daylight" and at least one is from straight to the side of the bridge and shows the angle it makes with the face.

Ada already answered about the pegs, so I won't comment on that.

Oh, I forgot the other thing I was going to say on that. The bridge is what transmits the vibrational energy from the strings to the face of the instrument, which then goes to the sound post, then to the back and eventually the whole system turns it into sound.

So poor contact by your bridge is going to affect your sound (generally not in good ways). I'll predict that getting it fitted right will make your sound richer, but my understanding of the mechanics of violin acoustics is not even in its infancy, it's pre-natal, about 2nd trimester.

Generally, a thin, light bridge give a brighter, clearer sound, but also a less rich one. A heavier, thicker bridge gives a warmer, richer sound, but sometimes also a muddier one.  You have the energy transmission capability of a gossamer thin one, with the mass of a normal one.  It may not affect the tone much after all, just make it project a lot more. I'll be interested to hear what affect fixing it had, once you get that done.

Thank you so much for all of the information, Adaleona and Charles!

Adaleona: The strings are mostly snapping up at the peg -- two brand new ones and an old one. Always the G and E pegs.  The colored wrap at the end of a new e string also got shredded off, but I'm not sure how that happened and I just try to leave E alone for now xD I compared the nut for the Matthias with my Fiddlerman OB1, and the OB1's is much lower, so I'm assuming that the Matthias has a higher action because of that.

Charles-- haha, definitely not using a cello bridge! (: I've included a couple pictures below of the bridge at its current position.  I couldn't get many nice pictures of the "daylight" because the sun wasn't coming in my window as nicely​ as it was yesterday, when I noticed the issue.  I'll see what tomorrow brings, but they are tipping towards the fingerboard. It's not as pronounced as it is when it's about to fall , though. (It's fallen two or three times, once even taking the tailpiece with it, when I noticed it tipping  and went to fix it...and I think those events have taken about 10 years off of my life!) 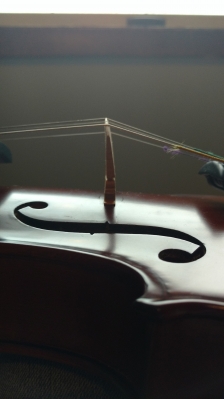 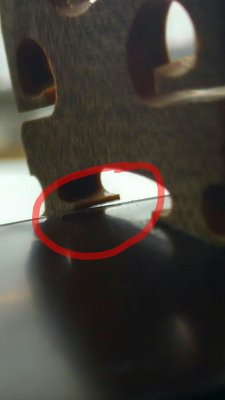 Right off the bat I can see your bridge is either put on backwards and warped, or put on right but warped horribly. This would need to be replaced as it can cause damage to the instrument if it were to snap. It also isn't fit right, which is obvious by the gap in between the top plate and the bridge feet.

The issue with the snapping strings may be linked to sharp edges on the nut, so I suggest to have that fixed too. For the color winding on the strings...I don't think that's important, so I wouldn't worry about it.

One last note: When you're tuning and/or changing strings always check the bridge to make sure it won't tip. If it's leaning, pull it back into place gently.

That bridge is warping because it was permitted to lean forward like that. Bridges get pulled forward towards the pegs when tuning and should be periodically straightened. I make the adjustment quite often. You need to straighten it by pulling the top part of the bridge back very carefully and it may hold up for quite a while. If you don't do anything it will continue to warp until it breaks. An option to straighten it out would be to put it in boiling water then press it in something if it doesn't automatically straighten out after the boiling hot water. Don't put it back until it's completely dry.

Okay, that's what I was afraid of.  Thanks for the info -- and I'll be keeping a closer eye on the bridge from now on!

You can tell whether the bridge is on forwards or backwards by looking for writing on it. If the writing is on the side towards the tailpiece, it's oriented correctly, and Ada's second scenario applies - it's warped horribly.   If that's the case, if it were me, I'd play the OB1 for the next several days and try Pierre's boiling water trick (or get a luthier to carve you a new one).

If it's on backwards, loosen the strings up a good bit. Check if for warp. If it seems straight, put it in the right way and see if the feet fit flat. If the do, tighten the strings partway, reposition it, tighten them some more, reposition it, rinse and repeat. When you get a few notes short of normal tuning you probably won't need to reposition it any more, but be sure to double-check it when you're done. Use lots of fingers (fingertips, really) especially up near the strings. That will make it a lot less likely that it will slip or otherwise get away from you.

If it's badly warped and you can't get it out, the only fix is to get a new bridge made. The good news is that as violin repairs go, that's fairly quick and cheap.

Yeah, Ada's observation is correct in that it's badly warped -- it's placed correctly. I'll be trying the boiling water method today to see if it helps; fingers crossed!