I just received a cardboard box containing a circa 1900 hopf violin.  The box rattled like a bag of wood blocks (generally not a good sign).  The contents of the box was amazing.  The work of an old timer that I have to admire.

The rattle was caused by the case compartment being filled with wood twigs of various colors, evidently for sound post experiments.  The compartment also contained what is likely one of the first bars of Hill rosin in a chamois wrapper with a stitched cloth label.  Hill gave you a lot of rosin back in the day.  It had four sound posts of various diameters.  An ivory piano key veneer.  A two part violin peg made so the knob could be removed once the string tone was adjusted.  And lastly three violin bridges (two fitted with a wide ivory bridge crown insert and one fitted with an ebony bridge crown insert).  Never seen anything like that before.

A modification of note on the violin is that a piece of ivory was sandwiched between the fingerboard and a vestigial ebony nut.  Promise a picture tomorrow.  It is actually very attractive.

On first appearance, there looked to be a piece of replacement wood on the lower bout treble side of the front plate.  On closer inspection, an identical wedge of wood was used on the bass side as well.  I surmise that a wood flaw was found during construction and the bookmatched patches were added to save the wood.  No cracks were noted so it obviously worked.  It is a very light violin and the fingerboard is thin (and thankfully no fingernail holes).  There is a considerable amount of pegbox wear and I made need to install bushings.  The wood is very attractive and the French polish finish is old but pristine.  The bow frog looks like it has been in a fire.  Pictures follow. 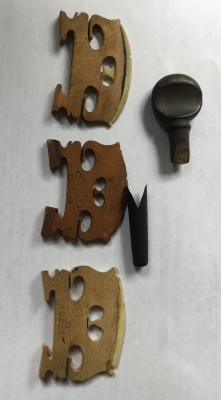 i get a kick out of stuff like this

Yes, that is very interesting. Thanks for sharing that Irv.

@steveduf and others.  Promised pictures of ivory nut.  He used two pieces of laminated ivory.  Only a vestigial portion of the original ebony nut remains to support ivory. 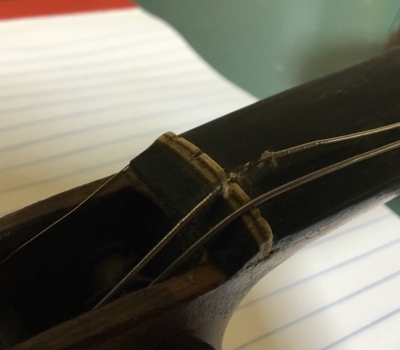 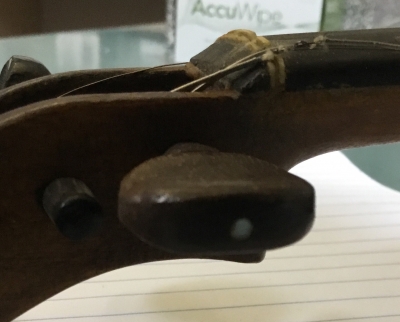 Promised pictures of bookmatched front plate wedges.  They were so well done that likely difficult to see.  Look for slight depression at wedge tip. 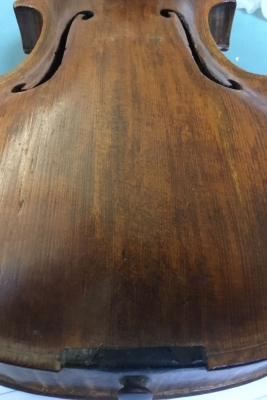 That was some good work joining the pieces together.