Is the bridge curvature supposed to match the fingerboard curvature?

Is the bridge curvature supposed to match the fingerboard curvature?

I have been curious about this issue ever since I bought my violin.  My bridge curves sharply downward on the E string side, not matching the curvature of the fingerboard. I have read on other forums that the two curvatures should match.  I don't know for sure, so I'm asking the question here.  I have attached some pics of my violin, taken from the button end (looking towards the peg box), that shows the tailpiece, bridge and fingerboard, and that illustrates the curvature of each.  I also think that the holes in the bridge, on the E string side, were not carved correctly.  They appear to be being smashed down by the E string.  That's been the case since I bought the violin, but I didn't notice it right away.

My question really is, after looking at the pics, what are y'all's opinions on my bridge.  I was thinking of ordering a nice blank and trying to make it fit.  It's a good DIY project anyway.  I don't know "brand" it is, but it looks to be a decent bridge.  Were I to order a blank and not cut it correctly myself, I could always replace it with the original. No one would be the wiser

I really trust y'all's opinion, so please take a look at my pics and let me know if what I have is OK. 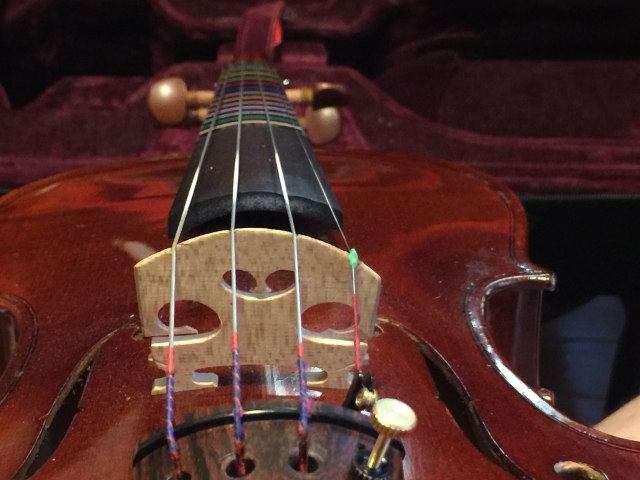 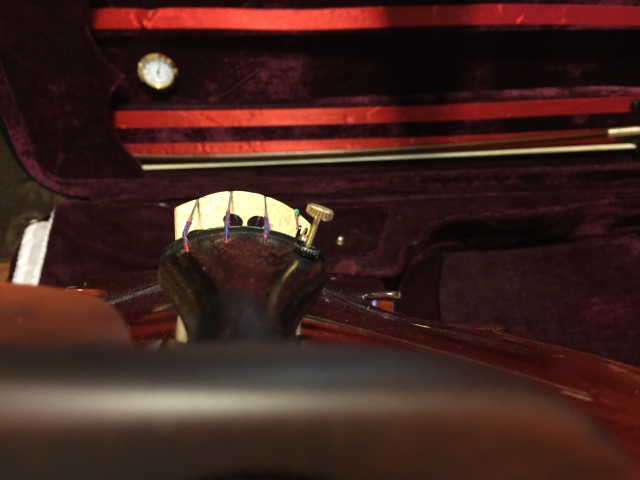 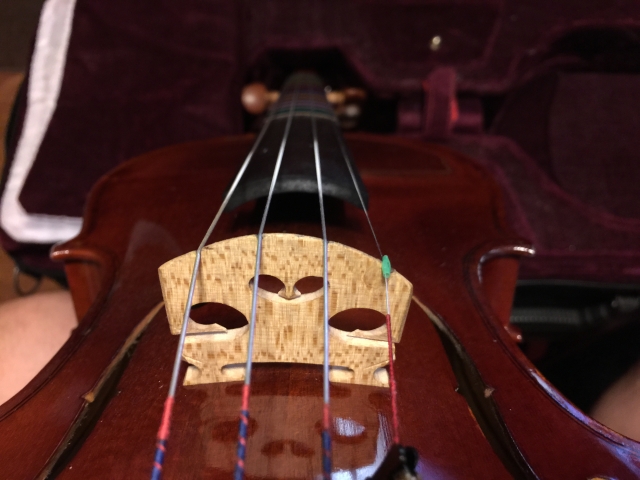 it looks OK to me. The E String end is a bit lower than the G String end, from what I'm told, and my violin looks almost exactly the same. Nothing to worry about.

If you feel like getting a new bridge and trying to fit it, I'd say go for it. As you said, it's a nice DIY  project and can help you learn how to properly prepare a bridge for your violin, in case something goes wrong with the bridge you currently use.

It doesn't necessarily have to match the fingerboard. The distance over the fingerboard should be relative to the curve on the bridge but not exactly the same. If it works well for you I would not touch it. From what I can see on the pictures, the curve is OK. I've seen plenty of bridges with less curve.

For the most part the e string height in the ready to play position is usally about 1 to 1-1/2mm from the fingerboard, the G string is usually around 3-4.5mm height. The curve of a standard 4/4 (if there is such a thing) bridge top is found to be about 42mm radius. The curved line of that radius will intersect the imaginary point where the string will be held above the fingerboard at the required height. The center two strings will then be at the correct height as well if that curve is followed. If the bridge intersects a line drawn parallel with the fingerboard and the top of bridge is cut to give the string height then the bridge is correctly made. If it doesn't, it can be sanded down to obtain that height.

You can see all about it in this pdf I have made for the group. Download it here:

There's different ways a bridge can be curved.  Like some fiddlers who use a lot of chords and doublestops may want a slightly flatter bridge, for example.

The most standard (so far as I know) is a 42 mm regular curve, but there are others that are used that are called "avant garde" where it isn't a perfectly regular circular curve.  Usually from what I've seen, those are a bit flatter on the side of the E string and a bit "curvier" on the G side.

But the differences we're talking about are really small.  One or two mm, maybe.

I think what you're seeing there is, as others have mentioned, probably a 42 mm regular curve (meaning you can make it by using a compass and ruler to draw a 42 mm circle and using a piece of that as a template) that is just tilted a little to allow a bit more space on the G string side, because the G string has a wider range of movement when vibrating and needs the extra mm or so of clearance compared to the E string, so it doesn't "buzz".

But if you want to experiment, bridges don't cost that much.  So long as you leave your original bridge alone, you can always switch back to it if you don't like how your experiments come out.

I would suggest buying or making a bridge jack, though.  That's a little device that can fit under the strings near the bridge and when it is tightened, it raises the strings just a little so you can slide the bridge out and back in and they take a lot of time and annoyance out of your experiments.  They aren't real expensive, either.  Or you can make your own.

Doesn't have to be fancy.  My home-made jack isn't, and it works fine.

Thanks for all the responses.  It gets a little confusing at time, as things like bridge curvatures are both highly individual and contested by any of an increasing number of sides.  As y'all have mentioned, a flatter bridge makes it easier to play double stops, but I didn't know if there was any kind of standard from which to start.  I've seen lots of pictures of violins people are selling, but I don't know if the bridge has actually been wet up.  Most of those appear to have the same curvature as the fingerboard.  I understand that the G string needs more room to vibrate, but failed to understand that the curve could be slightly rotated to allow for same.

I got lots of good information here, and I wish to thank y'all again.  I learn more and more about not only how to play the violin, but how to modify and maintain it as well, on this forum.  I may still end up buying a blank, as they're really not expensive at all, knowing that were I to screw that one up, I would still have my original.  It seems the more I learn about the violin, the more I that remains to be learned.  Thank you for your patience with me, although to be fair, I must warn you that I will be here for a long while yet  hahaha

IMAO, a flatter bridge does not make it easier to play double stops. It makes it easier perhaps to play 3 notes at a time and to switch quickly between double stops involving different string combinations, for example going from D and A double stops to A and E double stops. Playing two strings at a time is the same with any curve on your bridge. Having more curve perhaps helps you not accidentally play a third by accident. I guess there are advantages of either theology. The thought is that "fiddlers" have flatter bridges but I've seen great fiddlers with both.