I thought it looked handy, too. That's why I thought I would share it.

The luthier just set it where (I guess) he sets soundposts. I completely forgot about asking him about other placements.

I completely understand how you feel.  My violin is so valuable to me, any damage to it would devastate me. But it does happen.

You did the right thing having your luthier take it from here.

I would not attempt any repairs on my violin.  I do like the idea of getting an inexpensive instrument on which to learn and practice repairs you want to learn to do yourself, such as bridge and soundpost setting and tailpiece replacement or adjustment.

It may be painful and frustrating to wait for a couple days to repair your instrument, but it is time well spent.  I bet you won't do this again any time soon!

I truly do sympathize with you.

Say hi to Michael Montero next time from me.

Fiddlerman said
Say hi to Michael Montero next time from me. 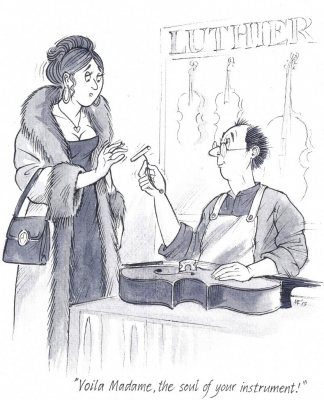 I really like this joke. It's a shame it's so esoteric!

@Gordon Shumway Yes, I agree. A month or so ago, I wouldn't have had the slightest idea why it was humorous. 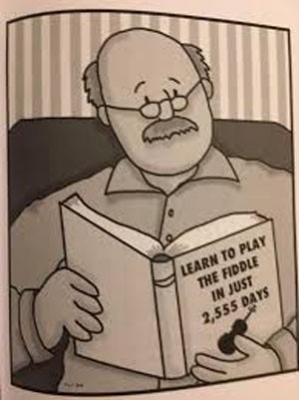 I wonder why they didn't simply go for 3,000 days. That book's title is part of a series, though, but I can't remember the original timescale for them. There's Learn to Play the Piano in Just 6 Weeks, so they could have gone for 600 weeks.

I think the 2555 is pointing to in 7 years youll get the crown ( violin mastering ) sort of a spiritual nod I think. 😊

Hey, MoonShadows, hope you're OK with this thread becoming the place to fess up to fallen sound posts.

This one was truly my doing as I was messing around with tailgut length and moving the bridge around so I couldn't resist giving my sound post a little tap with this:

After a few taps, I learned what a loose sound post rattling around inside a violin sounds like. Sigh. On the bright side, when I saw MoonShadows started this thread, I bought this little guy realizing that, being unable to resist tinkering, for me it was a question of when and not if.