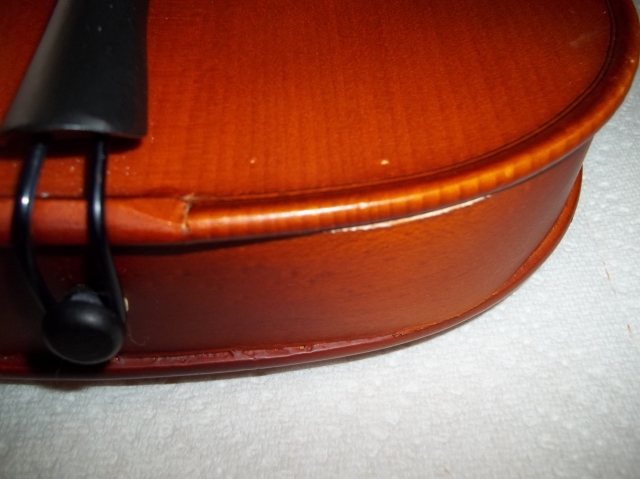 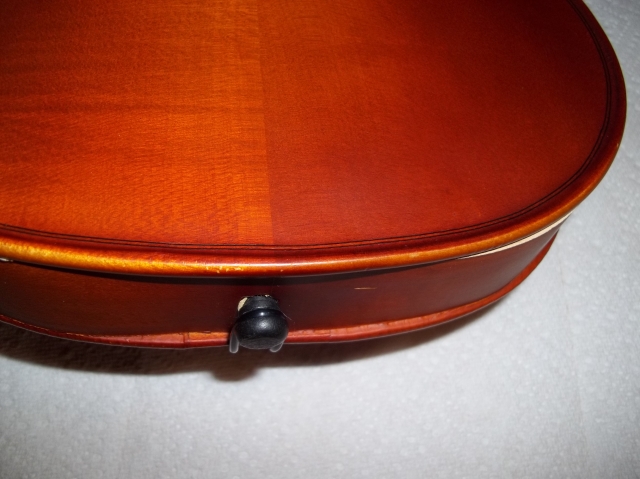 Ok, now what looks odd to me is how the ribs are bowed out on both sides of the end pin.  Almost as if the wood of the ribs expanded significantly for some reason.

This was my old Mendini MV-300 that I gave to a friend and he's had it for a couple of years now.  The problem has only recently been noted, but I don't know how much of an inspection the instrument gets when he takes it out to play.

Humidity has been very low the past couple of weeks, but since all I know is when the damage was noticed.  But since it might have happened before then and not been noticed, I can't be sure if the dryness definitely caused it.

The wood of the ribs is not flimsy or overly flexible at those points.  Applying even quite a bit of thumb pressure doesn't push the wood back into place.  With that in mind, I'm a bit leery of contriving some sort of clamp to force them back into place and just re-gluing the seams.  The amount of pressure it would take could damage the wood and even with hot hide glue, it likely would just pop open again soon, if not immediately.

Figured I'd put up the pics here and ask if anyone has seen anything similar.

At present, I have the instrument in it's case with a humidifier and the sound post removed, in case the soundpost being too tight may have been forcing the center of the plates apart enough to cause some warping of them.   The sound post was very tight, even with the strings entirely loosened.

My antique violin had seams like these, except they were bigger. We got them fixed by a violin luther though. I played on the violin a couple years but took it back to the luther to get the bridge replaced, and he then informed me that the glue is not holding in some places and those will turn into seams. So he re-glued the violin for me. So I am guessing that this is not terribly uncommon, especially among older violins. My violin is over 100 years old though... I am sure it has a lot to do with humidity as well.

It is not hard to fix. You could try gluing it yourself, but you may ruin it. If the violin is worth it, take it to a luther and get it fixed. It is pricey though, expect to pay 100-300$ depending on the luther.

Mendini MV-300s list around 70$ brand new, currently.  So a luthier repair would not be likely even if there happened to be one nearby.

If the glue had simply come loose, it would be an obvious repair, but the ribs have "sprung out" enough that simply gluing the seams would be difficult if not impossible as they are, and I doubt it would hold.  The pictures may not show the problem well enough.

But thanks for the thoughts, Jerusha77.

Or as if the top has shrunk?

My Berty had the same issue.  Luthier was able to secure the seam so that there is a bit of an edge but not the same depth of edge as the other side of the violin.  Berty does have a rib profile similar to this ) on both sides of the end button.

First: thank you for posting these pics.  It is helpful.
Second:It does make sense that it came apart there, as it is the weakest glued area on that rib.  After cleaning the area, re-gluing makes sense to me.

I have only one experience with a 300 and that was a new 1/2 size.  The sound post was "glued" to the top and bottom with some type of "stuff".  I made those two words special, because I don't know what the material was, but it sanded off easily.  But of course, I assume you had moved the sound post when you were working on this violin.
Whatever your decision, your journey on this will be interesting to me.

@Schaick: Yeah, the top having shrunk or possibly warped from the sound post having been perhaps too tight are a couple of possibilities I was thinking could cause it.  It would make more sense for the spruce to have done that than the maple to have mysteriously expanded in just one area.  If the top was a little too "green" or not dried quite properly when the instrument was built, then that could result in at least the top plate shrinking a bit and causing problems.

@MrYikes: The sound post wasn't glued in on this one.  But it was in tight enough that it took quite a bit of force with the sp tool to get it loose, even with no bridge or string tension on.  I'm not by any means an expert on sound posts, but from what I've read, that would be too tight.  And I am sure that the glue used on the lower priced Mendinis probably isn't the good stuff.

My current approach is to keep the instrument in a humidified case for a week or so, with no tension on strings and no sound post in, to let wood maybe relax more into the shape it should be.

It isn't my violin anymore, so what ends up getting done to fix it will depend on what it's owner wants to do.  I can think of simple enough ways to force the ribs back into place enough to glue, but my current thought is that bending wood into place and gluing it, it will just pop loose again the first chance it gets.

On the one hand, he'd like it in playable condition as soon as possible.  The other hand would be that he is interested in learning a bit about instrument repair because he is thinking about getting an "in the white" to try his hand at finishing up, so it could be an educational experience.

Unlike me, though, he doesn't have other violins or play other instruments.  So this fiddle is it when it comes to being able to make music instead of just listen to it.  And there's a fresh set of strings already waiting for it.

My current thought so far as a repair is to force the ribs back in and glue it and hope for the best.  If it keeps popping loose, then try something else the next time it happens.  I could wrap a bit of cotton twine around the ribs all the way around the instrument, using some padded wood blocks up near the heel of the neck to avoid putting pressure on the neck join and then just tighten the cord buy putting a small stick in it to give it a few twists.  Keep the instrument in it's case with a humidifier until the ribs are back in enough to re-secure the popped seam with hot hide glue.

Not as "proper" as some approaches, perhaps.  But it wouldn't take more than a few days to a week, and the end result probably wouldn't be any worse than it was before the seam popped.

Other approaches I can think of would be to take the top and bottom plate loose and re-glue to "average out" the differences in how the plates aren't matching the ribs, or to cut through the ribs in the problem areas and remove enough wood and then glue the additional new seams to get the "bulge" area back to a contour that matches the plates.  But those are pretty drastic, comparatively, and I'm leery of committing to those approaches when I still don't know what cause the problem in the first place.  My thought is if I move the plates or remove wood, then it would be an even bigger problem if the wood decides to try to go back to the original shape.

Push comes to shove, sure it is "only a 70$ cheapie", but it is also someone's only violin, and already has enough sentimental value that just discarding it and buying another wouldn't be an attractive option.

I would contact K-K (the people from whom you purchased the violin), I'm sure this is not the first occurrence and they may have other options for you or at least other insights.  I know what you mean about sentimental value in the violin.

Chances of a replacement after over 2 yrs would be unlikely, and it would not be what is wanted.

Not sure if it was bought through K-K, since I didn't buy it, my family did.

The Mendini company itself was much less than informative when I contacted them to ask what sort of wood the fingerboard was actually made of.  About all they would do was repeatedly offer a refund or replacement.  Which would be fine for some people, but it wasn't what I was asking about.  It wasn't a complaint, it was only a question.

No offense intended, Mr. Yikes, but I can't say as I share your faith in customer service departments for most vendors.

None taken.  They can be irritating if you allow them to be, but with persistence they will eventually give you an answer, and with even more persistence will give you the answer you were looking for.  It normally takes three or four pleasantly worded emails to do the job.  And I understand that replacement was not an option you would be interested in, but I do think they have information that could be of value to you.