Older violin has some quirks

Older violin has some quirks
Warping at the f hole, how soon does this need addressed?

So I just received a Suzuki student model from 1969, which has some fun vintage quirks but only one that concerns me at all. The top is slightly warped by the right f hole, so that the edge of the hole closest to the bridge is raised a little above the outside edge. I've tried to google the issue, but all I can find is information about the inside edge sinking, basically warping the opposite direction. That problem always seemed to be caused by the sound post being too short, so should I assume my sound post is too long?

The violin was shipped from Florida to Iowa, and it's pretty cold and dry here right now. I don't know how fast wood instruments contract and swell with humidity--I put a Dampit in as soon as I opened the case. So I'm wondering how quickly I should try to have this fixed. I'm fairly handy, and this is the only thing I'd hesitate to do myself.

The rest of it: the violin seems to be in totally playable condition otherwise. I restrung it with Preludes and I like how it sounds--it's pretty mellow, the upper strings aren't harsh and the lower strings don't rattle my teeth. It sounds more or less like the other Suzuki I started out on. It has Roth Caspari pegs with the little screws on the end, which I had never heard of and had to look up because at first I thought someone had just glued the pegs in place. I'll have to hunt down a screwdriver with a really thin blade to adjust them, as some of those pegs are extremely hard to turn. It has an old Roth De Jacques adjustable bridge, which seems serviceable, but I'll replace it some time soon. I might also replace the tail piece, which has a big chunk missing from the ridge that runs along the top edge above the holes. I don't know if that ridge has any effect on tone, I assume it's there because the strings put a lot of tension on that part of the tail piece.

Raising f-holes on the bridge side by the sound-post are SUPER common. Funny that you couldn't find that information. My Jan Larsson is way up there. All the expensive fine old Italian, French, English fiddles that I have played on in my life are that way. It's just a normal thing because the soundpost does not allow the wood to come down. Eventually they do warp. My violins maker made 5 new posts for my violin during the first years.
I searched for f-hole close ups on google images but most of the views are top side. Here are a few just the same. 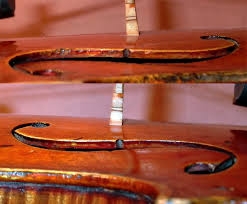 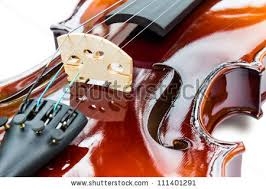 Ahh, thank you! My Google-fu must be off. I appreciate the info!