I broke my tailpiece last night, through ignorance and haste. I over-tightened my G, and instead of slackening and bringing it back up to pitch, I used the method beloved of guitarists when flattening strings (especially new ones) and yanked the G away from the fingerboard. The corner of the tailpiece responsible for retaining the ring-end of the string snapped like a carrot.

So, I had to repair it (I needed the violin for a project).

The pictures are in order of the following paragraphs:

Part of the raised purfling had gone forever, but it's not needed by the E, which has a fine-tuner. 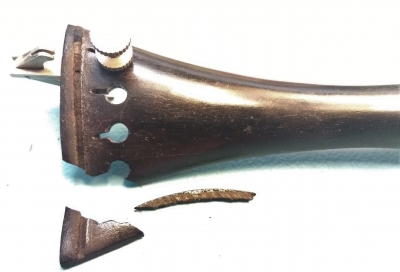 The purfling was carefully removed. 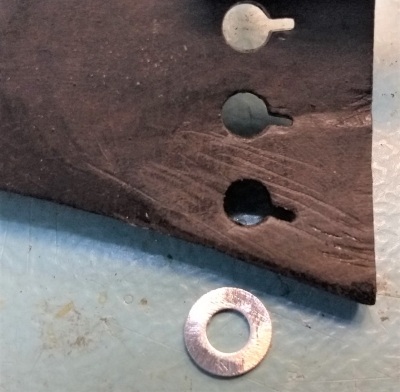 The corner was glued back on with 5-minute epoxy; this looks good, but it may not be tough enough to support the tension of the string. An M4 washer was keyed-up on one face with a fine file. 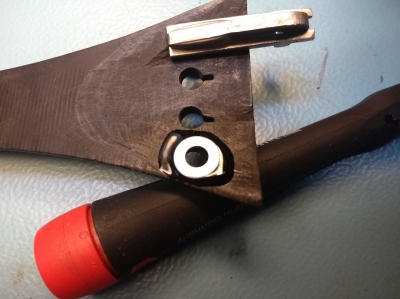 The washer was glued into place with a generous puddle of epoxy. 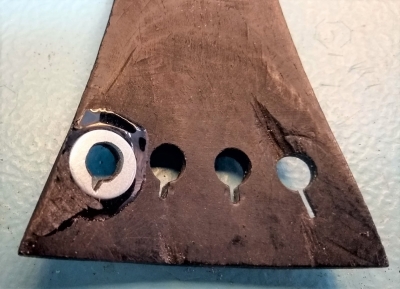 The washer was opened out slightly to match the existing hole, and a slot made to sit the string in. 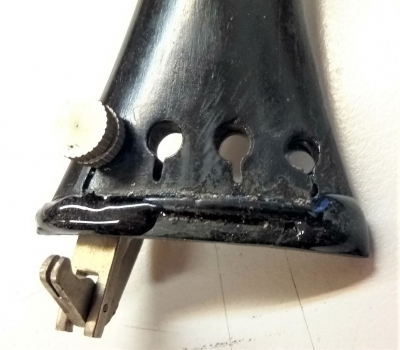 The purfling was replaced, moved over to cover the area ridden-over by the lower three strings. The remaining run of purfling was covered by a bead of epoxy, which was cleaned up into profile once the epoxy had cured. 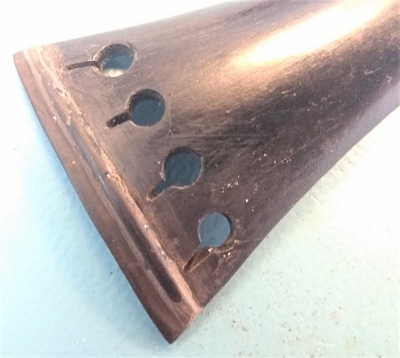 The top side was cleaned up with fine needle files, ready for a coat of shellac to hide the repair.

I may invest in a set of fine tuners, to remove the temptation to behave like a guitarist. I hope this brief article is of interest, and I invite candid criticism of the repair.

@Peter and others.  I think that the purfling you described on the tailpiece is a rather useless appendage anyway.  The repair technique employed is likely to be successful. You may want to consider a swipe of acetone on ebony before glue up in the future to remove natural oils.  And the steel of the washer may wear on the string due to the vibration it experiences (perhaps brass or copper washer would have been better for your purpose) but the g string is meaty so you should be ok.

Thanks for the tip about the acetone, @Irv, and the reminder about brass and copper as a bearing.

I had presumed that the purfling strip was there to prevent the strings tearing through the grain, which even ebony possesses. The E has a cantilever fine tuner, and I'm off after this to search for three more (or more likely a set) to install.

I'll leave it until tomorrow morning (Zulu time) before reinstalling and stringing; I want that epoxy to cure well before I stress it fully. I'll try to remember to take a photo and give a close-out report.

Unless you are having trouble using the pegs to tune, you may want to for go adding fine tuners.  The added mass to the system tends to have an adverse effect on acoustics.

I'll always need the pegs for coarse tuning, but to have the fine tuners for day-to-day tweaking will make life easier. They are of course removable, if the sound changes too much. The memsahib ordered them earlier, and I'll fit them when they arrive early next week.

I can use the pegs effectively, but I've been spoilt all these years with guitar machine heads; it's no mistake that I fitted cut-down acoustic guitar machines to my electric fiddle. The fine-tuners are a reversible $6 alternative to epicyclic pegs.

I gave the tailpiece a mop-over with French polish earlier, and it looks smashing. 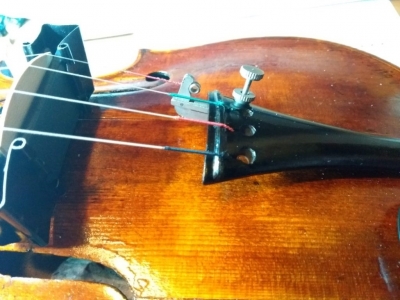 I couldn't wait; here's the finished repair, back on the antique violin. I needed to practice the Christmas project material on the instrument I intend to use for the recording.

Yes, that's a home-made mute. It's a pair of 3 mm x 25 mm mild steel strips covered with heat-shrinkable tubing, and firmly secured about the bridge with two 'Bulldog' clips with the handles unclipped. Fitting and removal are non-trivial tasks, but the mute stays on 24 / 7. It'll be off for the Little Drummer Boy recording.

@Peter and others.  Something from the archives. 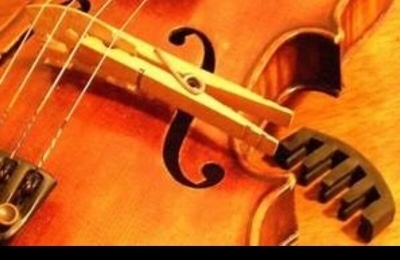