I have been working on a knock down practice violin for a few weeks now (ruining a few carbon bows in the process until I got one that I could successfully fold in half), and  I just came up with another problem.  Is there some certificate to tell customs that I made it and did not purchase it on the trip?  I plan to put Knilling Perfection pegs and a Wittner Isny shoulder rest on it, so I really don’t want to leave it and I don’t to pay duty on it.

I have provided a photo of the model I have been using for the build so you will have some idea what I am talking about.  When disassembled, it goes into a 15”x4”x4” bag including the bow. 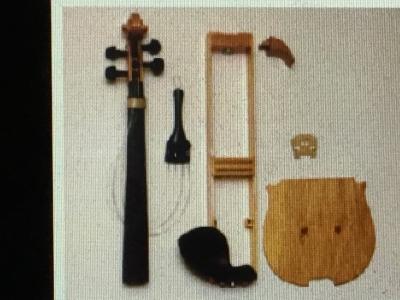 With all due respect, I don't think the customs agents anywhere will mistake it for one of those $450,000 violins that they reportedly seize on occasion. Hence, I personally wouldn't bother with a carnet ATA will will cost you over $200.

For peace of mind, consider bringing along receipts for the parts you purchased in the USA (pegs, chinrest, shoulder rest) ...and have a great trip!

Thank you, bocaholly.  I could buy four more second hand violins for $200.

@Irv - if you are travelling with it - it should not be an issue - get it scanned and labelled on the way out, should be seen as no more than part of your luggage.

If you are sending it separately ( like exporting it to, or importing from ) that could be a different matter depending on where it is/you are/  going - the "Traveling Fiddle" was sent to me in the UK from USA - and the USA being a "non EU country" ( at the time LOLOLOLOL - that's another story ) - you cannot believe the red-tape that was involved - that is - if you did it in the "proper way", of declaring it as a temporary import -  they wanted me to sign all sorts of declarations saying it would leave the UK within 6 months and so on - really - you have no idea of just how much time I wasted on this truly trivial task.....

Frankly, I gave up trying, and mailed them back saying, OK, "fine me if you want to, I give up"  that was 18 months ago and I haven't yet heard back, and "The Traveler" has now been to several other countries since then!  Anyway, the Traveler arrived and after being held hostage for close on 12 days in some form of detention centre, I was charged somewhere in the region of $25 or so for their "inspection" and added local tax on their time....  truly pointless - I could have bought and shipped, free of charge, items from China and so on to the same shipped "insurance value" (couple of hundred bucks - just in case it was destroyed in transit)

Say nothing, Irv, don't get involved in the detail, just take it as luggage ! 🙂

Hi BillyG.  I purposely built it so that I could stow it in my luggage, so that should be no problem.  I only bring up the issue because years ago I had a problem over an inexpensive Swiss graduation watch.  All was approved when the customs representative noticed a small crack in the crystal.  No idea why that made a difference to them, but it did.

Aye, @Irv - they are indeed a law unto themselves - there is no telling....

🙂 LOL - good luck with however you choose to do it ( like @bocaholly mentioned - I guess any parts invoices might help if there are any questions - but - equally - if questions arise - it could take days to get the instrument cleared...  I dunno what;s best really - it's all a gamble with these folks ! )

By the way - where are you heading off to, just out of interest ?