Been keepin' an eye on the edges of the top and bottom fer a year now as the lip at the tail piece button seemed to be smaller on one side than the other with slight gaping.

So , with this years monsoon season now there is a center seam seperation under the tail piece ...should have made repairs sooner maybe ....? a stich in time saves nine ...

This puppy has a big bass bar ...ya hoo ...have inclueded a top from another with a smaller bass bar for comparison .... 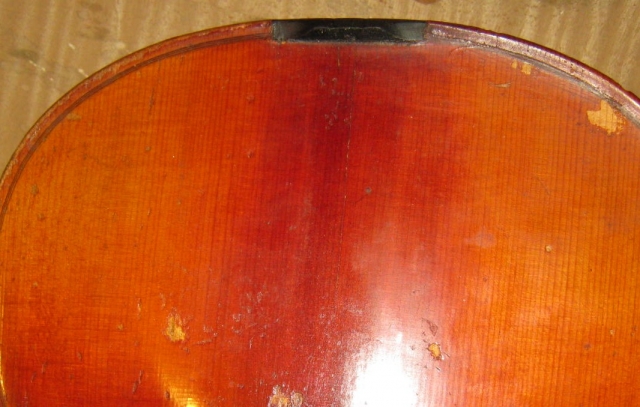 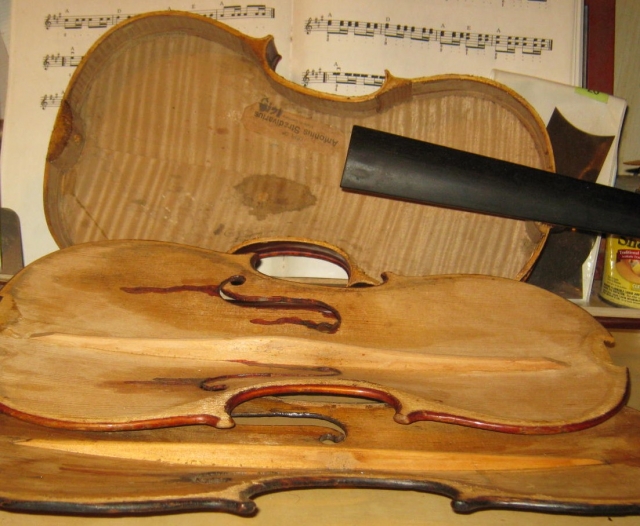 P.S.  I gave this post a 5 star.  We should have some system to know who has rated a particular post.  If there is a system, then I am not aware of it.

I will give it five stars also.  1. because I was looking so forward to seeing it. 2. because I so envious of what  you can do.

Does anyone pay attention to the stars? If so, I think it would be fine to reveal the raters of the stars. Something tells me forum-wise it might not be so peaceful?

Wow , thanks fer yer interest    .... so here's a close up of the rib displacement due to end block movement over time ...where the robot's right antenna is pointing ...and fer Toni , a fine , violinist proffesional hand model pointing to the inside movement area ..jk

I'm including inside /outside shots so y'all can see what's goin' on inside when the outside is all that can be seen ....it was possible to fix this condition with the top still on ....maybe avoiding the center seam issue all together if done early enough

also , all seam seperations , cracks , etc do not nessasarily have to be cleated as well ...proper cleaning of the area to be repaired is most important ... 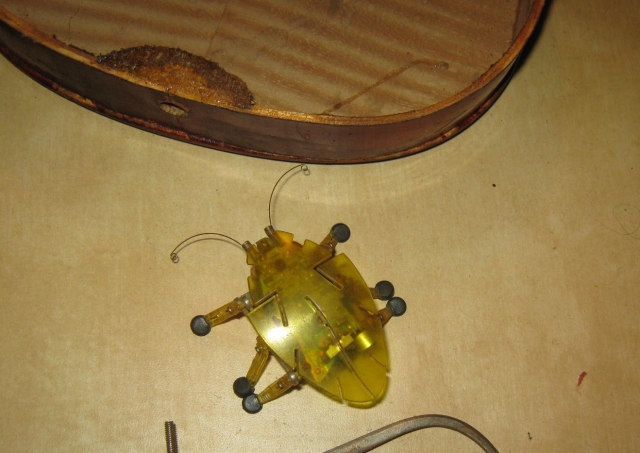 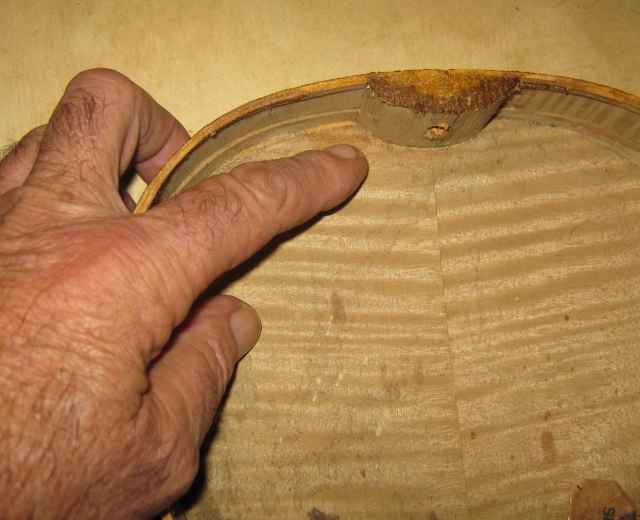 It is just amazing how lifeless a violin seems with the top off.  Makes me groan a bit.

and a darn good Luthier too.

coolpinkone said
For me that is a great pic.. and I am happy to see it.  I don't see the insides of violins.   Very cool.  Tucs... that is so very very cool.

I will give it five stars also.  1. because I was looking so forward to seeing it. 2. because I so envious of what  you can do.

Does anyone pay attention to the stars? If so, I think it would be fine to reveal the raters of the stars. Something tells me forum-wise it might not be so peaceful?

I too agree with Toni that something is not alright with the rating system.  Some(body/persons playing havoc with it.

I had a few PM's to start this kind of system to bring attention to the higher rated posts, kind of like what you do when shopping at amazon or looking for a good move, but if members use the system to discredit a members value, then I too believe it should be abolished. After it was first implemented I received positive PM's about it.

I don't think of the rating system as being all that important.. But it is kinda nice for being able to throw some stars on something you agree with, but maybe don't have much you can think of to add to.

I am not understanding how havoc can be played with it, since any vote on it is strictly positive.  It's not like someone can vote negatively, so far as I know?  And (again, so far as I know) it does not affect a poster's standing in tot community or where or how the post is displayed at all?

I think it is better than if we had, for example "like" and "dislike" buttons as many places do.  If someone posts something and gets a lot of "dislike" votes, that could be very discouraging and could be used as a form of "attack" by a group of people on an individual.

But the system we have here with the stars.. Well, if you gave it 5 stars you thought it was great.  If you give it one star you at least read it and acknowledged there was enough to it that you liked it a little, for some reason.  To my way of thinking that is all positive.  Liked it a little, liked it a lot, it is all still liking.

A lot of excellent posts and threads get no stars at all.  It doesn't mean they were bad, just nobody thought or remembered to vote on them.  I don't think that is a bad thing, just an indicator that most folks here consider the actual replies and their content as far more important.  The stars are just a supplemental way one can use sometimes (if one remembers) to react to a post.

Maybe I am missing something on how havoc is being played with the system, though?

I don't even look at the stars much less use them ...never really think about them ...

Tucson1 - interesting pics of the fiddle without the top.

As far as the post rating system goes - I don't pay much attention to the stars or use them but if others find the system useful I don't see any harm in it.

"A table, a chair, a bowl of fruit and a violin; what else does a man need to be happy?
~~Albert Einstein

So in order to bring the ribs and block back onto the right spots are you going to have to completely remove the ribs from the back or ?

I'm fascinated by this thread, I'm looking forward to building my own violin one day.

That's a good question and the answer in this case is   no , i can take the treble rib loose from the block and back to just before the area the rib needs to be in ...

also taking the bass rib loose from the back as well ...but leaving it on the end block .

Then clean off old glue , put the end block back on the bottom and reglue bringing the bass rib with it ....glue and clamp overnite ...

Next day , re fit the treble rib to back and end block , glue and clamp over nite ....

I will post pics when i do the repairs fer clarity but this should give ya an idea of how it goes ...no rush , just takes time to do a good job ...

Sorry , but i need some repair myself right now but will get back on this soon as i can It's easy enough to do this kind of work if ya take yer time ...

This is my favorite old fiddle.Lookin' forward to playing it again ....thanks fer yer interest ... 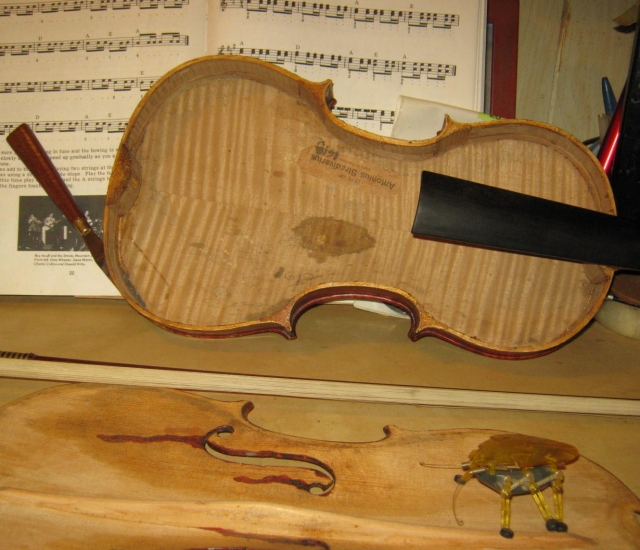 here's a close up of the end block that has moved outward on the treble side ...looks like a bit of a crack there maybe ...guess it will have to come out for a closer look

and , welp , here it is ...so i marked where the cracks are ...time to make and fit a new block fer sure ....when this happens the ribs can become streached and distorted over time requiring a bit of end trimming to but-fit back together again cleanly ...judging from the time staining on the bass rib behind the block , the block was not a good fit on that side originaly ...

not a biggie to do , just takes time ...goes ta show that what at first glance can seam minor can get more involved as ya look closer ...i have found them in this age with cracks in both end blocks ...so happy to say only one this time... 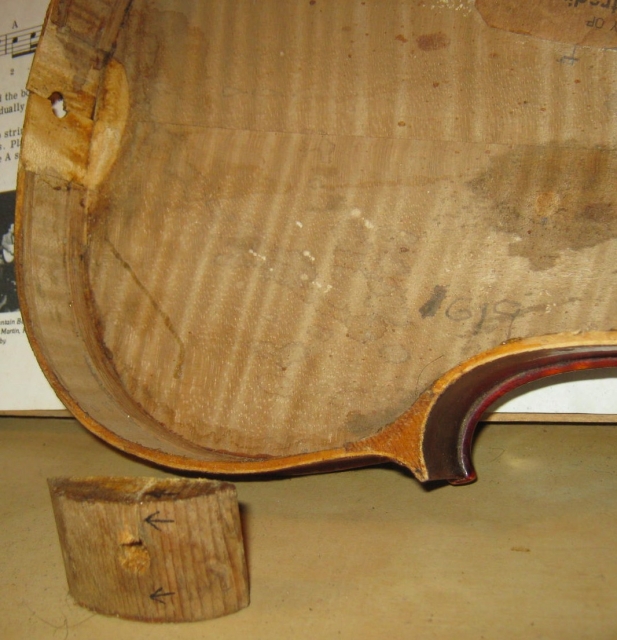 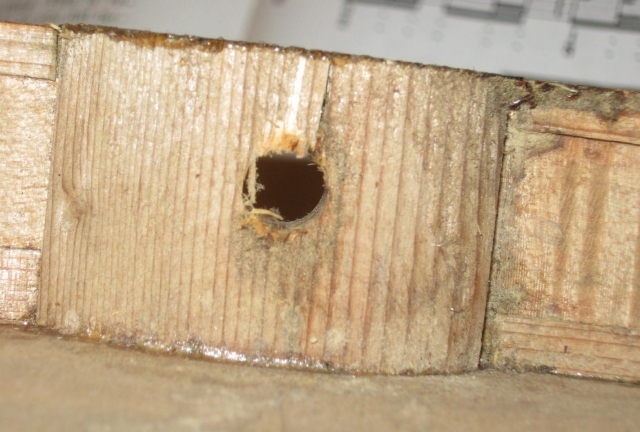 soooo, now that all areas in need of repair have been identified and the broken end block removed , i'll start a new thread fer repairing and putting back together ...stay tuned fer more fun ..

I think I can speak for most of us and say that we love this sort of thing.

Thanks for the posts Tucson1.

That's really awesome that you've got the know-how to do that on a fiddle. I'm thinking I'll start by getting a fiddle 'in the white' and copying it out in the garage.

Now when you remove the glue are you doing it with a heat gun or a hot knife or what?

I have a fiddle that the end button is starting to slide upward, it would seem that the fix for that would be plugging and re-drilling the hole at the proper angle, is that correct?

And thank you for showing us your fiddle project here, it's definitely must-watch for me

Think i'd get a book on how to build a violin and watch some vids ...in the white is a good idea as well ...ya can check the top and bottom graduation etc , practice finishing and gluing ....

you'll see lots of vids on gluing / removing glue , etc ..use the one that suits you the best ...i use an eye dropper with alcohol a long a seam and two  artists pallet knifes to remove the top ...no heat needed ...if you get alcohol on the finish where ya don't want it just remove with a swipe of yer finger ...if the varnish blushes it will polish back nicely .but that's just the way i do it ...some folks would have kittens if they got alcohol on their finish but i have had no problem with it myself

But this is if yer fiddle was made with hide glue ...if it's a newer violin it may be modern glue which will require a hot pallet knife ...no alcohol ...

Find a vid fer yer end buttom fix but yes , plug and re drill , then use a taper reamer to re fit yer peg ...taper should be 1:30 if a newer violin