Adventures of an ambitious late-starter violist

The orchestra concert went well. Not much more to say about it, especially because I haven't seen any video from it that I can post. I now have no orchestra commitments until January, which means I can focus on technique and solo rep for a while.

While I was focused on the concert, I didn't notice that another virtual orchestra video was released that I recorded a track for. There was a production backlog for a while because life got in the way for some of the people who do the mixing. It's finally getting cleared, with a whole bunch of virtual performances being released in October. So this is actually something I recorded for back in January, finally out now.

This is the first movement of the Serenade in D major, Op. 36, by the early 20th century Czech composer Vítězslav Novák.

I haven't recorded anything for virtual orchestras since the Boulanger piece I posted earlier, but I do have plans to record a couple more tracks this month for projects that are relatively low effort for me because I played the pieces recently: Uranus from Holst's Planets, which I played in June, and the first movement of Brahms's 4th Symphony, which I played in September.

The project that I'm planning to host, Nepomuceno's overture to O Garatuja, is on hold until my brain is less foggy.

Oh, one more thing: this week I discovered (via YouTube) a viola sonata I hadn't been aware of, and it's going in the queue of pieces to learn eventually. I've already gone to IMSLP and printed the viola part. It's so obscure that a search for posts in all the Facebook viola groups I'm in didn't turn up a single mention of it, which is strange given how sparse the Romantic viola repertoire is. Seeing as Brahms is my favorite composer, and Ludvig Norman had exactly the same influences as Brahms and was associated with some of the same people, it's probably not surprising that I'd like his work.

The Viola Sonata is interesting - the last movement is crazy!

Would love to watch/hear you play it! 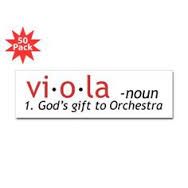