I agree that's coming along nicely.

Red-light syndrome gets most of us.

Getting a bit bored with it now, still mistakes, but its better than it was, think its a case of repetition more than anything.

I change pieces every 6 weeks Stringy.

Not a bad idea, I am learning others at the moment as well, but the problem is time as much as anything else. Even when I get this one down I still have he second part to do, but then again that should be a lot quicker as its mainly the same as the firat bit with variations, its if I can be bothered.

One of the reasons I like jigs is that they are extremely quick to learn, dont take much time, and are fun to learn. I am learning a vivaldi one at the moment as well as Irish and also one from the baroque book 4, as I said though trouble is time, I spend a lot on scales, and I dont have enough time to keep running through everything I know, its like that kelpie one in the holoween party, I just read that one right off, but to memorise it would take time, which I havent got.

going to have to start prioritising.

I liked it stringy !

Thanks Katie to be honest its still laboured in parts, in fact its very laboured at the start, like any tune you have to play them about a thousand times to get it smooth, this is no where near that yet, will be eventually, but its a very difficult tune to play, think its about grade 5, there is a saying apparently, that its too easy for beginners and too hard for² advanced players, slightest thing that is  out stands forward a mile but its good for learning technical things, and for shifting practice berween first and third, of which there is a lot

Maybe it will sound better when I put my new strings on that I just bought, should have got some months ago as these are dead, cant hear them ring anymore, new ones make a huge difference, just getting time to put them on.

I don't know what's wrong, but I can't view your video.

Emily, I took it down because it was garbage, which I only realised after I had listened to it some hours later, like a delayed effect. I think if you record something its best to not listen to it again for about 5 hours and then it is possible to gauge the faults. Itwas more or less in tune, probably less lol, but too slow and too fast in different parts, if I ever want to get any good I am going to have to concentrate a lot harder than I am doing at the moment, I am becoming far too happy with very mediocre playing which is why I am not progressing much.

I have unblocked it till tomorrow night if you want to take a look,  be warned its painful.

You say you like jigs, and I've been doing the BWV1006 Gigue for 3 days, so next week I'll do a video on how I practise it. I will abandon it for Bartok's Bagpipers in mid December no matter how I have progressed with it. You'll have been on Mozart for almost 4 months soon, so you are probably totally bored and fatigued.

Your not wrong there, you forgot to add frustrated though;), the problem with this one is that the slightest mistake sounds like an exocet missile, cant be even 2 cents out.

But I did take it on because of its technical difficulties, which have improved my playing in other areas, so that is one plus.

I havent been doing Mozart constantly though, in all I will have spent maybe 3 weeks or a bit less doing it on and off, which is why I said to Emily I will have to concentrate a bit harder. I hafe been practicing Allegro from ABRSM book five by vivaldi, which is quite satisfying and which I am happy with, which for meis a big thing, but its only a grade 5 so its not that hard to be honest, I looked it up and the Mozart is grade 7 apparently which is probably why I am finding it tricky. I have also kearned about 10 jigs and reels in the last few months, I may post one of them in the next couple of days if I get the time to record, I am working on playing a lot of the Irish ones wih mainly double stops which makes them a bit challenging, but I have been plahing a lot of thirds and sixths scales so I am halfway there hopefully.

Enjoyed your vid by the way, I think youtube automatically compress files that you upload, still takes a while from your end though, I have about 7 accounts on there myself covering a few different things not music related.

But I did take it on because of its technical difficulties, which have improved my playing in other areas, so that is one plus.

That's 100% my philosophy. As a kid I had to practise everything to performance and exam standard, but I just play violin pieces for technical stretching. If grade 7 stretches my technique, then it will show in grade 5 or 6 performance.

My video is rubbish in many ways, but I've got to forget about that and just do it.

Playing a piece too long will result (as we agreed above) in boredom, fatigue and frustration. This is because the concept of diminishing returns kicks in. This is why I drop a piece like a brick after I have been playing it for 6 weeks.

I feel that what you should work on now is developing steady rhythm. For this Irish dances should be very useful. (Irish airs are of course a different kettle of fish)

Thanks for taking a look, and for the tip on rhythm. Jigs and dance tunes are great fun to play as well.

This post is also probably my last on this forum, as well Gordon, I am on a couple of other ones, but I have been asked by a couple of bands to sing for them as well so my time here is most likely at an end, first and foremost I am a singer, fiddle was just a diversion really, I will stll post vids on my you tube channel, and maybe on other forums.

@stringy - Oh no! I will miss you here even though I understand your reasoning. It won't be the same without you.

I wish you the very best in everything you undertake, Ron!

It's great you have some new opportunities - and you should take advantage of everything that comes your way.  The World does work in mysterious ways & I will be happy, but not surprised, when you find your way back here! 🥰 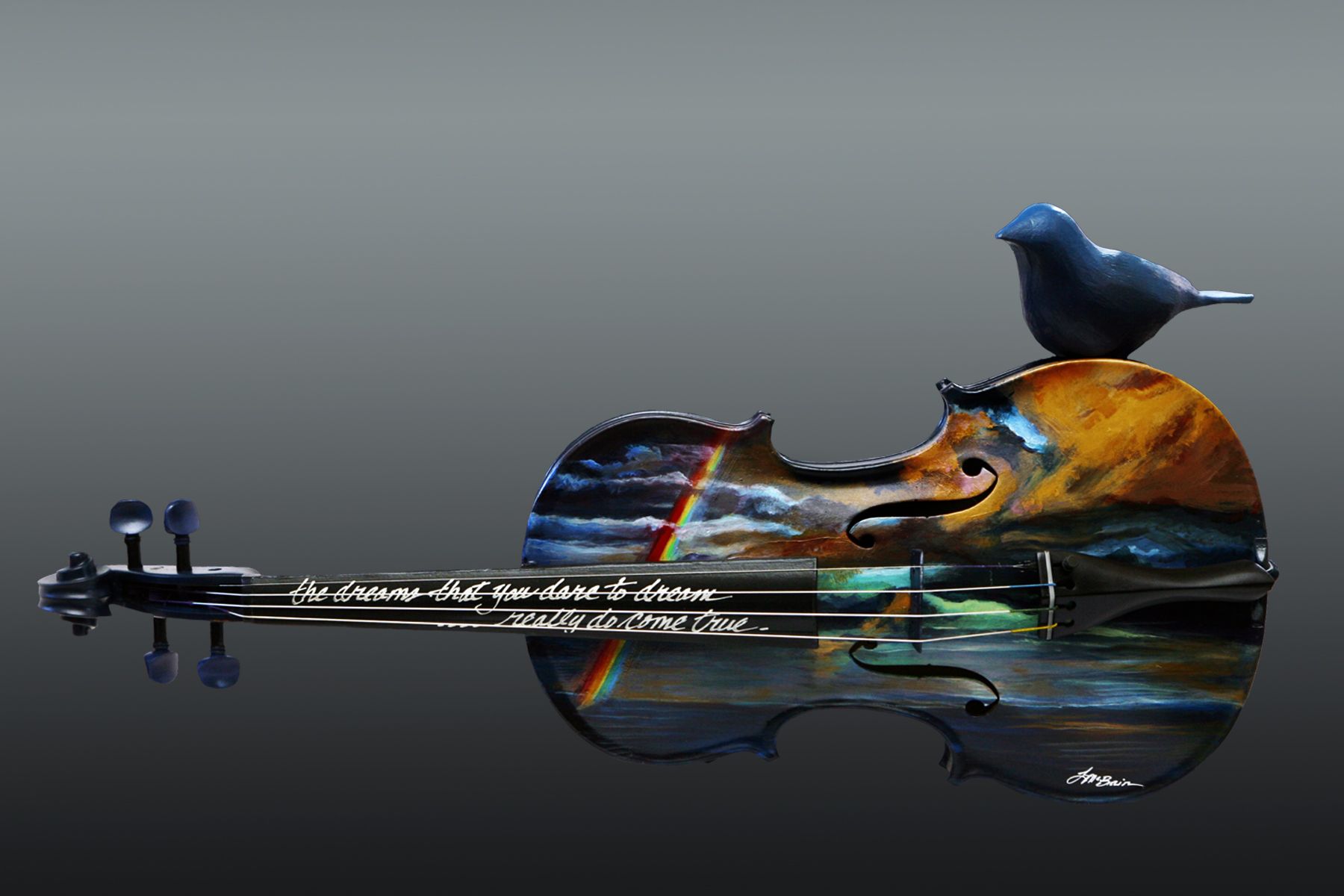 ↑ "Over The Rainbow" Violin by Lesley McBain

Good luck on your endevers, stay safe and enjoy life.

I'm  glad I had the opportunity to meet you here.

best wishes on your knew band stringy.  that sounds cool.  im a subscriber so will keep up with posts!.  Keep playing violin too now.