Too right! Any ideas?

This was incredible!!!!  Everyone did such a great job & the costumes were great!  I so want to participate on the next one.....

If the group is taking ideas, what about a fiddle tune, like "Swallowtail Jig" (which was taught earlier this year), it would be easy to layer parts/skill levels.

Or what about "On My Own", a beautiful song from Les Miserables,,, or are these supposed to be current topics/scores?

Or what about a Beatles collage like "Blackbird", "Yellow Submarine", "Penny Lane", etc.?

You know, I forgot to mention, what would be really cool, is if there was a way to identify the players as you saw them; it might "cheese it up" but it would be more of a personal connection with whom is performing.

Very impressive you guys!!! It sounded great and looked fantastic. Excellent job fiddlerman. You have inspired me. I want to try the next one too.

Oh I loved all the performances!!  Beautifully done!  I have already shared this on my Facebook just so I can see it over and over.  Everyone did so well!

As for the next project?  I would honestly like to see something "spooky" themed for Halloween, it is only four months away.  Like "A Night on Bald Mountain" perhaps?  All due honestly, I want a Halloween one because by that time I'll have a violin and enought practice that I might sound decent, lol.

Whatever the next project, count me in!  I look forward with eager anticipation!

"Everyone is a genius. But if you judge a fish on its ability to climb a tree, it will live its entire life believing that it is stupid." -Albert Einstein

congratulations! That was very cool, and the music sounds great. Hopefully I can join you guys in the next project!!

DragonLady,
I am SOOOOO sorry. I just did a search and found your video. It was the only one in a completely different folder called "He's a Pirate" videos. I guess I forgot about it and created a new one later when it was time to take in the videos. I would have definitely used your video and you had a cool outfit too. Darn, I really feel bad now. That sword in the background would have been a great addition to the atmosphere too.
I have to be honest and say that the timing was not right, I tried to line it up now to redo it now but it didn't work. Did you use the click track from the project page or a how to video when you recorded yourself? Did you share it with everyone here? I am sure they would love to see it.

DL, please post your vid on this thread; I know I'd love to see it and I'm sure everyone else would love to see it too!!!  Especially since you put so much effort into it, it would be an absolute shame for it to go unseen.

It was right here in the project thread! 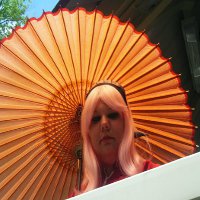 I was thinking the timing was off and I did use the clip track. Oh well, I'll try to do better on the next project.

16 years of experience and relearning.

Stay with it DL andforthe next project you'll be great. Just think you have only 4 posts left before no more math.

Who uses a built-in camera on their laptop to record their videos? I have never tried it.

I still would have included you and your video. I would probably have cut in the sound that worked and definitely used your cool video.
Again, I'm so sorry, I don't know how that happened.

Did I leave anyone else out? If so please let me know.

Congratulations to everyone. I am beaming for all of you.  I am so glad to have learned the song a little and hope to be up to snuff for the next.

I am sharing the video with everyone.  It is so awesome.

Pierre you are just a wonderful person to put that together and make so many people feel good and learn!

FM is the greatest for sure.

But I could never do it alone.

This was so good!  I watched it like 20 times already.  Wish I had participated.  Next time for sure!  Great job all!

Awesome!  I'm sorry I didn't get in on this one due to a loss of internet and other problems, but I'm ready for the next one!

I've learned so much from my mistakes that I've decided to make some more.

I was asked to play the violin at a party last night but declined mainly for 2 reasons, 1) I'm crap and can't improvise , and 2) I was probably a little drunk.
Then, turning it over in my mind and having a beer with breakfast this morning I had an idea.
As we had a PA system here (one if my guests is a beautiful singer and did a few numbers), I could have played our Hes a Pirate recording out over the system, and I could have done Part 5 live.
Shame I didn't have that idea last night, but thought I'd share it in case any other newbie finds themselves in the same predicament in the future, being put under pressure to play in front if their friends.

Terry!  The breakfast of champions (beer & cereal,,, it's an American tradition)

Sounds like the problem wasn't that you were a little drunk,,,, sounds like you weren't drunk enough [to not give a crap and just have fun] lol.

Here's a thought from an older, probably not wiser, father figure [no, I'm not trying to insult your mother, lmao].  I've been in the same situation twice in the past 8 wks; I know you don't play worse than me; and each time I was asked to play, the exact same rush came into my head, 'fight or flee', and each time, I quickly decided, WTF, and to just DO IT.  Now my groups weren't very large, a group of 8 friends and a group of 10 friends.  And everyone knew that I am a beginner and just accepted the "noise" for what it was; I got praise and I got a ration of shit, but all in all I got a bit of a kick out of it, nobody in the audience could do any better.

For me, this experience is EXACTLY like jumping off a cliff or a bridge or a platform into water,,, I just have to walk up and jump because if I stand at the edge for more than a second, my brain would probably tell me to take the safer route down.

Your idea would've been VERY cool; ya gotta do it next time!